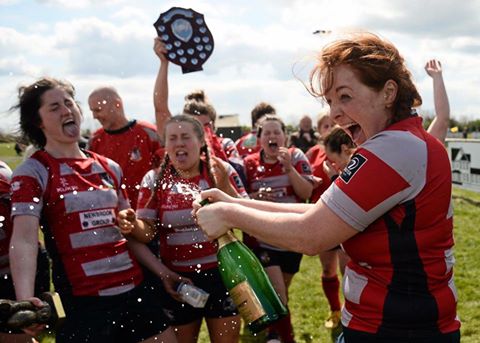 
It was quite fitting, as a tipped hat bookend. After 35 years as player and coach with Mullingar RFC the venerable Dave Farrelly went to the well for a final time, and the herd did not let him down.
Though the MVP went to Irish squad member Ellen Tait, she was rightly a little sheepish receiving the award in the light of the displays of some of her teammates.
Up at the coalface when the push came to the shove, Claire Farrelly hung off the Bagbot and struck three against the head in the final 10 minutes to keep her sisters in the danger area, and a still dangerous Kilkenny on a very necessary back foot..
Out behind Jenni Gibson was so rock-like in her stoppingness that we actively considered swopping the second syllable of her surname for-raltar, whilst the CCL entertained themselves by ripping new holes and nightmares into the psyches of the Kilkenny women.
However, the key of the day was wielded and turned by the heroic Claire OÂ¹Brien who turned the line-out into a childsplay lesson.
Like a Spitfire in the Kent skies from the summer of 1940, every time she went airborne in the face of overwhelming odds she still claimed aerial supremacy.
It is a little hard to believe on the back of this display, that she is quietly following Dave to the pipe and slippers, but it is appropriate that if youÂ¹re calling it a day that you do so on your own terms - and at the top of your game.
Mullingar started in full confidence, and with OÂ¹Brien on prime pilfer, and Molloy mad to get on the end of whatever Tait would ship her, the herd spent most of the first 20 in the Kilkenny half.
Indeed, such was their supremacy that the only posession Kilkenny earned was from Mullingar mistakes.
It took them a full 15 minutes to mount anything close to threatening, and when they did Holmes met it with the full yoghurt.
In the 20th minute it looked like Tait had manufactured a gap for Molloy down the right blind, only for her to be tackled into touch on the corner flag. But this was the beachhead.
OÂ¹Brien went sky-robbing, and they rumbled in to the Kilkenny line with menace.
Twice Mullingar cut at the line and were rebuffed, before the peerless OÂ¹Brien decided to show her teammates that she was equally adept at diving horizontally as she picked from the rear before self-launching over the prostrate lot to land the most popular try since Teenie broke her duck last year.
One wouldÂ¹ve thought this was to be the launch pad, but inexplicably, the herd nodded off, and Kilkenny were back in the game within two minutes.
Taking on the semblance of decapitated poultry, Mullingar began leakng a litany of silly penalties and were within spitting distance of a first yellow before being rescued by the halftime whistle which they welcomed still two points to the good.
The halftime words were enough to gird the girls, and proof of intent was quickly shown by Katie ÅThe ExocetÂ¹ Layde who absolutely folded her unfortunate  opposite in a hit not heard since Mitch Planten roamed the midland plains.
Eleven minnutes in Kelly got her first proper gallop and broke through to the KIlkenny 22 and won a penalty.
Mullingar collected in the corner and went for it, but despite four sustained minutes of pressure, could not cross for the breather score.
Kilkenny were playing for their lives, but one couldnÂ¹t help but feel that the Heifers were still playing within themselves, and a consistently grizzly Taite was a fine indicator of this.
Then, with 24 minutes gone in the second half the breakthrough arrived.
Mullingar won a penalty on the Kilkenny 22, and Taite took the quick sly responsibility.
The posse backed up and recycled at deadly pace through hands out left where the pacy Molloy was at full tilt, and she motored in with grace into the corner for a 12-5 lead.
This time there was to be no nodding off, and the herd pushed for closure.
With 12 minutes remaining the ever-dangerous Taite broke through at full dander  and had only one to beat for a huge solo score.
Inexplicably, she stepped inside and was rip-robbed with no-one minding the house behind her.
KilkennyÂ¹s fastest woman was the benificiary and she scalded all of the HeifersÂ¹ pacemakers down the left line for a score completely against the run of play.
This would have tied up the game but for the canniness of the wily oul trout Kelly who burst a gut chasing down yer oneÂ¹s scoring angle and denied her the two-point gimme under the posts. This was ultimately to be the difference.
For the last 10 minutes Mullingar unleashed the T-Bird to consolidate and Claire Farrelly went to town on the hook and Mullingar closed out like they couldnÂ¹t in Carlow.
With four minutes of injury time played, and Mullingar deep in the KIlkenny half, Smurf found her fullback and Taite put the pill in the next parish for a most satisfying consolation to the season.

Other news
Congratulations are due also to the boys u17s who won the Leinster Plate on Satureday, and especially to the u20s who won an unprecedented third Gale Cup 35-10 on Sunday against Cill Dara.
Also, alongside the aforementioned Farrelly and OÂ¹Brien calling it a day, the herd also bade farewell to two more stalwarts this weekend with the news that Aoife Bagnall and Adrienne Andrews are also hanging up the boots.
So to the four of them - prime heifers all - thank you. You have done your club some service.