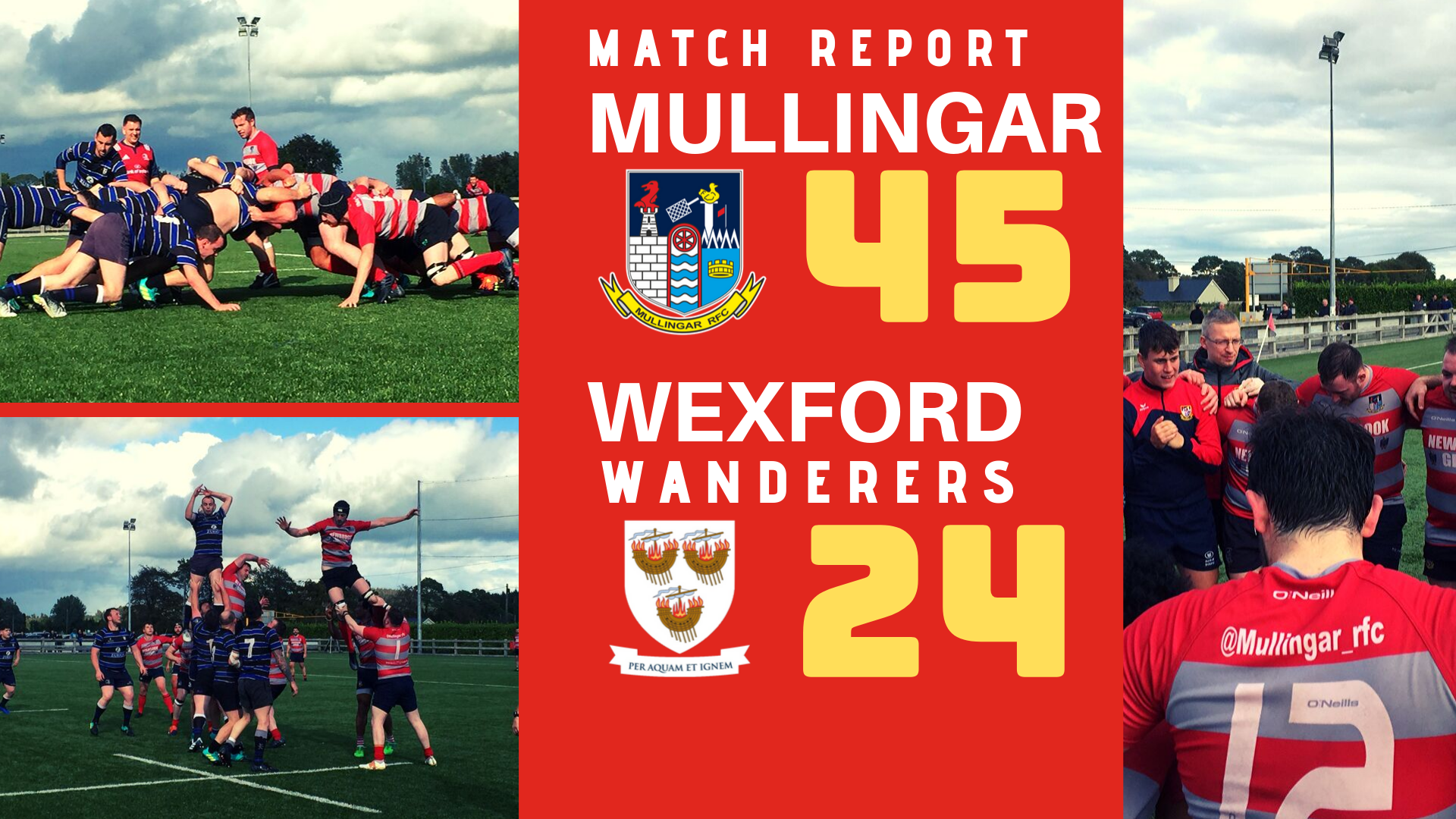 The first home game in the Leinster League, was against a team who we lost to last year both home and away. The result this year was a resounding bonus point win for Mullingar. The first 10 minutes of the game were mostly played in the Wexford half with good defensive work keeping Mullingar at bay. Wexford eventually brook out of their half and went on the attack. 12 minutes in and a good intercept by David Lynam on the wing and he was quickly under the posts for the first score of the day, which was converted by Mitchell Miller. We didn’t have to wait long for the next score as it came just 6 minutes later, when Eoghan Moore out sprinted his opposite number and with the conversion it was now 14-0. Another 6 minutes and Alan Brabazon broke through a tackle and Mullingar were now 19-0 up. Wexford got off the mark shortly after with a penalty to leave the score at 19-3. We had scored tries in the 12th, 18th and 24th minutes and just to keep the sequence going Alan Brabazon got his second and our 4th try in the 30th minute. The try was again converted by Mitchell. While on the score sheet it may have looked easy, but it was far from that. Wexford probably had more of the territory and possession in the first half, however Mullingar`s good defensive work and Wexford`s mistakes were costing them scores. Just on the stroke of half time after some pressure from Wexford they were awarded a penalty try, to leave the half time score at 26-10

The second half was just 3 minutes in when Mitchell Miller got his second Mullingar try under the posts after more good work by the forwards and he duly converted. Maybe we eased up a little, as we allowed Wexford to get 2 converted tries to bring the score back to 33-24. The work rate of the forwards had been excellent all throughout the game, ably led by Daz Brady with his front row partners of Johnny Moran and Alex Mitic. Daryl Quinn was very sound under the high ball and his second row partner David Faulkner was making some great tackles, and unfortunately had to be substituted due to an injury near the end of the first half. He was replaced by Cormac Dunne, who with the back row of Luke Finnegan, Brian Reidy and Lemeki Vaipula were doing Trojan work of putting in tackles and a lot of carrying. TC at scrumhalf was dictating the play and a lot of Wexford attacks were snuffed out before the ball got to their wingers by the hard tackling Mitchell and ably assisted by Donal McGovern in the centre. Chris Fox and Kevin Smyth came on and contributed to a good Mullingar defensive scrum in the 75th minute about 10 metres from our line. A quick ball from replacement scrumhalf and the back line were breaking down the field. Daire Conway made about 50 metres before passing to the impact sub Paul Maxwell who scored under the post for an easy conversion by Mitchell to push the score out to 40-24. With the last play of the game Daire Conway got in for our 7th try and a 45-24 win.

Two wins and the season is up and running with our next game away to North Kildare on Sunday October 13th with the seconds kicking off at 1.30 and the 1st at 3.00 The 2nds team received a walkover from Wexford yesterday and I`m sure they will be rearing to get going again in the Kildare venue