PIPPED AT THE POST IN ANOTHER EPIC LEINSTER LEAGUE BATTLE 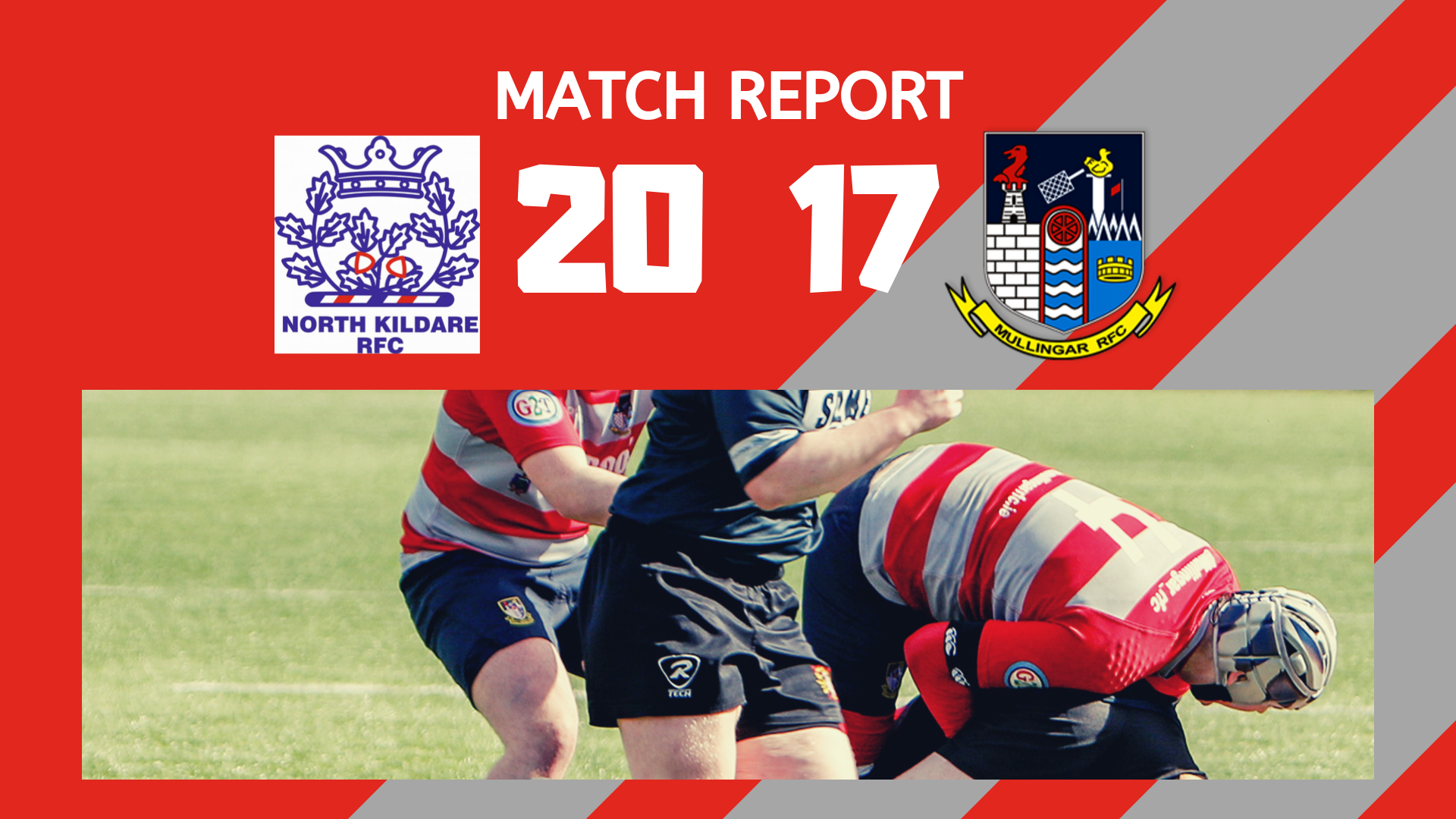 Mullingar came away with just a losing bonus point in a close and very hard fought struggle at North Kildare last Sunday. With both teams unbeaten in the league to date, Mullingar must now get back to winning ways and hope that the return fixture in January will see both teams still in contention for promotion at that stage. North Kildare, along with Coolmine, have come down from Division 1B and are so far unbeaten; so the bigger picture for this Mullingar squad, is to stay in the fight at the top of the table despite this narrow loss. Although hard for the players to take, it was not a bad performance.

Cormac Dunne had to retire injured, replaced by Geraghty, after a big hit on the Kildare number 8, big hits being required as both teams went at each other hammer and thongs from the start and throughout. Flynn hit the uprights from an early long range penalty. Then a Daryl Quinn block down and being quickest to the ball following a great sprint and grubber kick by the flying Maxwell up the left wing…Stuart Flynn missed the difficult conversion, so 5 nil to the visitors.

Johnny Moran dived over in the right corner after concerted efforts on the line were resisted by North Kildare. Brady (twice), Lemeki, Faulkner and Quinn were all held up just short but patience and control of the ball under intense defensive pressure got its reward. Again the conversion was narrowly missed, so it was ten nil on the half hour.

North Kildare continued to play structured and strong running rugby. Their loose forwards were tough to bring down and their strong running backs were probing and looking for gaps in the Mullingar defence. A yellow card penalty for Mitchell Miller just minutes before half time brought the score to 10 -3 and a further penalty (somewhat harsh) was repeated in injury time to make it 10 6 to Mullingar at half time.

The first period of the second half showed good Mullingar pressure and equally, North Kildare remained in the fight. It stayed 10 6 to the visitors until half way through and at 50 minutes, North Kildare piled on the pressure. Geraghty took a team yellow and Mullingar conceded a try which was converted to put North Kildare ahead 13 points to ten. The Mullingar reaction was both immediate and effective. Aggressive tackling from Maxwell and Vaipula, with aggressive running frl8om Conway, Lynam, Mitic and Moore, led to an overlap on the left and Quinn trundled over for his second try, converted by Mitchell to make it 17 -13 for Mullingar with fifteen minutes to go.

Mullingar then had their best spell. With fresh legs in Brian Reidy for Faulkner, Arthur Brabazon for Campbell and McGovern for Flynn, Mullingar played their best rugby for a period of nearly ten minutes.  Mitchell narrowly missed a penalty, Moore was kept out just short, and North Kildare held out.

Then North Kildare came back as all good teams do. Reminiscent of the keen rivalry of five seasons ago, North Kildare were not out of the contest, refusing to give up. Moore was yellow carded for a knock forward. Excellent pressure from the Kildare strong forwards was well defended. Mitchell was harshly penalised for playing the ball on the ground in attempting a James Lowe type regather. North Kildare kicked to the corner and Mullingar had to hold out forcing North Kildare errors in their attacks close to the line. Although time was passing and Mullingar were holding out, it was getting very tense. Indeed Mitchell set Conway away in a pitch long break, but North Kildare cover defence got to his chip ahead and regained possession. Then deep in injury time, relentless pressure on the line resulted in a try, the conversion being the last kick of the game. The North Kildare excitement and cheers were testament to the Mullingar effort, but brought no consolation to the hard working Mullingar squad.

In the final analysis, Mullingar could have added to their 17-13 lead when they had a good period, and had left some good opportunities to score slip in a close contest between two well drilled and highly motivated teams. Don’t miss the return fixture in January.