MULLINGAR GO SECOND IN THE LEAGUE WITH A COMMANDING PERFORMANCE 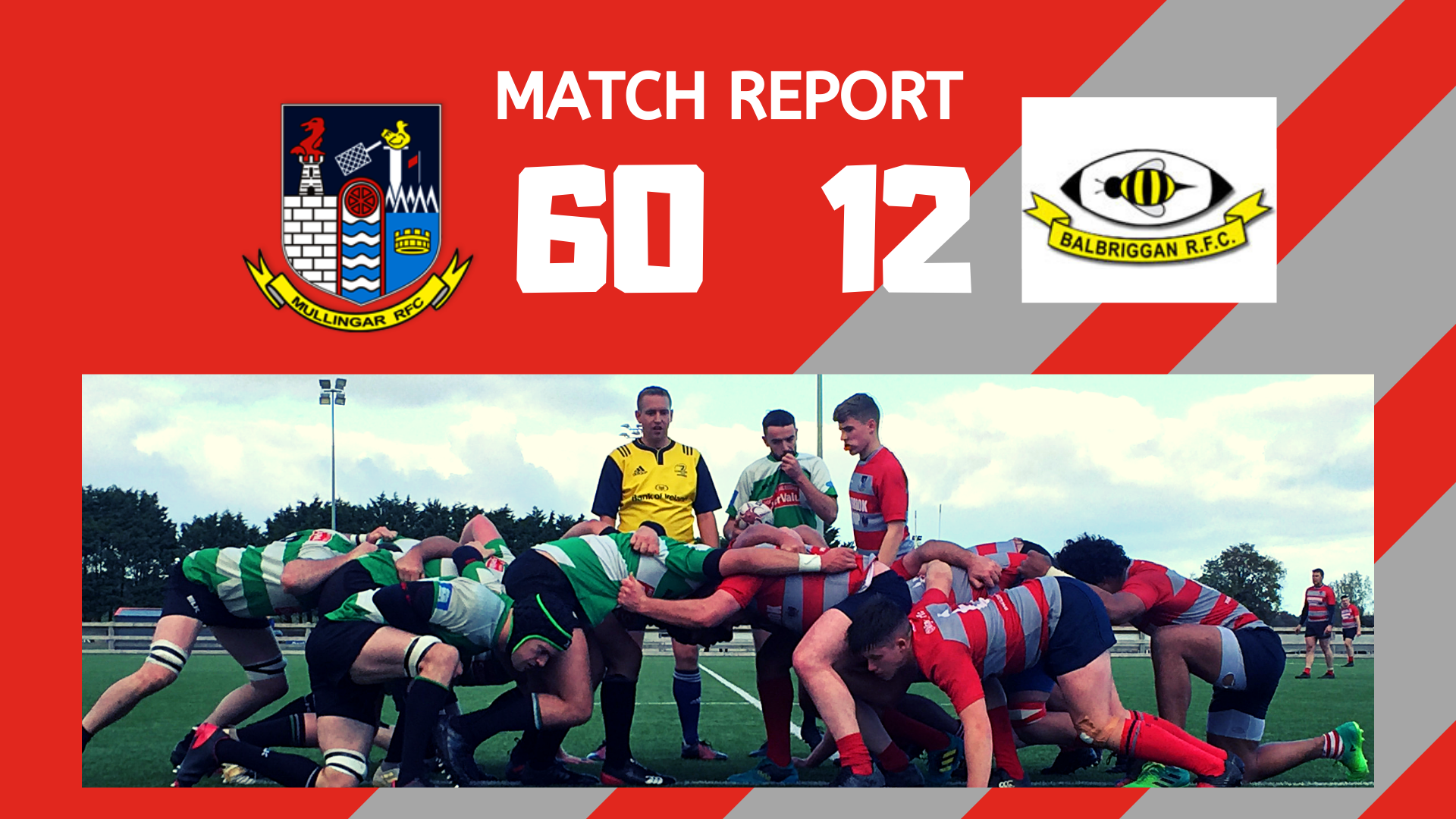 Mullingar moved into second place in Division 2A of the Leinster League with a high scoring nine try to two victory over a Balbriggan team who never gave up the fight.  The match was in reality a lot more competitive than the scoreline implies. The scoreline was boosted considerably by a purple patch midway through the second half, but otherwise, Mullingar had to work very hard for their scores and defend very well to contain the visitors to Shay Murtagh Park.

Mullingar defended well to absorb initial attacking pressure from the visitors. After 5 minutes, a Geraghty lineout and a Millar break created space for Daryl Quinn to crash over for a seven point lead with Miller converting. Further Mullingar pressure led to a penalty converted by Miller and then halfway through the first half, Mullingar had a couple of lineouts following penalties. The second resulted in a maul close to the line and then Brian Reidy worked the space for Aleksa Mitic to get over the line in the left corner for the teams second try and a 15 nil lead.

The Mullingar backs were getting good service from Sean Rock and Miller released his outside backs with purpose. Conway, Lynam and Brabazon had a couple of threatening runs down the left wing, but Balbriggan scrambled well to snuff out the opportunity. Balbriggan had a defender yellow carded. Maxwell had a trademark charge after a long Conway clearance, but Balbriggan held out. Then a penalty attempt was missed and Balbriggan went through a number of phases with their player coach in particular taking a very physical approach in breaking tackles. In the midst of a multi-phase attack, Balbriggan lost the ball forward and Eoghan Moore gathered well inside his own half.  He produced a couple of jinks and side steps and then outsprinted the covering defence to dive for a searing individual try on the stroke of halftime. Miller converted from the right touchline so Mullingar led 22 nil at the interval.

A mere 5 minutes into the second half, Mullingar scored a lovely team try. Brabazon received the ball and barged through in to the Balbriggan 22.  A quick ruck led to Darren Brady crashing towards the line, but he was held up short, but Maxwell was found and crashed over for the bonus point try. Miller made it 29 nil with the conversion. Aleksa Mitic was unfortunately injured and Johnny Moran took his place. The Mullingar scrum had been strong with Fox making his mark, and continued to dominate throughout. Geraghty was effective in the lineout and the hard hitting Vaipula made good inroads.

Balbriggan then had their brightest spell. The big second rows and their hard running centers demanded hard and low tackles. One strong hit from Sean Rock stood out, but in general, Miller, McGovern and Brabazon were solid and the backrow rarely missed an opportunity to knock Balbriggan back. Eventually however, Balbriggan got into a threatening position deep in Mullingar territory and despite strong defensive efforts, managed to breach the line.  A good conversion made it 29 7. The score stayed unchanged until midway through the second half.

Then Mullingar had a really good period of attacking rugby. Daryl Quinn charged up the left touchline and he found David Lynam in support, who beat two defenders to score a good individual try. Miller converted, 36 – 7. Wallace replaced Moore, Mitic replaced Lynam and Killian McNay replaced Fox. Wallace then made a lovely break, chipped ahead and gathered but was tackled short of the line. Quick ruck ball was moved to Brabazon who made a sublime pass to put Maxwell over for his second of the day; 41-7. From the kick-off, Maxwell fielded and passed to Sean Rock. He saw space and kicked towards the left touchline, one bounce and the sprinting Wallace collected and beat the cover to score; 46-7, the conversion attempt hitting the post. From the next kick-off, Maxwell collected, Rock broke to the right and put Quinn through. Quinn chipped ahead and this time the bounce worked for the supporting Daire Conway who gathered and scored under the posts. With the conversion from Miller, it was 53-7. Then a Mitchell Miller chip set Daire Conway away and he scored again beating two defenders on the way - with the conversion making it 60 – 7. To Balbriggans credit, they saw out the last minutes with a consolation try from their hard running centre who chose a great line to cut through the Mullingar defence, making the final score 60 – 12.