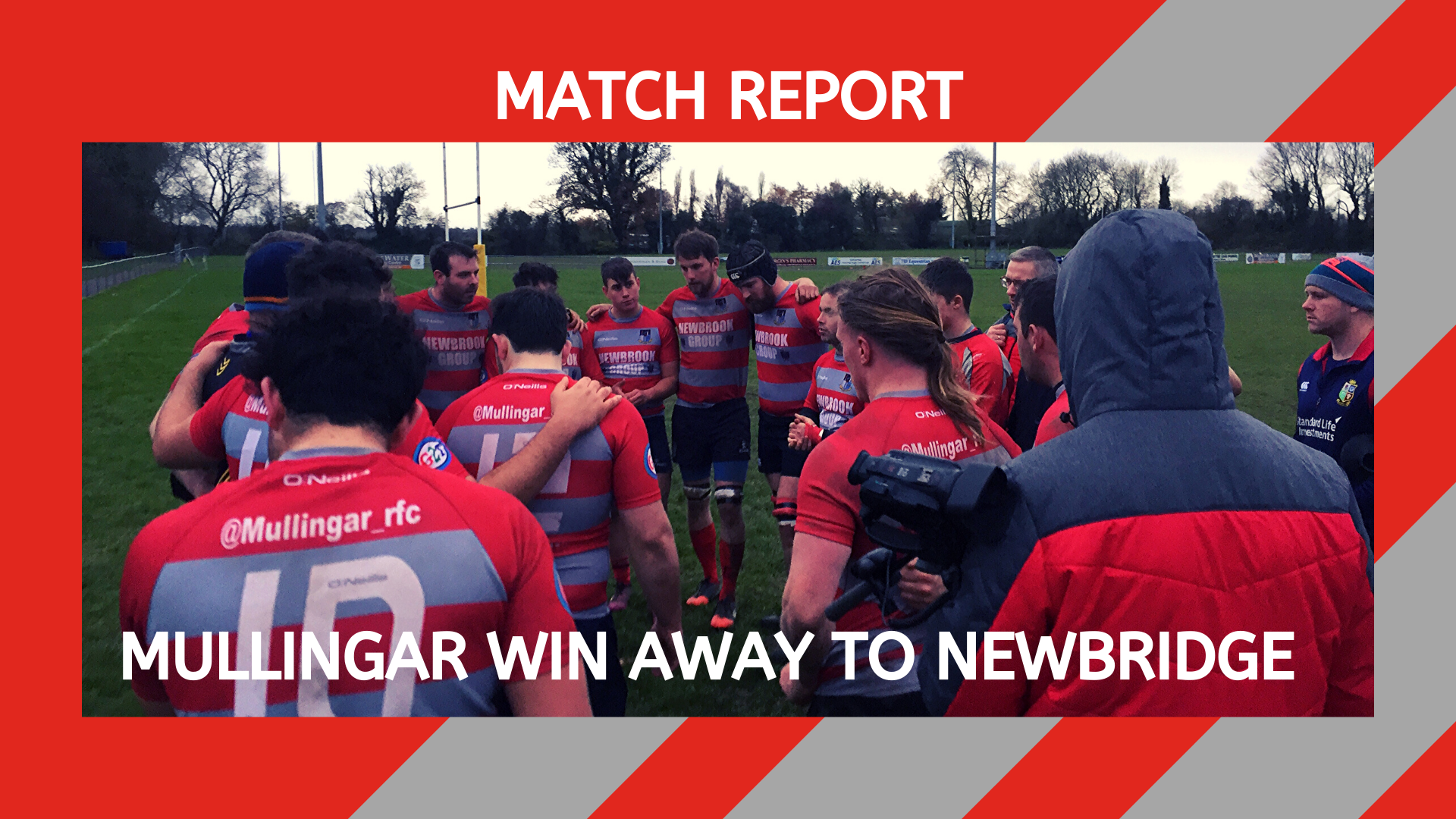 Mullingar travelled to Newbridge and came away with a win although they made hard work of getting the job done. In dry but cold conditions the home side started the better and indeed for the first 20 minutes of the game put the pressure on Mullingar and kept them pinned in their own half. Mullingar lost 2 lineouts in the first 10 minutes both in the middle of the pitch and both in good positions. Newbridge were very strong in defence and attack in the opening 20 minutes and possibly could have scored on a couple of occasions only for Mullingar`s good defence. Mullingar`s only foray into the Newbridge half in this period resulted in a penalty kicked by Mitchell Miller from the 40m line. The only area of dominance in this period that Mullingar had, was their scrum and indeed this remained throughout the game. Shortly after Mullingar going ahead they had another chance of a try, when a turnover by Alan Brabazon led to a break up the left wing by full back Sean Rock, but the pass to David Lynam was just behind him and momentum was lost. Mullingar were beginning to assert some pressure of their own and on the half hour mark they were over the Newbridge line but the referee adjudged that the ball was held up. From the resulting scrum Mullingar got over for the first try scored by Mitch Miller, who also converted. You felt that Mullingar might now get into their stride, and Darly Quinn made a good break, however the support was slow and Newbridge turned over the ball. Almost immediately Mullingar gave away a soft penalty, which the Newbridge kicker missed. Relief was short lived as 2 minutes later Mullingar gave away another penalty and this time Newbridge converted to put the half time score at Newbridge 3 Mullingar 10.

Due to a hand injury Eoghan Moore was replaced by Peter Mitic for the second half. Newbridge started the better in the 2nd half and were level at 10-10 after a try and conversion. Whenever Mullingar seemed to get into a good position, they either lost the ball or gave away a penalty or free kick. After about 15 minutes Daryl Quinn thought he was in for a try only for the referee to blow up as the referee had inadvertently obstructed a Newbridge player. Mullingar had a scrum 5m from the line only we gave away a penalty and the home side cleared. On the 20 minute mark Daz Brady got over for Mullingar`s second try to now go 15-10 up.  More indiscipline by Mullingar and the referee gave a kickable penalty to Newbridge for a late tackle. Duly converted and we were back to 15-13. Another attack resulted in a Mullingar lineout 10m from the home try line and again we gave away a free kick to the opposition for another infringement.  With 5 minutes remaining Mullingar won another penalty on the right side near the home try line. From a scrum Mullingar worked a number of phases and eventually Tom Campbell got over for Mullingar`s 3rd try, duly converted by Mitch.

The win leaves Mullingar 1 point behind Coolmine, who provide the opposition at Shay Murtagh Park for the next league game on Sunday November 24th. Mullingar will have to be a lot sharper that day and correct the number of penalties given away. However it`s always a good sign to get an away win against good opposition when you don’t play that well. There is a lot more in this side than we saw today in Newbridge and hopefully that will come out when we welcome Coolmine in 2 weeks’ time.