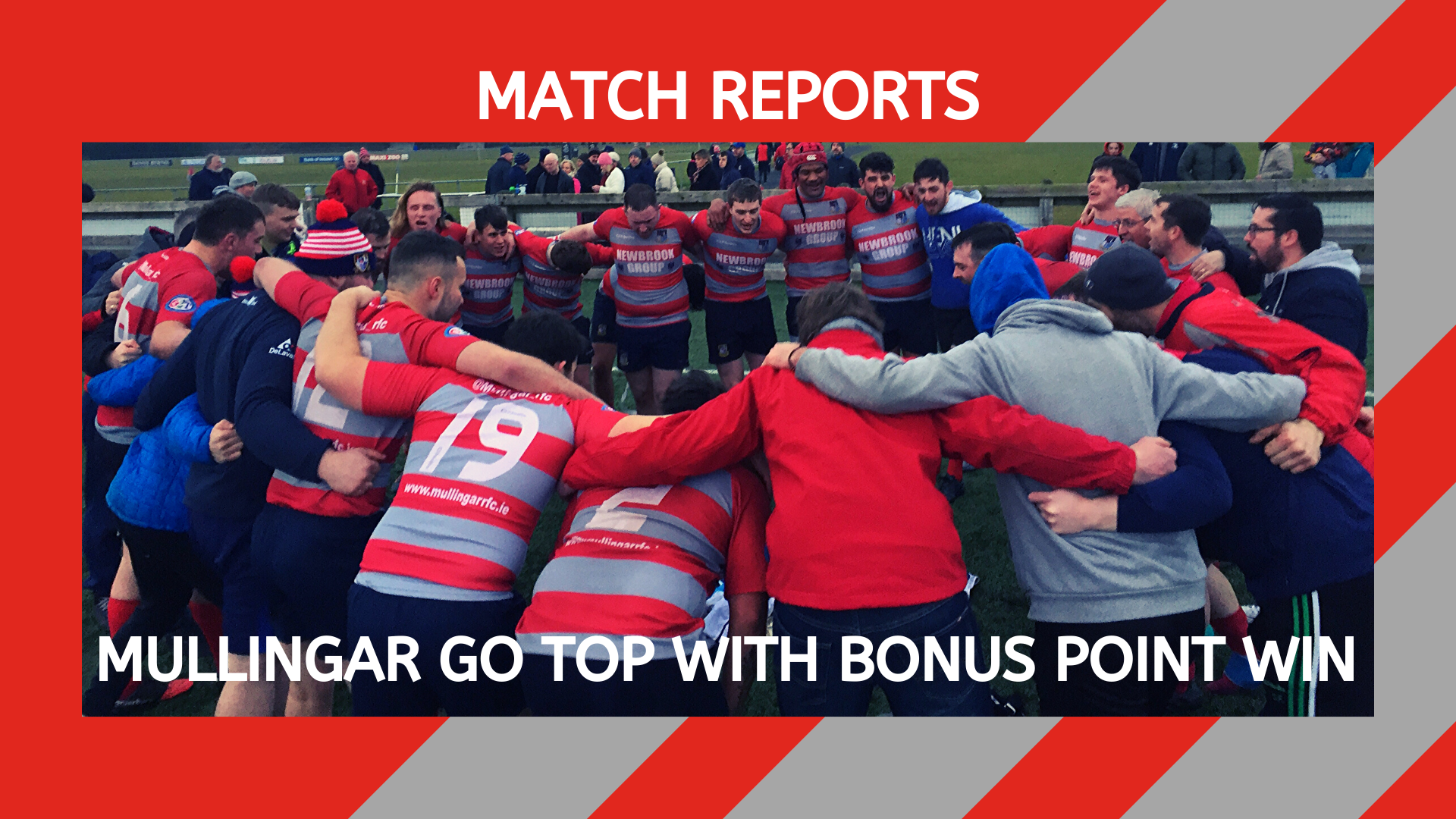 Mullingar climbed above Coolmine into first place of Division 2A of the Leinster League with a well deserved bonus point win.  Mullingar played some fine disciplined rugby and had the better of the opposition in defence throughout, holding them to two penalties and most importantly; no tries. We are now exactly halfway through the league and Mullingar next face Portlaoise, whose form of five wins in the last five matches means their visit to Shay Murtagh Park next Sunday is another crucial game for the Mullingar men.

Right from the start, Coolmine lost possession in their own 22 with a knock on forced by aggressive defence and Alan Brabazon seized on the ball to set up an early attack deep in Coolmine territory. Daryl Quinn was close to barging over, then Mullingar ran a penalty.  Lemeki Vaipula crossed the line but Coolmine managed to prevent a touch down. Unfortunately the ball was knocked on at the base of the subsequent scrum, and Coolmine cleared their line.

After 12 minutes, Mullingar applied more good pressure.  The strong running Coolmine number 8 was knocked back by a huge Maxwell tackle, and Coolmine conceded a penalty. Miller converted to make it 3-0. From the kick off, accidental offside in fielding gave Coolmine a scrum. From a ruck following an attack off that scrum, Mullingar were penalised for going off their feet and the subsequent  penalty made it 3 points each.  On 25 minutes, a dubious high tackle penalty made it 6-3.  Coolmine were leading despite only getting into the Mullingar 22 twice, but Mullingar held their nerve and stuck to their structures.

Then on 30 minutes, Mullingar won a line out in the right corner, Maxwell charged around to the blind side but was held up just short of the try line. Further drives from the forwards led to another Paul Maxwell carry and this time he barged over to the right of the posts and Millar converted to put Mullingar in front again by 10  points to 6.

Coming to the end of the first half, Coolmine applied a lot of pressure, but it was very well defended. The big Coolmine number 8 was double tackled and a penalty was forced, allowing Mullingar to clear their line to great applause form the home support. Coolmine attacked again, and this time another penalty was awarded but the kick was missed leaving the score at 10-6 at half time.

For the first ten minute of the second half, Coolmine applied good pressure, including a couple of scrum penalties. Brady, Mitic and Moran sorted out the problem however and the scrums were to Mullingar's advantage for the remainder of the game. Sean Rock intercepted when Coolmine were looking to break tight on the left touchline and after some loose play from both sides, Mullingar regained control with a scrum just inside their own half. Mullingar ran the ball going right, Miller and Burke sent Brabazon on a charge, he linked well with Mitic and then Maxwell barged through a couple of defenders and ran home from the ten yard line. Millar missed the difficult conversion, but it was a crucial try to leave the score at 15-6 ten minutes into the half.

Five minutes later, a beautiful score started with a good line out win by Quinn. A strong maul led to a yellow card penalty for a Coolmine forward bringing it down and Mullingar stuck the ball into the corner for another maul attempt. This time Coolmine managed to hold the ball up over the line. The resultant scrum was excellent and Miller chose his line really well to score from excellent go forward ball, converting his own try and the score was 22 – 6 entering the third quarter.

In the last quarter, Mullingar displayed really good control, limiting the opposition to very little possession or territory. Reidy replaced Alan Naughton who had put in a powerful shift. It was not a surprise that Mullingar scored again, this time it was a lovely bonus point try. Charges from Geraghty and Brady created good momentum deep in the Coolmine 22. Then Miller used Burke as a decoy and send the impressively balanced Sean Rock over, converting to leave the final score 29-6. Finegan replaced the happy Vaipula. McGovern replaced Burke, who had a wonderful game in attack and defence.  Fox replaced Brady and Mullingar saw out the last ten minutes with no great pressure.

Coaches Tom Campbell and Cormac Dunne will be happy with the disciplined defence - particularly the back three of Petar Mitic, Dave Lynam and Sean Rock - who covered opposition kicks and returned with interest; Rock in particular gaining ground and avoiding tackles with dancing feet. Burke and Brabazon gave the Coolmine back line no room in midfield.

Our second`s team were at home to the table topper from Coolmine on Sunday and came off second best.  Coolmine had won all of their games so far in the league and from the start put Mullingar under pressure, with all of the first 15 minutes being played in the Mullingar half. Our defence was pretty firm and repelled all the attacks. From a turnover in our 22 Arron Glennon broke down the left wing, however as he was tackled in the Collmine half, the offload did not go to a Mullingar player and Coolmine were able to build again.  Coolmine got on the score line eventually in the 25th minute with a try in the corner which went unconverted. No further score coming before half time, so we went to the break with Coolmine leading 5-0

There were ominous signs in the first half as Mullingar gave away a number of penalties and consequently lost ground. This remained the same in the second half with sometimes good positions being lost as a result of penalties been given away. Coolmine got their 2nd try 9 minutes into the second half, again in the corner, which again was unconverted to give Coolmine a 10-0 lead. A 3rd try which was converted in the 60 minute now put Coolmine 17-0 ahead. Mullingar had been defending constantly with good tackles from Killian McNay, Arron Glennon, Ryan Brennan, Darragh Lambe and Killian Kavanagh. Mullingar`s defence eventually tired and in the last 15 minutes some tiredness allowed the away side in for 3 more tries to eventually win 34-0. There were a number of good points from this display despite the score line. There is no doubt that there is talent in this team, getting a bit fitter and more cohesion would probably lead to giving away less penalties. Next up is Portlaoise at home next Sunday with a 12.30 KO.

Next match is at home v Portlaoise