MULLINGAR COME BACK TO WIN IN TITANIC BATTLE AT THE PARK 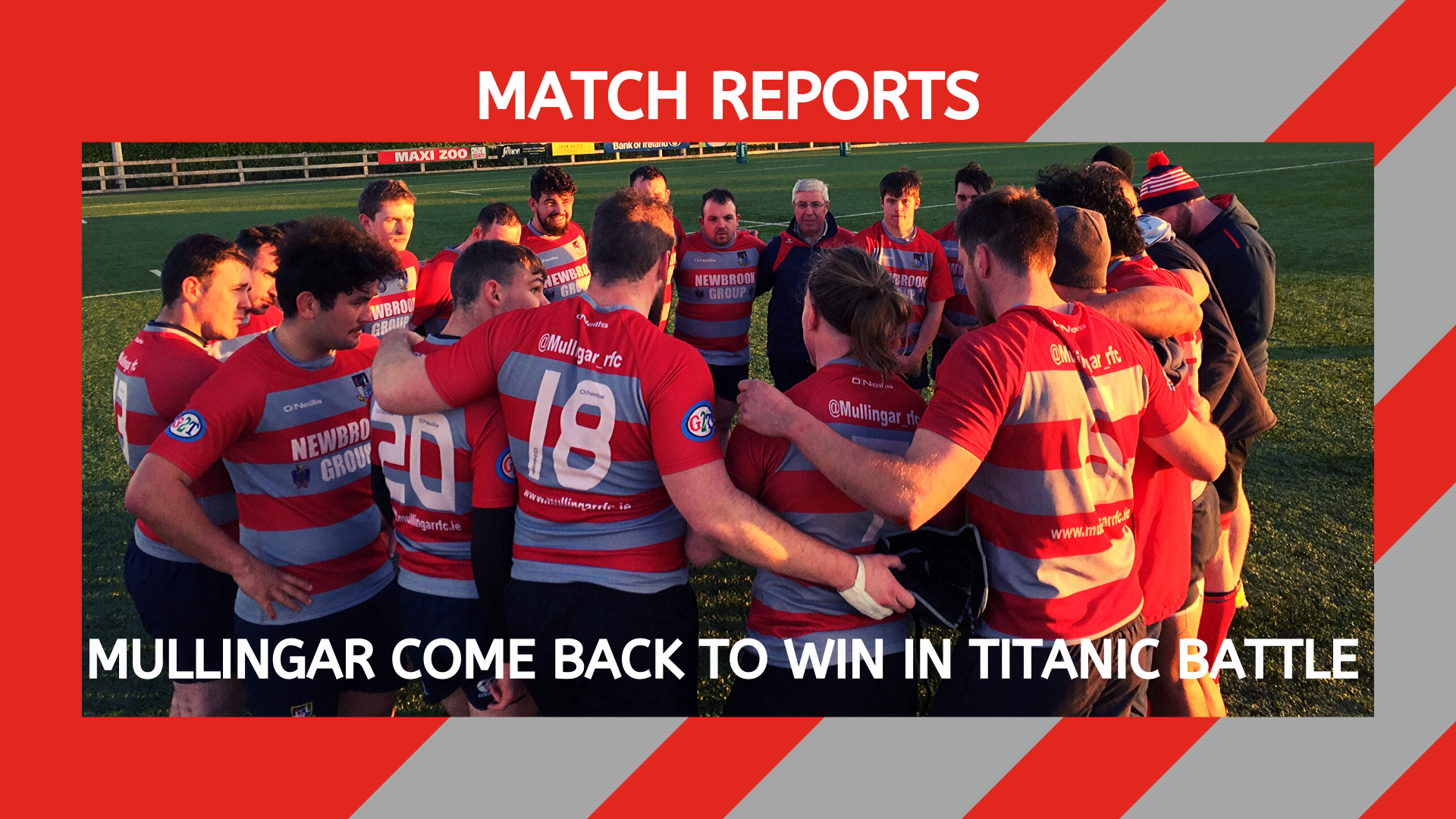 Mullingar maintained their lead in Division 2A of the Leinster League with a hard earned bonus point win. Both teams scored four tries and Portlaoise were in contention for large parts of this tight contest at Shay Murtagh Park. Portlaoise came fully loaded and brought their physical game and ran with intent taking their scoring opportunities very well. A win is a win, but it was a somewhat relieved Mullingar at the final whistle.

Mullingar applied initial pressure and in the first few minutes Portlaoise conceded a number of penalties, two for high tackles, as both teams tried to impose their game. Going offside in a ruck, a third penalty was kickable and Miller obliged, 3 nil to the Mullingar men.

Then Geraghty charged onto the ball and broke a number of covering tackles, barely keeping his balance to get all the way to the try line from halfway…. but lost the ball in contact just over the line and Portlaoise were awarded a 22 drop out. Portlaoise then put a few phases together and ran right, with their winger getting clear until a saving Maxwell tackle. But Portlaoise put phases together and protected their possession with one out runners, scoring a try from close in; 7 – 3 to the visitors after ten minutes.

Then Miller was yellow carded for some indiscipline and Portlaoise ramped up the pressure. They kicked a penalty to the corner. Luke Finegan contested well but was deemed to knock on and Portlaoise attacked from the resultant scrum. Their strong number 8 was hauled down but managed to offload and the supporting player was over before the defence could get set. The missed conversion left Portlaoise 12- 3 ahead.

It was important that Mullingar get back into the game and they did so from the kick off, with Burke winning possession. Charges from Vaipula, then Quinn, led to the defence being stretched and Maxwell took advantage to finish a great example of team pressure…..Mullingar had lifted their game when needed. Burke slotted the conversion, so 12 – 10 and the next score was crucial. Unfortunately for Mullingar, on 25 minutes, Portlaoise attacked and their big number 8 stayed on the touchline, called for the cross kick, and got the bounce to streak in at the right corner. The conversion was made, so it was 19 10 to the visitors, who had created and taken their chances very impressively. Now the next score was vital…for Mullingar.

Portlaoise ran the ball in their own half but Darren brady saw his chance and intercepted. From the next phase, Miller threw an accurate long pass to Lynam who made good ground on the left. Then TC and Miler passed right and great hands across the backline saw Rock put Mitic over in the right corner, converted well by Miller to close the gap to 19 -17. Then Mullingars best phase continued with a penalty to the corner on the stroke of halftime. The lineout was won and Maxwell charged over to put Mullingar back in front. Miller slotted the conversion again, so at half time Mullingar were 24-19 ahead, both sides having scored three tries.  It was a feast of rugby for the supporters with both sides looking to move it up for the second half.

At the start of the half, Brabazon made a great break down the left but was caught ten yards out. Then Campbell moved the ball to Miller, who found Rock who put Petar Mitic free with a lovely feint and perfectly timed pass. But Mitic didn’t manage to get the ball down in the corner. A penalty was awarded and Mullingar went for the lineout. The attempted maul was held up by Portlaoise, and Daryl Quinn received a yellow card for what the home support thought was little cause. Regardless of source, the last thing the home team needed was a yellow and it gave Portlaoise the extra man for ten minutes.

The second half turned out to have far fewer try scoring opportunities than the first.  Portlaoise played a lot of one out runners, with good offloading from big men, each hard to bring down. In fairness, the Mullingar defence was solid with all eight forwards putting in the effort required. Conway replaced Campbell going to full back with Rock moving to scrumhalf. Then on twenty minutes, a Vaipula  turnover led to Rock passing to Mitic. He chipped ahead despite taking a knock just moments earlier, gathered his own chip and raced to the line for the crucial score….. converted by Burke; 31-19. Miller was replaced by Aaron Glennon who went to centre with the impressive Burke designated to see out the game playing at outhalf.

Mullingar freshened the pack up with three changes for the last ten minutes… Fox replaced Brady, Reidy replaced Vaipula and Naughton replaced Finegan. Throughout the game, Mullingar had good first phase possession;  lineouts were much better this week with excellent throwing in from Alecsa Mitic and scrums were solid. However, Portlaoise kept the pressure up and Mullingar spent the last five minutes defending on their line. Eventually, with the last play of the game, Portlaoise got an unconverted try from close in and the match finished 31 points to 24, with Portlaoise getting a losing bonus point as well as the try bonus.

The next match is against Wexford Wanderers away. It is a big game if Mullingar are to maintain the lead in the division. Mullingar can improve and will need to renew their structured and disciplined gameplan, albeit this was a very worthy win against a strong and persistent Portlaoise.

Mullingar earned a hard fought win against Portlaoise in what was a very competitive game. Mullingar started better and were first to score when a good move was finished with a try by Ryan Brennan. The conversion just missed (the corner flag) and the score remained at 5-0. Mullingar`s lead only lasted until the 17th minute when after conceding a couple of penalties Portlaoise were camped in the Mullingar 22 and eventually got over for a try, which was unconverted to put the score at 5-5.  Donal McGovern had to go off shortly after with a hand injury, to be replaced by Stephen Derham. Mullingar`s forwards were fairly competitive against a heavier and more experienced Portlaoise outfit. The front row of Matt Looram, Kevin Smith and Robert Burge more than held their own in the scrums. It was however on the 30 minute mark, when the concession of 2 penalties in the loose in quick succession, resulted in Portlaoise getting in for their 2nd try, which was converted to put the visitors up 12-5. The Mullingar backs did look like they could score once they got good ball and it was a very good move which got the home side their 2nd try.  Just before half time a Mullingar scrum 10 metres inside our own half was won and the ball moved quickly from scrum half Cian Burke, via outhalf Ryan Brennan to Niall Derham. Niall made some good ground before passing to Shane Raleigh just inside the Portlaoise half. Shane managed to evade the Portlaoise defence and finished with Mullingar`s 2nd try, which again was unconverted to leave the half time score at Mullingar 10 Portlaoise 12.

The second half started well for Mullingar with both second rows Killian McNay and Cillian Kavanagh prominent. Killian was making a lot of good tackles and to show his versatility went on a 30 metre jinking run mainly across the pitch. Mullingar put a lot of pressure on Portlaoise and were camped in the Portlaoise 22 for a good period. While Mullingar conceded too many penalties in the first half, it was Portlaoise who were conceding too many in the second half and the referee eventually showed one of their players a yellow after a few too many high tackles.

Mullingar got their 3rd try with Niall Derham going over on his first game after a spell out injured.  This try also went unconverted but Mullingar were now back in the lead at 15-12. A number of players from Mullingar`s bench came on in the second half and Cian Cleary replaced Cian Burke at scrum half.  Cian Cleary converted a penalty to put Mullingar 18-12 ahead with about 5 minutes left.

Mullingar finished the game strongly and it was great to see the number of players now available and fighting for places. Mullingar move up to 4th in the seconds league table and hopefully keep the momentum going. Next Sunday sees our longest journey down to Wexford Wanderers for the last game before the Christmas break.

Next match is away to Wexford Wanderers