MULLINGAR WIN AWAY AT WEXFORD WANDERERS TO STAY TOP 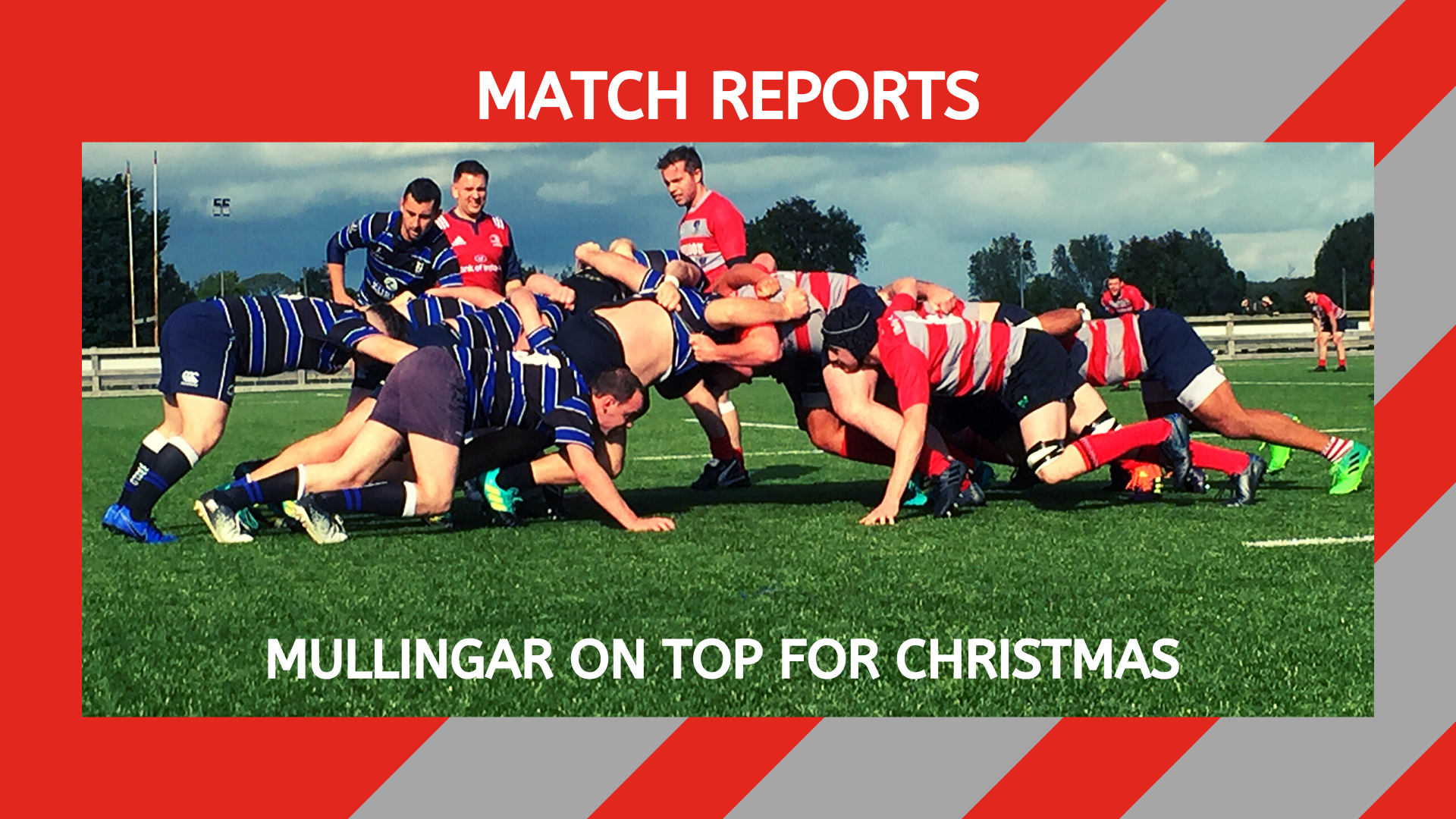 Mullingar extended their lead in Division 2A of the Leinster League with an away win in Wexford by three tries to one. There was quite a strong wind but not as bad as the storm warnings had led to expect.

Mullingar had a fine first half, starting with strong initial pressure and in the first few minutes Wexford conceded a number of penalties. After two penalties in quick succession, Mitchell Miller kicked to the corner. A good attack followed a Geraghty lineout, with Maxwell, Vaipula and Geraghty charging at the defence. Another penalty was kicked to the corner. This time Quinn won the lineout and Maxwell charged around to make space for Alecsa Mitic who got in for the try in the corner. Five nil after five minutes.

For the next 15 minutes neither side were able to create very much opportunity. The wind and conditions combined to make it a scrappy affair with both defences putting pressure on the opposition. Then on 20 minutes, Wexford kicked to the right corner, Luke Finegan won the lineout but the clearing kick into the wind failed to find touch. Wexford got into the 22 and a penalty for hands in the ruck was converted to reduce the lead to 5 points to 3.

Then with half time approaching, Mullingar got the ball to Brabazon who timed his pass to put the flying Daire Conway away at the halfway line. He kicked ahead and managed to beat the cover to dive in for a fine individual try. Miller converted by so it was 12 points to 3 at half time. Coach Campbell was pleased with the 40 minutes as Mullingar had played into the elements and given Wexford little territory and no opportunity to score a try.

Wexford started the second half with a penalty to reduce the lead to 12 – 6 following offside at a ruck. Shortly afterwards Sean Rock gathered a kick at speed and passed to Miller who chipped ahead for Conway but the ball went to touch before he could gather.

Then with twenty minutes gone, a double tackle by Campbell and Brabazon put pressure on Wexford.  The attempted clearance was fielded by Aaron Glennon, and from the resulting ruck, Miller passed to Cathal Burke. He shimmied and passed to put Maxwell through the defence. He bounced the first cover tackler and then outpaced the chasing defenders to score a telling try. Miller got the conversion to stretch the lead to 19 -6.

Quinn gathered the undercooked kick off and made good ground galloping down the right wing. He found the supporting Jonny Moran, but the next pass didn’t find the supporting players and Wexford snuffed out the danger. Then Brabazon chased a Conway kick ahead following very good handling by the Mullingar backs, but the defender just got to the ball first. Mullingar were chasing a bonus point win. There then followed an incident where the referee red carded Aleksa Mitic and a Wexford player for off the ball engagements. This seemed to fire up the Wexford team. Reidy replaced Finegan at the next scrum.

Wexford dug deep and raised the intensity and physicality of their game. Geraghty and Quinn combined to hold up a player in the tackle and win possession back. But Wexford were not giving up. Regaining possession, despite big tackles from Reidy, Vaipula and Maxwell, Wexford applied great pressure and got to the Mullingar line. Vaipula was yellow carded for offside and Wexford managed to score in the left corner. The conversion was missed, leaving the score at 19 – 11 and Mullingar held out for the final couple of minutes to seal the win.

The Mullingar team celebrated having reached their goal of going unbeaten in the run up to Christmas, but will be conscious that there are still five games to go in this division.

Mullingar came away from Wexford on Sunday with just a losing bonus point for their efforts. A high scoring game played in dry but windy conditions in the south east. The weather on leaving Mullingar was not enticing for a day`s outing, but as we approached this corner of the country, the sky got brighter and a lot better than the weather we left behind.

Mullingar got off to a good start and despite playing up an incline took the lead after about 10 minutes through a try by Craig Swanson which was converted by Cian Cleary .

For the next 10 minutes Mullingar defended well but eventually the home side got in for a try of their own to level the score at 7—7. Not to be outdone Mullingar worked their way into the Wexford half and from a scrum about 15 metres from the Wexford line backrow Niall Derham broke off and ran in for Mullingar`s second try, again converted by Cian Cleary.

Mullingar were dominant at this stage and it looked like we got in for a 3rd try, however as the referee was uncited it was not awarded. Just before half time Wexford also got a second try, which went unconverted and left Mullingar ahead 14-12 at the break?

10 minutes into the second half Wexford got in for their 3rd try, which was converted and put them in the lead for the first time at 19-14. While Wexford were playing up the hill they used the cross wind to better effect in the second half and 20 minutes in the home side got in for their 4th try to go 26-14 up. Mullingar kept attacking and in the 25th minute Stuart Flynn back from a long injury break got in for our 3rd try to now leave the score at Wexford 26 Mullingar 19. Wexford were to extend their lead in the 33rd minute to now lead 33-19. Mullingar however didn’t give up and on the 38th minute not to be outdone by his twin Stephen Derham got Mullingar`s 4th try, which was converted by Cian Cleary.

It was a disappointing loss but with 1 away and 3 home games left there is plenty of scope to move up a few places in the table for our seconds.