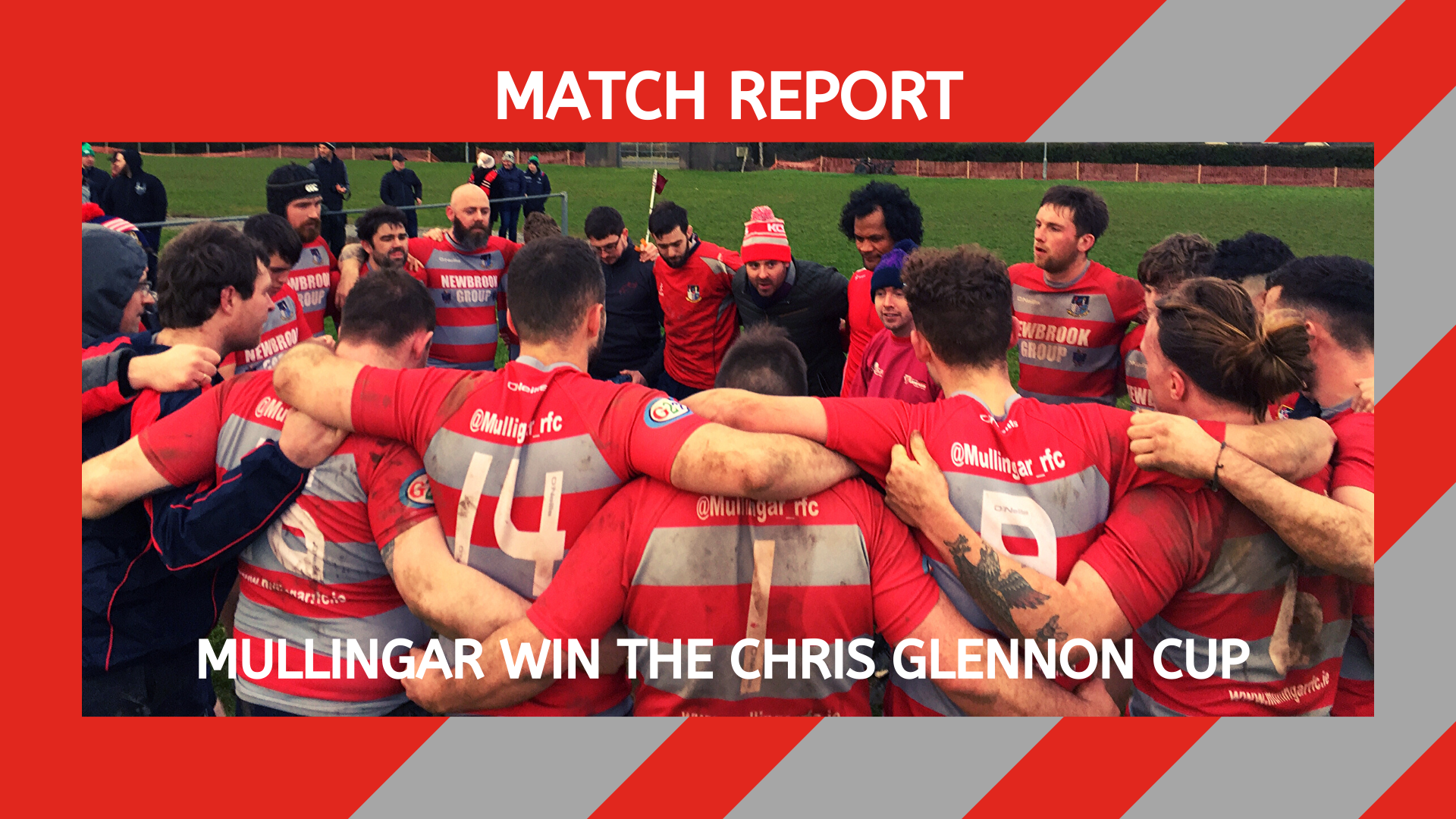 Mullingar produced some excellent running rugby to score four tries to two against Longford to win the Midland League at Roscrea on Sunday. The trophy is now known as the Chris Glennon Cup to honour the work put in by the late Tullamore clubman in developing rugby in the Midlands Area. Mullingar RFC have their name on the trophy, commendably reversing the result against Longford last September; an achievement in itself given Longford ply their trade in a higher division.

On a dry but windy day, Mullingar started with the wind advantage and used it to great effect with a barnstorming start to the match. Mullingar forced a penalty within easy range for Millar to convert and take an early three point advantage. Then, with less than 5 minutes gone, Daire Conway made a break going left to right, and put Petar Mitic away. Petar found great support on the inside from Donal McGovern, who found Paul Maxwell on the charge and Longford could not stop his try, which was duly converted by Mitchell.

A great offload from Dunne put the supporting Brady through the first line of defence. He found Geraghty who took a tackle and from the resulting quick ruck ball, the next pass did not find the intended player and the chance was lost. Longford then applied pressure and were strong in bringing forwards around the corner of rucks, but Mullingars defence was excellent with Dunne, Vaipula, Geraghty and Reidy to the fore; preventing Longford from creating any scores in the first quarter. Another penalty from long range was missed by Millar, however nearing halfway through the first half, Conway struck again. This time going right to left, he beat the first up tackle, swerved past the full back and put Sean Rock through for a fine try in the left corner. Mitchell converted so a solid 17 point lead was just reward for the Mullingar men after a very strong first quarter.

Longford then had a period of pressure, kicking a fine penalty against the wind to put their first score on the board.  However, the Mullingar response was positive. Vaipula took the ball from the base of a solid scrum, debutante Cian Cleary whipped a pass to Millar, who put a beautifully weighted chip through the advancing Longford defenders. Conway timed his run and collected on the bounce, leaving the chasing defenders behind with a well chosen path to the line for the teams third try. Millar again converted to lift the lead to 24 – 3.

Longford again responded, knowing they needed to score before halftime. They got into the Mullingar half and took a scrum from a kickable penalty. Longford had a number of phases of forwards charging at the Mullingar defence. After repeated strong running and good hands to beat strong tackling defence, their tight head prop charged over from close range for a crucial try, which was well converted to reduce the lead to 24 – 10. Mullingar did respond before halftime, forcing a clearing kick which Rock fielded, but Longford held out from the resultant attack leaving the score 24 -10 at half time.

With the wind and slope in their favour, Longford started the second half getting on the front foot. Niall Derham replaced Dunne and initially Mullingar got into the Longford 22 but did not manage to convert territory and possession. Johnny Moran replaced Chris Fox, who had put in a great shift. Longford used the wind to get into the Mullingar 22 and from a scrum just 5 yards out, their big number 8, managed to crash over with only 5 minutes gone. The conversion was missed, so Mullingar led by 9 points, but the momentum appeared to shift to the strong Longford pack for a period.

Then the crucial score. Lemeki Vaipula won a great turnover ball, Cleary sent Rock away on the right from deep in their own half and Rock chipped ahead on the right touchline around the halfway mark. Between them they managed to snaffle the ball away from the covering defender, and some lovely interplay and offloading - involving Cleary, Rock, McGovern, Conway and McGovern again - worked the ball left to put Cathal Burke over in the corner. The difficult conversion into the wind was wide, but Mullingar had regained a 14 point lead, 29 -15. This proved enough, but there was a long and hard fourth quarter to play. Both teams were made work hard for any progress. Naughton replaced the excellent Lambe and McNay replaced Vaipula to freshen up the pack. Derham and Conway combined to offload alternatively to gain ground, but Longford cleared their lines. Longford, for their part, had excellent attacking attempts but could not break down the well organised Mullingar defence. Miller made an excellent kick to find touch deep in the Longford 22, but indiscipline led to a clearing penalty for Longford. Then a rush of blood and a silly off the ball incident resulted in a red card for Conway. This was a pity given his major role in creating and scoring the match-winning tries.

Mullingar held out for the remaining two minutes and can take great pride in the result and a trophy to celebrate. In particular, the team performed very well without some first team regulars. There were really strong performances from players who have not had regular first team game time recently. Brian Reidy was excellent in place of Alexis Mitic and Chris Fox and Darragh Lambe were solid throughout. Niall Derham added great impetus on his return from injury and Cian Cleary was outstanding at scrum half and acclimatised really well with solid passing throughout on his senior debut.

Although now Midlands Area League Champions and delighted with the the win and performance Mullingar took no time following this thrilling contest to remind themselves to remain focused and keep a firm eye on the main prize and objective this season, Promotion to 1B.

Sunday 19th Jan vs Balbriggan (Away)

Sunday 16th Feb vs Coolmine (Away)