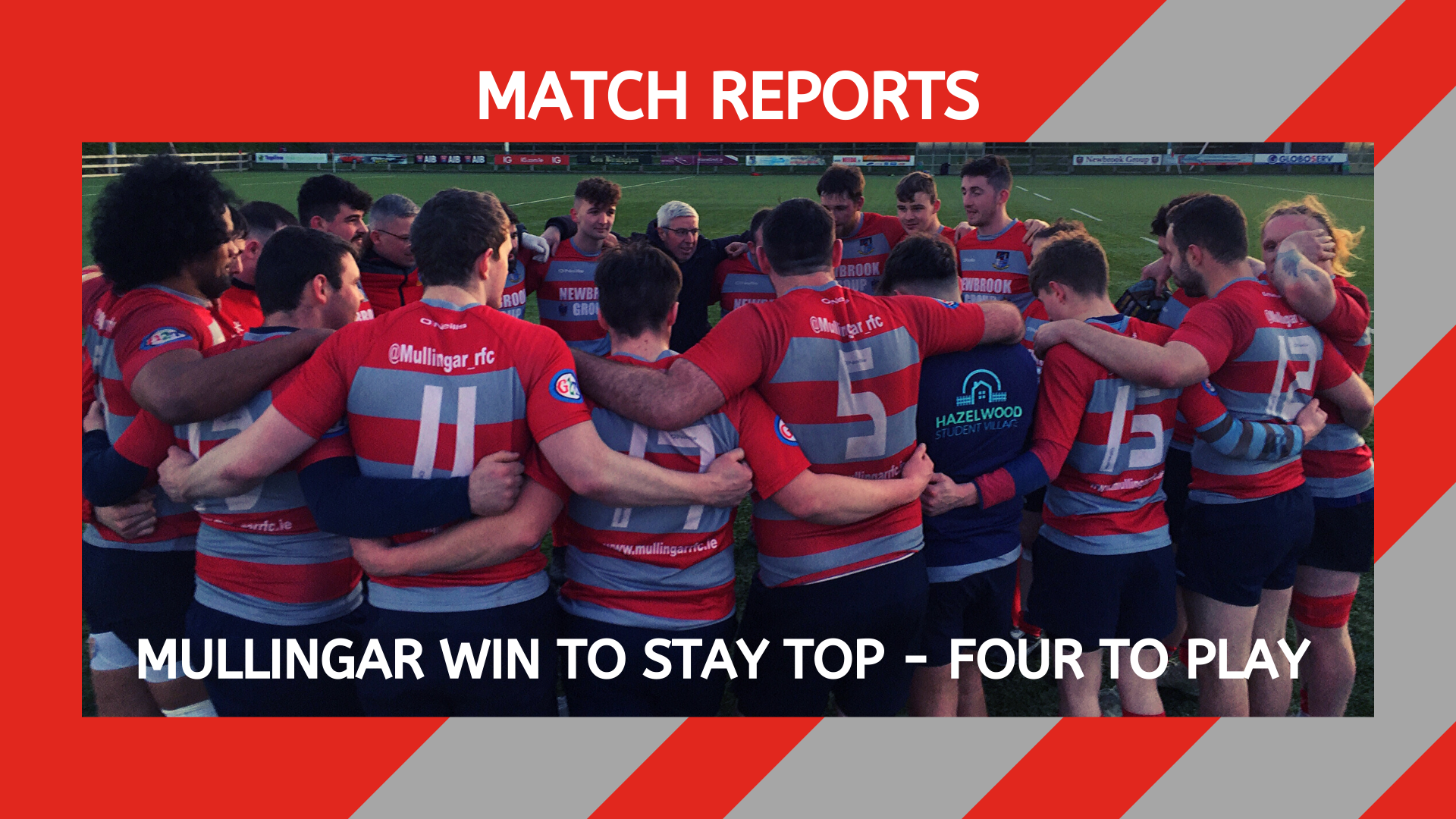 On a sunny but chilly afternoon at Shay Murtagh Park, Mullingar scored six tries to beat North Kildare with a bonus point and maintain their lead at the top of Leinster League Division 2A, reversing the result from the third league game with some authority and a bit to spare.

Mullingar started really well. Straight from the kick off, Mullingar’s aggressive defence forced a penalty in front of the posts for hands in a ruck, and Mitchell Miller converted from in front of the posts for a gifted three nil start. Then Mullingar put pressure on from the kick off. Cathal Burke threatened going right, then Darren Brady set up a ruck, and Campbell passed left to Miller who put Maxwell through. A great offload from Maxwell put Lynam clear but he needed excellent hands to hold the ball and cross the line in the left corner. A beautiful touchline conversion from Miller made it ten points up after just seven minutes for the home team.

From the kick off, North Kildare had a scrum from a Mullingar knock on, where a penalty was conceded and the North Kildare 10 reminded us of his accuracy with a solid penalty conversion; 10-3. Mullingar reacted well. Firstly, Cathal Burke stole the ball, then Aleksa Mitic chipped into the North Kildare 22, and a penalty was conceded. Miller Kicked to touch and Geraghty won the lineout for Daryl Quinn to barge around the side for a try. Although Miller missed the conversion, 15 – 3 was a solid lead after an excellent start by the home team.  A cheap enough penalty for a high tackle gave North Kildare the chance to stay in touch, which they duly took, 15 -6 after 15 minutes.

Mullingar continued to pressurise North Kildare with the pack working hard to support play. The front five were on top in the scrummage and lineouts were going well with Geraghty the main source of good possession.  Mitic was high tackled just five yards out, and Maxwell nearly got over from a quick tap penalty. North Kildare risked yellow but defended well enough to prevent a score and cleared their lines. Mullingar had good breaks from Mitchell Miller and Sean Rock, and strong runs from Maxwell, Geraghty and Moran, but North Kildare turned possession when awarded a scrum following a maul.

Then Mullingar scored the crucial try of the game just before halftime. The ball was moved to Glennon on the right wing, who tested the cover defence. Campbell moved the ball left and it was passed across the pitch to Brabazon who tested the defence again. Then Miller found Dunne on a skip pass and the Mullingar forwards coach dived in at the corner for a spectacular score…. with an equally spectacular repeat touchline conversion from Miller. The score was now 22 – 6 at halftime which was a fair reflection on the home team dominance in that half.

The second half started well for Mullingar. Miller chipped ahead and the defender was caught in possession. Burke ripped the ball in the tackle (becoming a trademark) and found Daryl Quinn on the charge. His pass nearly found support to score under the posts, but the referee decided there was a knock on. Then Lynam fielded a clearing kick on his own ten metre line and made a lot of ground. He passed to Maxwell who held on after a big collision to find the supporting Lemeki Vaipula  who crashed over under the posts for the bonus point score. Burke converted for 29 – 6.

Then Geraghty caught the kick off and made ground, chipping ahead along the left touchline. Good passing and strong support across the pitch resulted in Sean Rock just being held up over the line. From the scrum, great footwork from Miller nearly broke through. Then Campbell saw space and drew the close in cover to send Geraghty over for the team’s fifth try, converted by Burke to make it 36 -6 with 25 minutes to go.

Now North Kildare put some phases together and broke through to score under the posts from a series of attacks to make it 36 -13.  Mullingar decided fresh legs were needed and Brian Reidy came on for Mitic and Luke Finegan for Dunne. North Kildare had a yellow card after scrum half Campbell was tackled off the ball and then again on the ground. Cian Cleary came on for Campbell and Donal McGovern for Miller. The game loosened up for a short while and North Kildare managed another try from a speculative kick ahead where the bounce beat the defenders and North Kildare gathered to sprint under the posts, 36 -20. However there was no chance of a repeat of North Kildares last minute winner when the teams met earlier in the season. Chris Fox replaced Johnny Moran, who had performed really well with Brady to dominate the scrums. Mullingar  finished the stronger and Luke Finegan grabbed an intercept try at the finish which with Burke’s conversion made the final score 41 – 20.

Mullingar got off to a good start of 2020 with a well deserved win over North Kildare at Shay Murtagh Park on Sunday.  The first half was a tight affair with both teams having spells of dominance. The pitch was a bit softer than normal due to 3 youth games on the pitch on Saturday. That as a result of our youths having to play a total of 9 home games on Saturday. North Kildare were first to score in the second`s game but Mullingar were soon back on level terms after a great run by Killian McNay. Neither try was converted. Mullingar probably had the better period towards the end of the first half but their dominance wasn’t to show on the score board as a little bit of panic decisions resulted in balls being turned over. There was a further try for each side in the first half with North Kildare converting theirs, but the Mullingar try by Stephen Derhan going unconverted. The first half ended Mullingar 10 North Kildare 12.

The second half began with the home side execting more pressure and becoming more dominant in all phases. Our front row of Matt looram, Kevin Smith and Robert Burge more than held their own against a bigger opposition. The second row of Killian and Paul Murtagh more effective around the field. Mullingar`s back row were definitely the more effective, with on a couple of occasions, Alex Moran, Martin Egan and Darragh Lambe carrying the ball one after the other. Mullingar`s  backs also looked better when the ball was in hand and only for a few hasty decisions could have added a few more tries. However Mullingar`s second half dominance was reflected on the scoreboard as we scored 3 tries by Martin Egan and 2 by Shane Raleigh who converted one of his own tries. The half backs of Cian Burke and Ryan Brennan were solid in both attack and defence. The centres of Shane Raleigh and Petar Mitic worked well together and wings Craig Swanson and Ross Tormey covered a lot of ground. Full back Stephen Derham was his usual safe pair of hand in defence and attack. Louis Prati and Evan Eivers were second half substitutes and played a part in a good team performance.

Mullingar are now joint 2nd in the league with Newbridge.