MULLINGAR WIN PROMOTION TO DIV 1B OF THE LEINSTER LEAGUE 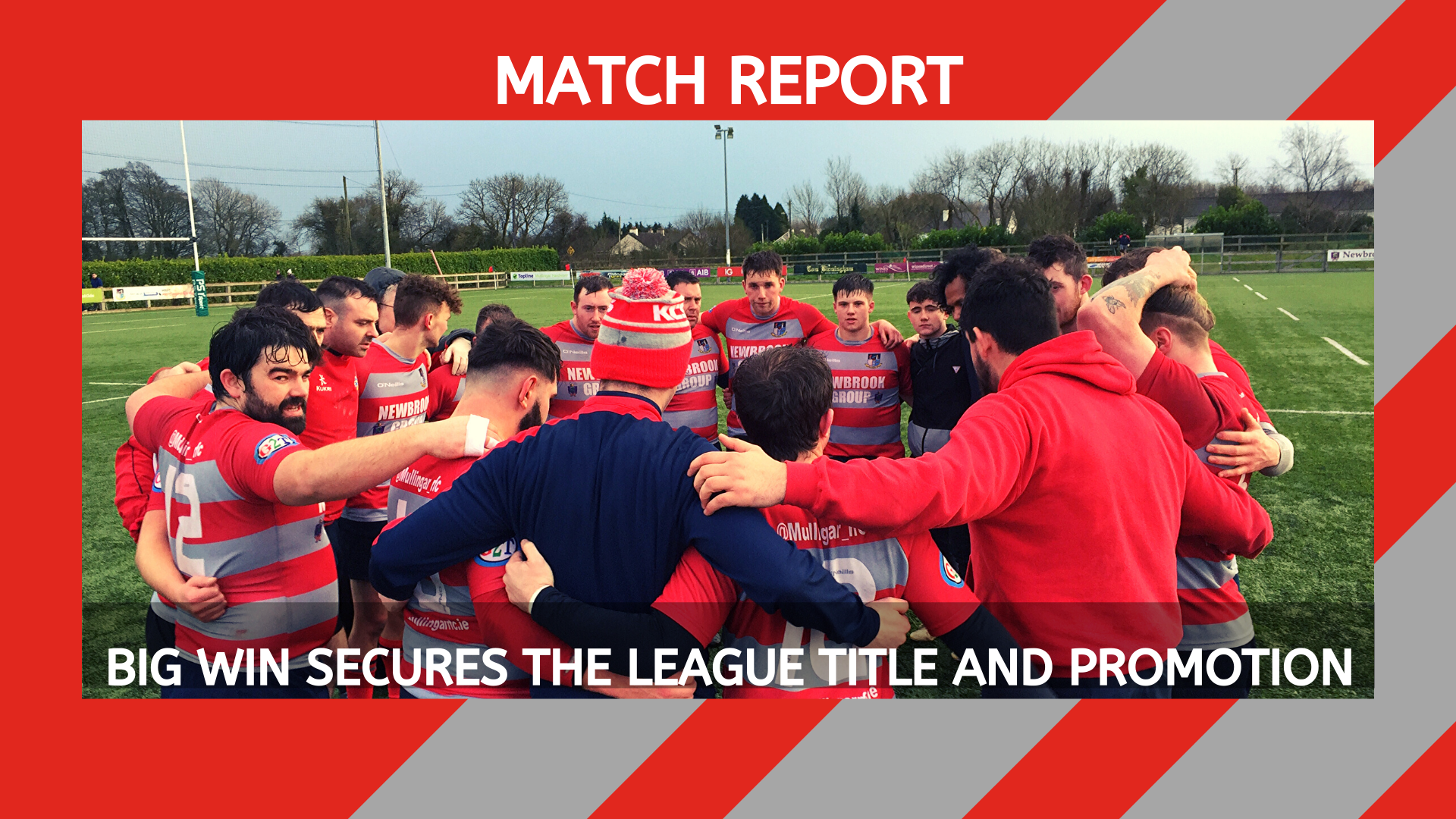 Winning can be a habit, and the game started very well for Mullingar. Playing with a favourable wind, Mullingar scored their first try within 3 minutes.  Thomas Campbell, who was playing at outhalf, found a good touch deep in Edenderrys 22. The lineout was won and Mullingar attacked with Vaipula just held short of the line. Then Campbell skip passed to Daire Conway who crossed for his and the teams first try.

Five Nil became a twelve point lead on the quarter hour mark. This time Conway created and scored, jinking past the first tackles and sprinting away to score from the ten yard line. Campbell converted. Five minutes later, Cormac Dunne scored from a ruck close to the Edenderry try line following a penalty kick to touch and a series of attacked following the successful lineout. Again Campbell converted.

There was a freshness and urgency to the Mullingar play, partly thanks to starting with last weeks bench in its entirety. Christoper Fox, Brian Reidy and Luke Finnegan in the pack and Cian Cleary and Donal McGovern in the backs all had fine games.  Mullingar nearly got their bonus point try on the half hour when Cian Cleary won the ball with speed of thought at the base of an Edenderry scrum. Alan Brabazon made the first of a number of clean breaks and put the captain on the day, Paul Maxwell, sprinting from halfway. Excellent Edenderry scramble defence forced the pass and unfortunately, the target receiver was not found.

Not to worry, the bonus point try was delivered just before haf time. It came from a Brian Reidy and Lemeki Vaipula joint tackle holding the Edenderry player up to win a scrum. Cleary kicked to touch, Finegan won the lineout on an Edenderry throw, and Conway put Glennon away. Campbell again converted, so a solid 26 nil lead at half-time.

The Eric Miller coached Edenderry team second half with resolve. Although facing relegation back to Division 2B, they raised their game. A yellow card for a high tackle on Campbell did not help their cause, but when Mullingar were looking dangerous, an intercept by their right winger led to a pitchlong chase by Conway. Conway just missed with a flying tap tackle effort, so Edenderry reduced the lead to 26 – 7. Geraghty had replaced Quinn, and now Darren Brady and Aleksa Mitic replaced Christopher Fox and Cormac Dunne, with Reidy moving to the back row.

Then Another Finegan lineout led to a strong lineout maul, and Edenderry were penalised by the excellent referee, Trevor McHugh. This tome the penalty was kicked to the corner and another good lineout maul resulted in Campbell passing to Brabazon, on to McGovern and then to Daire Conway who scored his third try, capping an outstanding performance…. 31 nil. About halfway through the second half, Campbell took a tap penalty and Cleary used the overlap to create the gap and cantered through for his try, the conversion bringing it to 37 – 7.

Petar Mitic replaced David Lynam. Then possibly the best team try of the day. A good build up from a penalty for a high tackle on Cleary, led to a lineout, another good maul, and the backs set up Brabazon to send Petar Mitic over. Again converted by Campbell, the final score was 43 -7. Word was filtering through that Coolmine were losing 19 – 15 to Balbriggan, but the game was still very much alive.

Previously the seconds XV were disappointed that their game was cancelled. Then the best news of the day. Club PRO Will Macken was carefully holding back news of an unlikely Balbriggan victory elsewhere, but did his ‘twitter thing’ and confirmed with Balbriggan, so the news was relayed to the home dressing room that the title was won. Celebrations were immense as the whole squad have really put in hard work this year. Mentioning notable absentees Mitch Miller, Cathal Burke, Eoghan Moore (all injured) and Sean Rock (ill), reference was made by Club President Tony Doolin that the work done by the wider squad including all senior players has made the difference.  So with two league games and the Provincial Towns Cup to come, Mullingar RFC are heading back to Division 1. Onwards and Upwards!

Next match is home