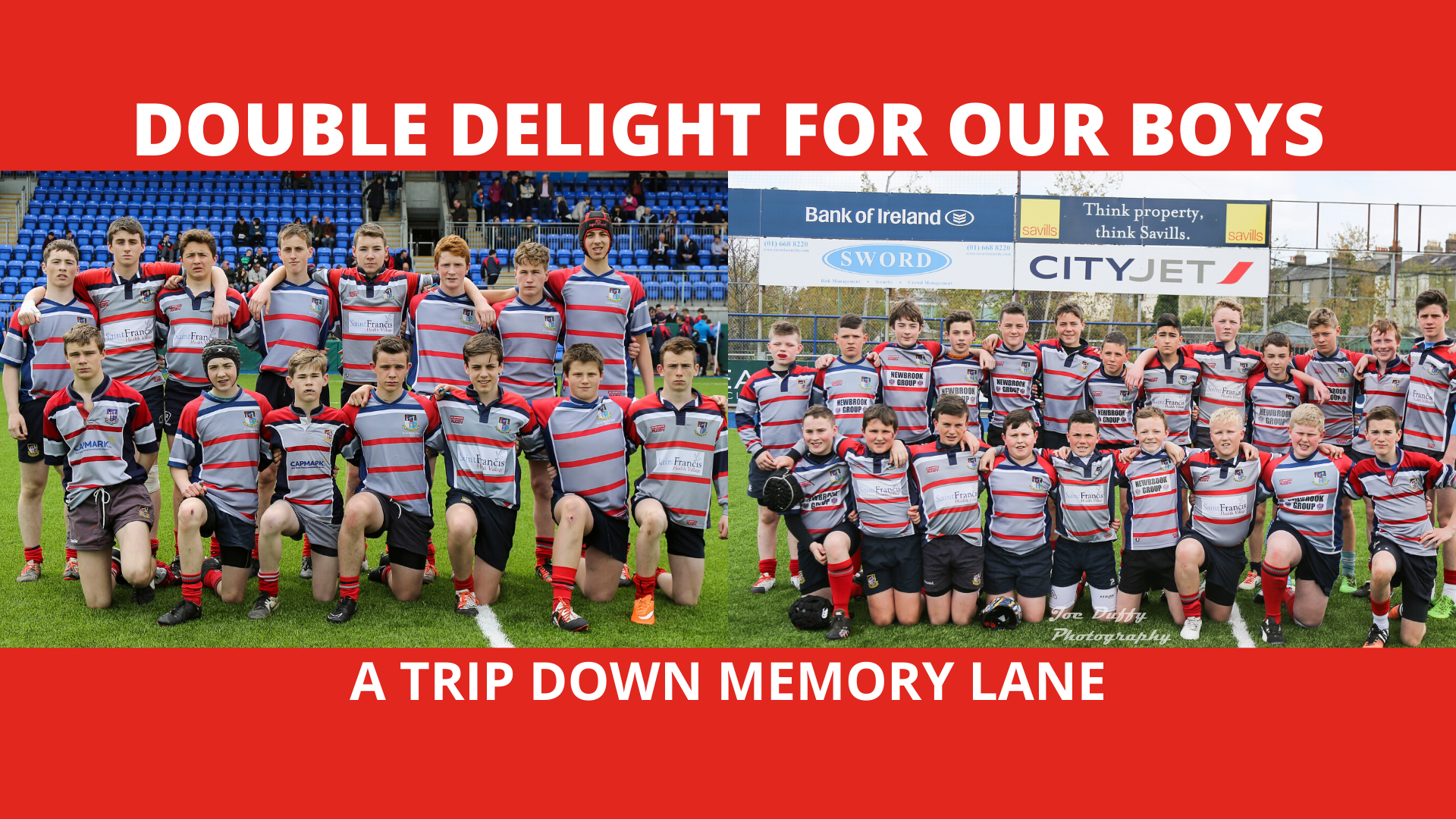 On Bank Holiday Monday, Mullingar U13s & U15s travelled to Donnybrook for Leinster Cup Finals. The U13s were first up in a Midlands derby against local rivals Tullamore and then it was the turn of the U15s versus Naas. After 2 titanic battles, Mullingar returned to Shay Murtagh Park with both the McGowan & McAuley Cups.

The early exchanges of the U13 contest were tense and both sides put in some excellent defensive work. As the half went on, Mullingar appeared to be winning the physical battle as several Tullamore players received treatment following big impacts and more of the play was inside the Tullamore half, however, the elusive first score remained out of reach. Finally, as the half moved into stoppage-time, Mullingar made the breakthrough from the back of a 5 metre scrum, as Shane Williams neatly off-loaded the ball to Ben McGauran to drive over for the first try of the game. Shane narrowly missed the conversion and the half-time whistle immediately followed with Mullingar 5-0 in front.

The second half started in a similar vein to the first with both sides putting everything into the contest but Mullingar got the first score via a 31st-minute penalty from captain Fionn O'Hara. As expected Tullamore were not prepared to go down without a fight, and worked a try in the 34th minute with a successful conversion to make it a one point game (8-7). Mullingar werenât going to let this one slip and after a dazzling control of the ball on the ground by Conor âMessiâ Gibney along the right hand touch line, he pounced to make it 13-7. Ben McGauran then showed his own kicking skills with a superb two-pointer from wide on the right to make it 15-7 with 15 minutes remaining.

Although Tullamore made some good breaks in the latter stages, Darragh Seery at full back continued to make excellent cover tackles when needed. Eventually, following 5 long minutes looking at a 50 minute clock, the final whistle blew and the celebrations began.

The U15 cup final was always going to be a close affair the teams had met twice in the league during the season with one fixture ending in a draw and Mullingar shading the other by a single score.

Naas started the game very well and kept us in our own 22 for the first ten minutes they were rewarded for the early pressure with a penalty on 5 minutes which they converted. The Mullingar lads were now playing with great commitment and energy and looked to be well up for the fight ahead, we were securing our own ball from the set pieces with ease and the back line of Paul Smith, Jenson Nagle, Harry O Reilly,

Aaron Glennon, Stephen Derham, Conan O Hara, and Adam Duggan was looking very slick. On twelve minutes Naas were rocked when Luke Carton secured our own line out ball he off loaded to scrum half Adam Duggan who set up a sweeping move involving the entire back line ending in full back Paul Smith getting  possession on the wing and powering over for a fantastic Mullingar try.

Mullingar were now turning up the heat on Naas and were well on top in this period of the game, the relentless pressure on Naas was taking its toal and the penalty count for Mullingar was mounting, continuous in discipline in the ruck by Naas resulted in a Mullingar penalty under the posts which Conan O Hara converted to leave us 8 to 3 up. The pressure continued with Mullingar unlucky on a number of occasions not to get over the Naas line James Mahedy, Niall Derham, Brian Reidy and Luca Mulcahy were relentless in their tackling this pressure resulted in another penalty which Conan Converted with ease to leave us 11 to 3 up at the break.

Naas obviously sorted some things out at the interval and threw everything at us after the break, numerous line outs and scrums early in the second half resulted in us conceding a converted try to leave us precariously 11 to 10 up, but the Mullingar lads were not going to leave this one behind and went on the front foot again Dylan Murphy, Joe Cronin and Conor Lynam were playing very well and leading by example the defensive work from the entire Mullingar team was just fantastic, Speed merchants Jenson Nagle and Paul Smith were having the game of their lives, after relentless pressure on the Naas line from Niall Derham, Luke Carton and Conor Lynam Naas gave away another penalty resulting in a yellow card for a Naas player. Matthew Doyle collected a loose ball and went on a good Mullingar break before the most memorable moment in the match came in the dying moments, a good move from Naas ended with the big Naas number 8 bearing down on our line with no one in his way except our winger Stephen Derham but Stephen was not found wanting he got down very low and took him out in a flash with a match saving tackle. After an extremely tense second half the relief of the final whistle came and the celebrations began after what was a fantastic game of rugby. Captain Niall Derham gratefully accepted the Mc Auley cup on behalf of a fantastic Mullingar team, well done to all the lads and head coach Johnny Butler who was seen grinning all the way back to Mullingar.