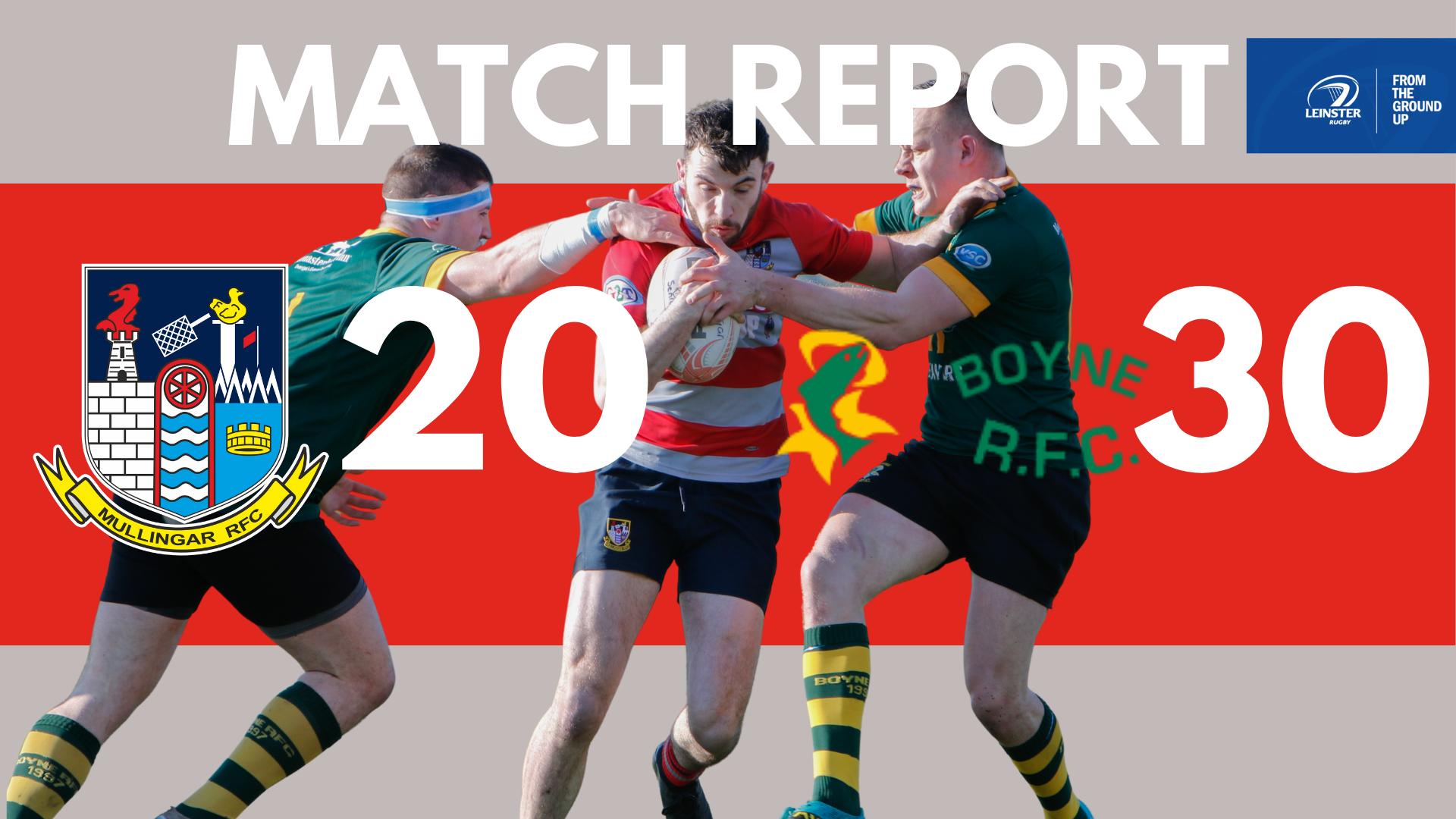 On a very wet and windy Sunday afternoon, Mullingar began life in Division 1B after an absence of three years with a two try to three loss to Boyne RFC. Having beaten Boyne in the Towns Cup last April, the opposition were fired up for this one and never allowed Mullingar to build any significant momentum, despite good performances from many of the home team.

Mullingar kicked off with the considerable elements in their favour, and Stu Flynns kick off was promptly knocked on to give the home side good territorial position and an opening scrum. Good phased play from that opening scrum led to a number of attempts to cross the line from Maxwell, Mitic and Vaipula, but Boyne defended very well and forced a knock on at the base of a ruck to eventually clear their lines with no concession.   Mullingar continued to attack, with a chip just slightly too far, and Boyne kept the home side scoreless after ten minutes of home pressure.

Then with 12 minutes gone, Boyne kicked ahead and Mullingar covered well but were penalised for moving forward on the ground. Boyne kicked for touch, won a couple of lineouts and then set up phased play along the home 22. Strong running from the Boyne backrow combined to get behind the defence with offloads leading to a try under the posts, converted to put the visitors 7 nil ahead and 15 minutes gone, this was a big statement given they were playing into the elements.

The next ten minutes consisted of both teams testing each other out without much progress either way. Boyne looked happy enough to slow the game down and there were a lot of breaks in play. Captain Darren Brady made an excellent turnover penalty and Mullingar got into the Boyne 22. Twice chip aheads nearly resulted in try scoring opportunities, but Boyne were dogged in defence. Then Stuart Flynn kicked two out of three penalties in a five minute spell, for offside, a scrum penalty and a high tackle, to narrow the visitors lead to a single point; 6 -7 at 35 minutes.

Mullingar really needed to gain the lead before half time.  A low raking kick up the sideline was chased down by Eoghan Moore but unfortunately, the ball was deemed to be knocked on. Boyne were pressurised in their own 22, and a penalty was kicked to the corner. An excellent take from Luke Finnegan led to a maul which Boyne brought down for another penalty. This time the Mullingar pack controlled the driving maul really well and Cormac Dunne scored. The conversion from Stu Flynn left the home team ahead by 13 – 7 at half time.

The second half did not start well for the home team. Firstly Mullingar returned the favour and did not field the kick off cleanly, conceding possession immediately to Boyne. Then Cormac Dunne was yellow carded in preventing a try under the posts, and Boyne took the points to narrow the gap to 13-10. With seven men in the scrum, Boyne targeted scrum-time and forced another penalty after 5 minutes which was converted to leave the score tied at 13 apiece. Johnny Moran came in for Ben Glennon. Then Conor Glennon replaced  Cormac Dunne when the sin bin was over.

Boyne continued to press, but the ball went loose around the home ten meter line and Alecsa Mitic came away with support from the impressive Donal Liddy and Eoghan Moore. Mitic timed his pass really well, Liddy used his strength to fend the first defender and put Moore in space on the opposition ten meter line. Moore galloped away and scored under the posts for the first bit of running rugby either side had served up. A lead of 20 – 13 for the home team with 25 minutes to go.

Then on 65 minutes, Boyne initially lost a lineout with another Luke Finnegan take against the throw, but Mullingar somehow conspired to lose possession and Boyne built phases. As with their first try, it was predominantly the big strong running backrow who combined to get behind the defence and support each other to score under the posts. The match was tied 20 apiece, ten minutes left and the momentum was back with the Boyne men.  Adam Treanor replaced Arthur Brabazon (who had an excellent game). Then Boyne kicked ahead and although Mullingar defended well, there was a knock on and Boyne had a scrum in a great attacking position. Boyne then built the phases until Brady created another penalty turnover and Mullingar cleared their line.  Back came Boyne and this time they were held up short in the left corner, but managed to snipe a try on the blind side of the ruck. A magnificent conversion gave the visitors a late 27 – 20 lead. To add to the home team troubles, a penalty was conceded which the referee awarded on the halfway line. Whereas the attempted kick was missed, Boyne were awarded a penalty for a high tackle after the drop out and this was converted to leave the score 30 points to 20 with a mere five minutes to go.

In fairness to the home team, they rallied and tried valiantly to create a score. They opted to run a penalty and it took all of Boyne’s considerable defensive strength to avoid conceding a closing score which would yield a bonus point. Boyne held out.

So Mullingar have started the league campaign with a loss, but were competitive throughout. The conditions were difficult, but Mullingar will now need to regroup and improve on the areas where Boyne managed to get on top. Mullingar should take credit for a good lineout, good protection of the ball for most of the game and good individual performances throughout.

Mullingar flattered to deceive with a good start to this seconds league game. For the first time in many years, the club fielded a strong team of players who are training hard as part of the senior squad, and with seven subs on the bench to boot. The side were captained on the day by Niall Hannon, and it is great to have such a talented player back in the colours. All positive.

The team started with the elements in their favour, i.e. strong wind and rain. After ten minutes, Ed Nally crashed over after a number of attacking phases, notably from Paddy Doran. Unfortunately, things went the other way for most of the remaining game. The packs were roughly equal, and possession was pretty much evenly shared. The Mullingar halfbacks of Cian Cleary and James Kerrigan held their own and showed good control throughout. However the outside backs did not have a great first half defensively. On 20 minutes, the Boyne 13 returned an attacking kick to glide through the defence without being challenged. Then five minutes later, the Boyne 15 broke through from scrum possession, neither being converted so it was 10 -5 to the visitors. Then on the half hour mark, the same player made it 15-5.

Mullingar finished the half with a series of attacks from penalty lineouts and charges close in.  Twice, Mullingar got over the line. But firstly Alan Naughton and then Ed Nally were deemed to be held up and Boyne kept Mullingar out.

The second half was difficult for the home team. A loosely defended ruck left a gap for Boyne to get through the cover and the conversion made it 22-5 shortly after the restart. The game was over as a contest. Boyne used the wind well and dominated territorially as they continued to rack up a score. It ended 44 – 5 as Boyne added 4 more tries and a conversion. Better things will come for the Mullingar seconds this season.