A WIN'S A WIN, AND WE ARE UP AND RUNNING IN LEINSTER 1B 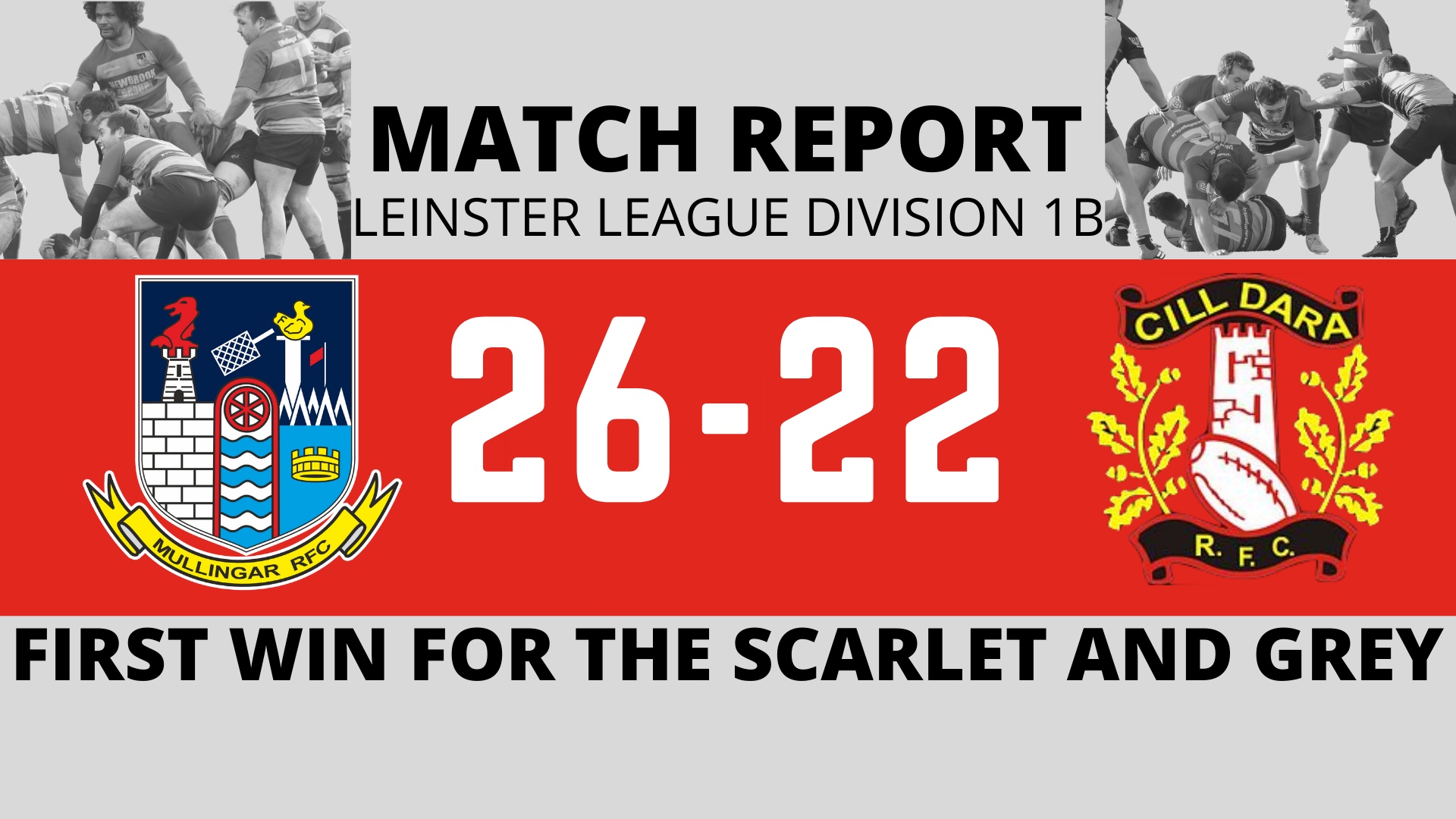 Before the start of Sunday`s game, there was a minutes silence as a mark of respect for our former player, Honorary Secretary, Michael (Mick) Dunne, a man who game a great number of years service to the Club. Our condolences go to his wife Marjorie and children, Fiona, Michael Jnr. and Alison.

On Saturday Cill Dara conceded the 2nds game to Mullingar thus keeping Mullingar at the top of the 2nds league. The concession was a disappointment to the home side as they were looking forward to the match, being in good form of late.

The first team got off to a great start and had 3 point on the board in the 2nd minute from a penalty. A Cill Dara lineout in their own 22 was won by Mullingar and under pressure Cill Dara game away a penalty duly kicked by Ronan Wallace. Although most of the play in the next 20 minutes was in the Cill Dara half, Mullingar failed to add to the score line as a number of chances went astray, due to taking the wrong option on a couple of occasions and players being isolated. In the 25th minute Darach Geraghty broke through the Cill Dara defence to score Mullingar`s first try, which was converted by Ronan Wallace to put the home side 10-0 up. 10 minutes later we had our 2nd try after another quick penalty in the Cill Dara 22. Paul Maxwell carried strongly and when he was tackled, Arthur Brabazon picked up and waltzed in to put the score at 15-0. Mullingar were looking very strong at this point as virtually all of the play had been in the Cill Dara half of the pitch. However a bit of slackness allowed Cill Dara a kickable penalty to reduce the score to 15-3.

Mullingar however were to get the final score of the half just before the half time whistle, with their 3rd try, this time after some neat work by the backs, putting Daire Conway into a bit of space and he duly ran in a fine try. With the score now at 20-3 the home side were looking good for a win.

The second half started well for Cill Dara with a try in the 2nd minute. Although it went unconverted, it seems to have put the home side on edge and gave confidence to the away side. While in the first half Cill Dara were conceding needless penalties, now it was Mullingar`s turn, whenever we got into their half a penalty seemed to relieve the pressure on Cill Dara. There were a few moments of skill from Mullingar, which always seemed to be followed by a simple error or was it just nerves as Cill Dara kept attacking and found holes in the Mullingar defence. A further converted try from Cill Dara brought the score to 20-15 and the home fans were growing nervous. Cill Dara were to score again in the 70th minute, this time the try was converted to now go ahead for the first time at 20-22. A Mullingar attack in the Cill Dara half resulted in an intercept by Cill Dara and as their player raced ahead with nobody in front of him, Sean Rock chased back and with the Cill Dara player over the try line, Sean managed to tackle him over the dead ball line and prevent an almost certain try. A few minutes later Mullingar got a penalty about 10m inside the Cill Dara half and this time opted to kick for points and duly got back in front courtesy of Stuart Flynn. Cill Dara had another chance to go back into the lead but this time their penalty went wide of the posts. Stuart Flynn opted to drop kick a long ball, which Daire Conway chased hard and Mullingar were awarded with another penalty from neat where Stuart kicked the last one. Again this went over and with Mullingar now 26-22 ahead, the fans breathed a bit easier knowing now Cill Dara needed a try to win and with just a few minutes remaining, the home side held their nerve. Next up Mullingar are away to Clondalkin next Sunday with a 2.30 kick off. As Clondalkin don’t have a team in the 2nd league, there is no fixture as yet for Mullingar`s 2nd team.