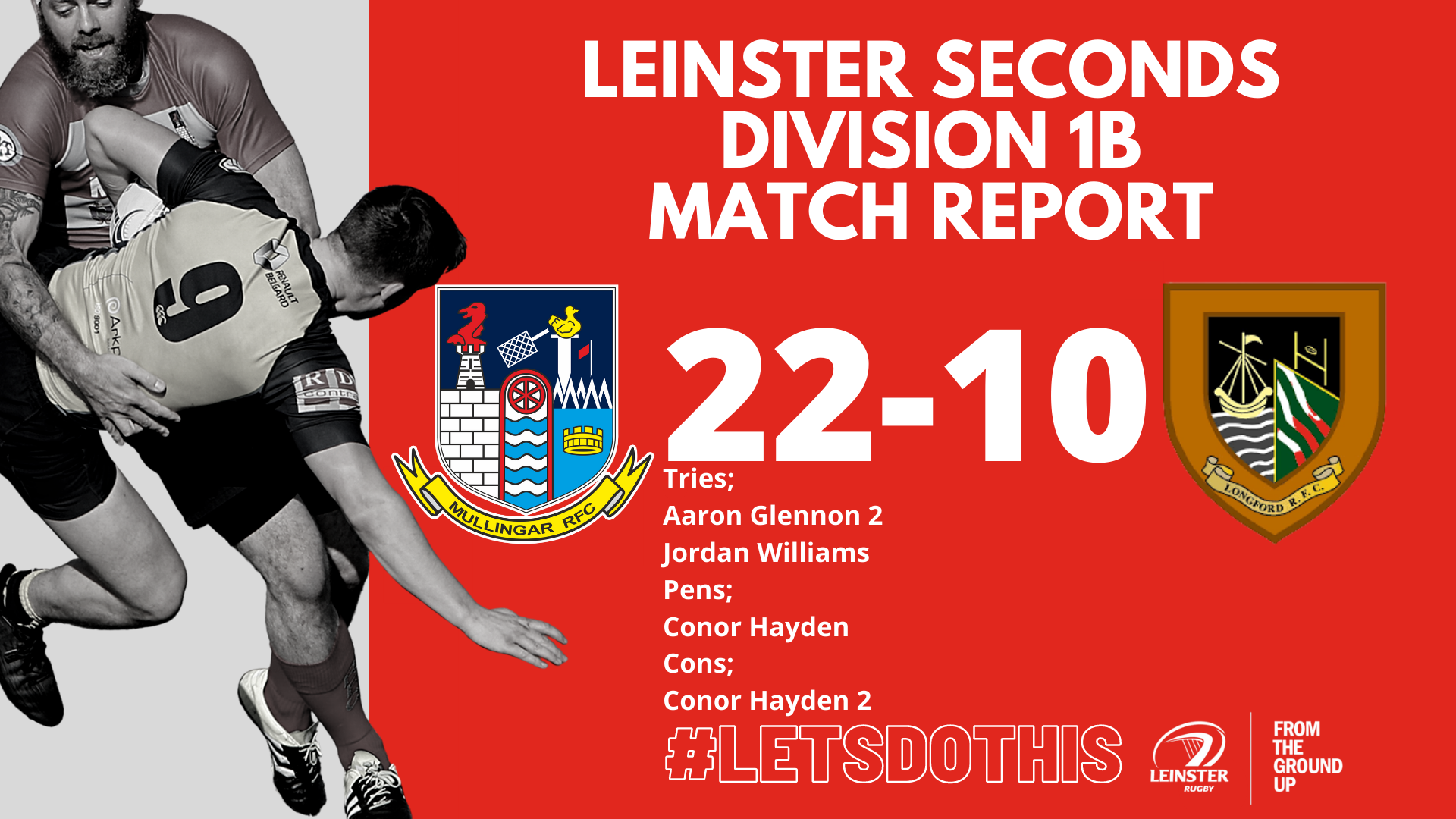 Mullingar continued their good run with a hard fought win against local rivals Longford yesterday in cool good conditions. The game started well for Mullingar with a penalty after 3 minutes converted by Conor Hayden, for a 3-0 lead. The game was mostly played in the Longford half with Mullingar forwards dominating, however it took until the 20th minute for the next score to be registered. It came after a good line out win and a driving maul, followed by some good back play, ending with Jordan Williams scoring in the corner. Conor Hayden kicked a good conversion from the sideline. The backs with Ross Tormey at scrum half and James Kerrigan at out-half were showing some potential, with the experience of Donal McGovern in the centre who was always hard to stop. Lee Ryan and Jordan Williams on the wing, didn't see much ball but were solid in defence. There was some good ball retention and driving by the forwards in the first half particularly Conor Glennon, Killian McNay, Darragh Lambe and Alan Naughton.

The front row of Ed Nally, Matt Doyle and Conal Fagan were dominant in the scrum and putting in some good tackles in open play. Sean Cronin led the way putting in big tackles as he has been doing all season, No further score came in the first half with Mullingar going to the break at 10-0

The second half got off with Longford scoring an unconverted try in the corner after just 3 minutes, to bring them back to within 5 points. However Mullingar quickly increased their lead, in the 10th minute. Longford were defending in their 22, when Aaron Glennon was sharp enough to get an intercept and score Mullingar's second try which was converted by Conor Hayden to now lead 17-5. Mullingar introduced Daryl Quinn for his first outing of the season after an injury. 20 minutes into the second half Longford got a 2nd try, again unconverted to bring them back to 17-10. However Aaron Glennon again got on the score sheet to restore Mullingar's advantage. Mullingar were attacking just outside the Longford 22, when Aaron sold a dummy to the Longford centre and went in under the posts for an easy conversion by Conor Hayden. There were no further scores and the game finished at 24-10.

It was good to see the numbers on the 2nds bench and now we have real competition for places in the first and seconds teams. At the halfway stage Mullingar are 3 points behind Carlow who are top of the league and the away game to Carlow on Dec 12th will be vital to the outcome of the league as indeed will next Sundays home game to Tullow.