BIG DERBY WIN GETS OUR SEASON BACK ON TRACK 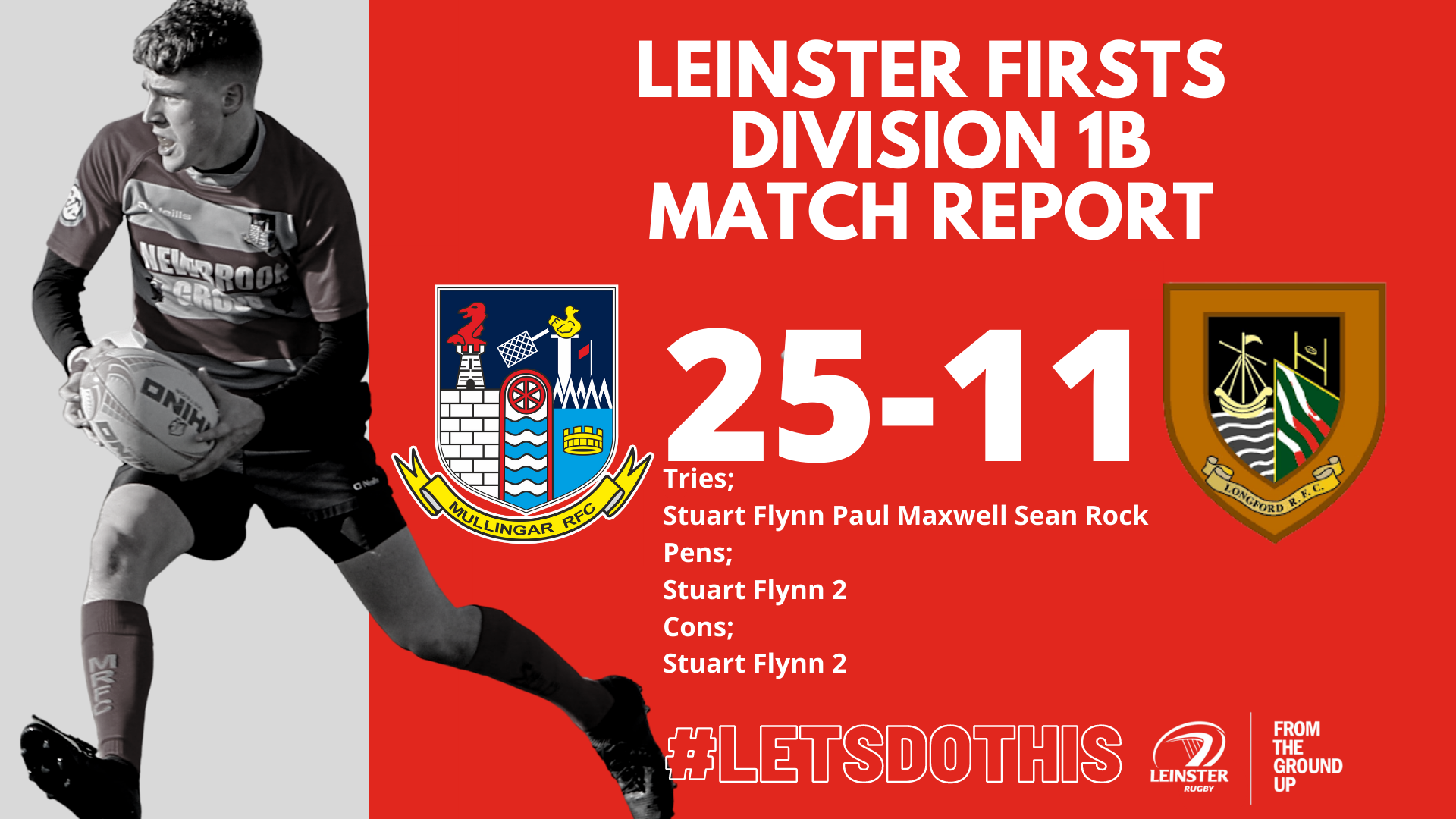 A local derby always brings about an added bit of spice when meeting in the Leinster league. On Sunday after the 2nds team had won their game the 1st team were determined to follow suit and they did so in style. The first 30 minutes of the game, were very hard fought with the defence of both sides not been breeched and most of the play was between the two 22m lines. The only real break in any of the defences came via a break from Daire Conway when he breached the Longford defence on the right side, with the longford fullback the last line of their defence, Daire opted for a kick over the full back and fortunately for Longford he got a hand to the ball to avert the danger. Longford were first to score with a penalty in the 32nd minute. However straight from the drop off Mullingar forced Longford to concede a penalty which was duly converted by Stuart Flynn. About another 5 minutes of good defence from both sides before

Longford went ahead again with another penalty in the 38th minute. In a repeat of when Longford scored their 1st penalty, almost straight away from the drop off Mullingar were back on level terms from another penalty to go into the half time break at 6-6.

Now playing with a slight breeze behind them Mullingar were begining to up their game and carring hard into the Longford half. The first try of the game came in the 45th minute, with Mullingar attacking down the right side, the ball was moved accross the line to the left, when Stuart Flynn sold a dummy in the centre and went in for Mullingar first try. Stuart ably converted to give the home side the lead for the first time. Mullingar didn`t sit back on this occasion and 5 minutes later we had our 2nd try, with Paul Maxwell getting through the Longford defence after one of his storming runs. Stuart again converted and now Mullingar had a 14 point lead at 20-6. Longford upped their game now and Mullingar were forced into more defending. A few too many penalties conceeded by the home side and the referee gave a warning regarding a yellow card. Unfortunately Daire Conway was the Mullingar player the referee picked out for the yellow and he went for a rest in the 65th minute. Daire was followed into the sin bin 5 minutes later by Stuart Flynn after concession of another penalty. Mullingar were now looking at 5 minutes with 2 player less than Longford. In the period Longford scored an unconverted try to bring the score to 20-11. Despite the 2 players less Mullingar continued to attack and 2 minutes later Mullingar were awarded a penalty just outside the 22 and to the left. With our normal kicker in the sin bin, Sean Rock stepped up, but the ball went narrowly wide. With Daire now back on, Mullingar had conceded just 5 with 2 players less and with a bit of luck that would have been only 2 points. This was down to the determined defence by Mullingar. The numbers were evened up when a Longford player was the recipient of the referees next flash of yellow. In the 71st minute Sean Rock got in for Mullingar`s 3rd try, this time the conversion was missed, but Mullingar were now 25-11 up and into the last 10 minutes. Mullingar kept up the attack but could not manage to get a 4th try, mainly due to the strong Longfor defence.

Despite the 3 yellow card, which were all for technical offences, this was a very competitive and good game, played hard but fairly. It was great to see Mullingar playing to their full potential, unlike their previous outing, This was a great team effort from no 1 Daz Brady to no 20 sub and coach TC and everyone played their part. It was also good to see Alex Moran and Henry Reilly making returns to the first team. With a number of clubs having problems fielding 2nds teams, it is great to see such competition in Mullingar for places on both first and seconds teams. If we can keep this form up, their is no doubt but we will move up the table.

Next up we have Tullow at home this Sunday with the kick off for the first at 2.00 and the 2nds team kicking off against Tullow at 12.30