MULLINGAR TAKE THE SPOILS IN A THRILLING ENCOUNTER AT THE PARK 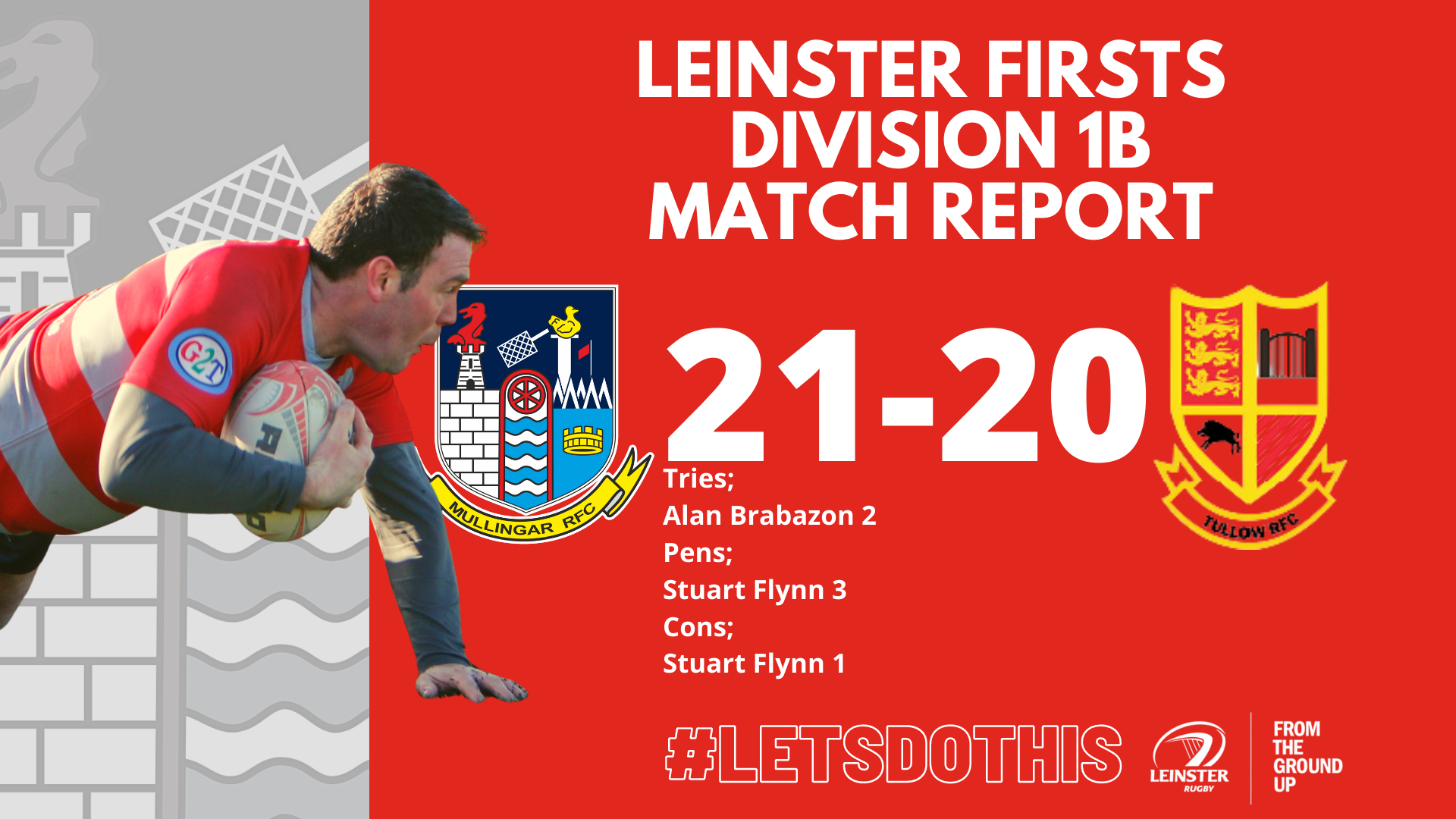 Mullingar edged a very tight game at Shay Murtagh Park to go above Tullow in the league. The weather conditions were dry but cool at ab 5c, but no breeze effecting the game. This was a very tight game from the start with Tullow scoring first and the lead changing hands 5 more times before the home side managed to hold the lead at the final whistle. It was always going to be a tight game in the forwards and the first 15 minutes Mullingar dominated possession and territory, however some of the passes didn`t go to hand and a few chances went missing. Tullow were first to score in the 15th minute, when after a penalty kicked to the Mullingar 22, Tullow won the lineout and a break by their out half led to a try against the run of play. The try was converted to give them a 7-0 lead. Mullingar renewed their efforts and went on the attack again and our backline were looking dangerous whenever they got the ball. However that was mostly in broken play as probably there were a few occasions when it might have been better to use the backline rather than taking the ball into contact, which suited the Tullow pack. However Mullingar did manage to level the scores in the 25th minute, when after good work up the right wing, with good ground gained by Daire Conway, Sean Rock, Dacach Geraghty, and Paul Maxwell, Alan Brabazon got in for the try converted by Stuart Flynn to level the scores at 7-7

Four minutes later Tullow took the lead again with a penalty in the 29th minute, 7-10. The lead changed again 5 minutes later when Alan Brabazon got his 2nd try, the score now 12-10. The conversion was charged down by Tullow. Mullingar were unfortunate not to score again, when awarded a penalty near the halfway line. With the referee playing advantage Stuart Flynn kicked a little grubber behind the Tullow backs, Sean Rock raced on to collect the ball, however the referee had just blown his whistle as he had not seen Sean and the opportunity was lost. There were no further scores before half time. Unfortunately our Captain Daz Brady went off injured in the middle of the first half to be replaced by Ben Glennon.

The second half got off to a good start for the home side with Stuart Flynn kicking a penalty in the 2nd minute to go 15-10 up. The lead lasted just 6 minutes before Tullow were fortunate to score a try following a lineout in the Mullingar 22. Fortunate in that while their scrum half clearly knocked the ball on, the referee was unsighted and a couple of rucks later Tullow got in for a converted try to go back in the lead at 15-17. Mullingar`s defence was good in the following 10 minutes when they repulsed a couple of Tullow attacks in their own 22. One ball been turned over and Stuart Flynn kicked clear, the ball just clearing our 22, but a fantastic high catch by Sean Rock brought play into the Tullow half and Mullingar retaking the lead in the 57th minute. Stuart Flynn again on the mark and Mullingar were now 18-17 ahead. The game flowed with both side defences been hard to breach and ground gained was done only with hard drives and many knocks. Both physios been kept busy throughout the game. Another 10 minutes and another change of lead with Tullow kicking a penalty, going ahead at 18-20 and Mullingar getting a yellow card for one too many infringements. With 10 out of the remaining 13 minutes to play with 1 player less, Mullingar increased their efforts and kept Tullow scoreless. Mullingar increased their efforts and were rewarded in the 78th minute with Tullow conceding a penalty and again Stuart Flynn was as reliable as ever and the final score of the game put the home side ahead at 21-20. A lot of relief in the ranks of the home player and supporters to edge out this tight game and move above Tullow in the league if only by a single point.

As the scoring suggests this was a very tight game, Mullingar again lost a few lineouts, went backwards in the scrums on a couple of occasions, knocked on a few balls, made a few wrong choices but more than made up for those little errors with a lot of effort and heart all over the field. One more game next week, away to Carlow before the Christmas break and we will need the skill and determination shown in the last to weeks in order to get a result.

Tullow conceded to Mullingar in the 2nds game and next up for the 2nds squad is away to Carlow next Sunday. With Carlow 3 points ahead of Mullingar at the top of the table, it would be vital to win next Sunday if Mullingar are to harbour designs of winning the 2nds league.

Next weekend we have Carlow away on Sunday with the kick off for the first team at 14.00 and the 2nds team kicking off against Carlow at 12.30

Senior Women play Gorey away  in Clonattin Kick Off 13.00.