MULLINGAR RISE TO THE OCCASION AND 5th IN THE TABLE 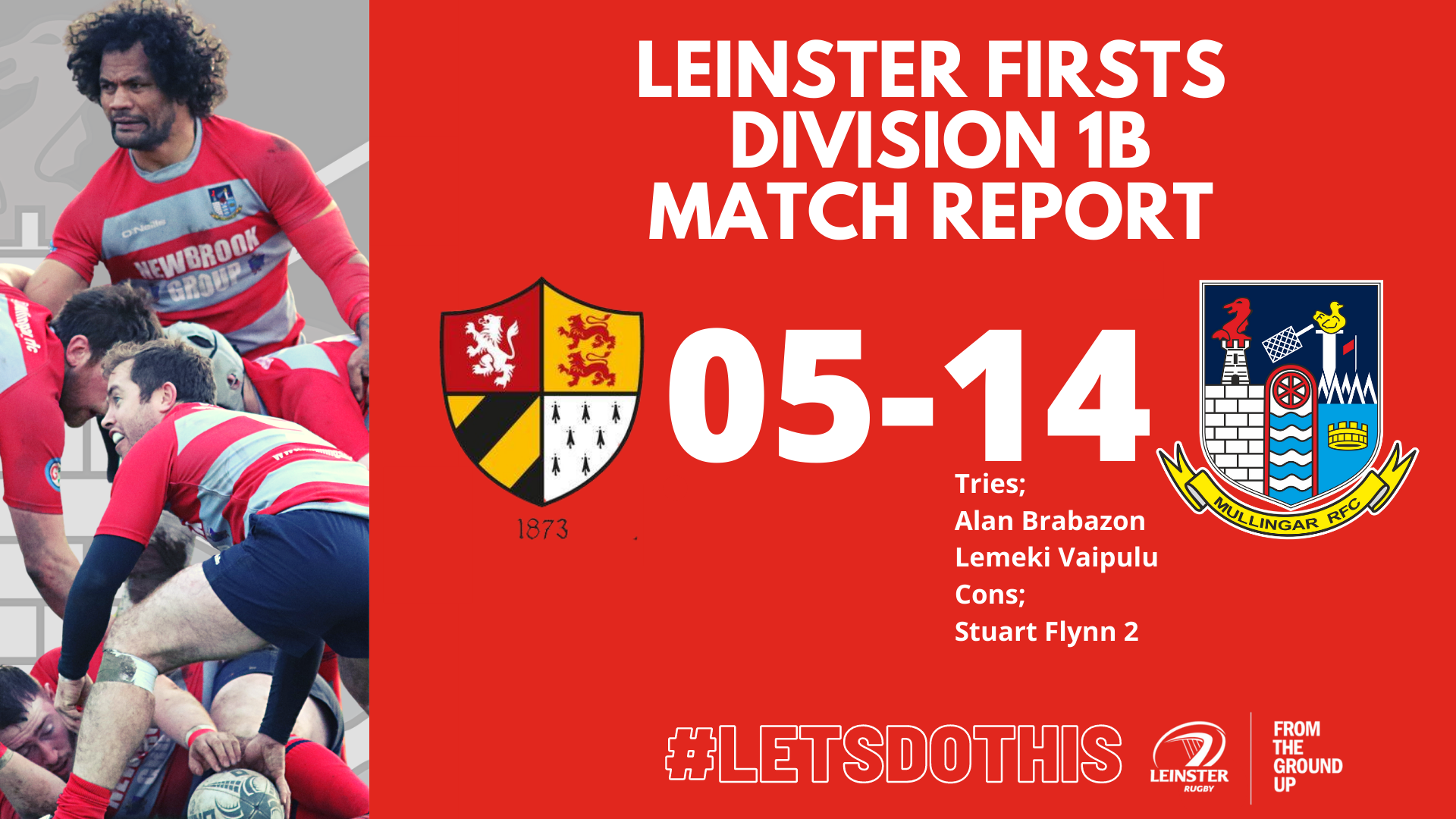 Mullingar went to Carlow on the back of 2 home wins and having moved 2 places up the league. Well from where we were, we couldn`t go backwards. Those 2 wins has grown the confidence and belief and so right from the kick off today, Mullingar went on the attack and within 2 minutes had won a penalty just outside the Carlow 22 and to the left, Unfortunately the ball came back off the post. However Mullingar did not let Carlow out of their half and after a half break by Anthony McGivney, Ben Glennon carried on from the ruck, the ball went to Alan Brabazon, who broke through the Carlow tackles to score his 3rd try in 2 games. Stuart Flynn converted to put Mullingar 7-0 ahead after 6 minutes. From the Carlow kick off Anthony McGivney caught and ran back at Carlow and forced them to concede a penalty. In the next few minutes as Mullingar stayed in the Carlow 22 and Carlow conceded a few more penalties, which resulted in the referee issuing a yellow card for repeated infringements in the 10th minute. Mullingar`s pressure told when Lemekie when over for our second try in the 13th minute. The try was a just reward for Mullingar keeping possession and moving the ball through the forwards making hard runs allied with good back play. The try was converted by Stuart to put the Mullingar 14-0 up. For the next 10 minutes the game was played mostly in the Carlow half, with the Mullingar forwards keeping their counterparts busy in defence. Our front row of Ben Glennon, Henry Reilly, and Johnny Moran were dominant in all of the plays. In the first 25 minutes Carlow had been in the Mullingar half on only 2 or 3 brief occasions, such was the dominance of the Mullingar players. In the last 10 minutes of the first half Carlow did get more of the ball and upped their game and did make incursions into the Mullingar half and after winning a number of penalties, 2 of which looked kickable but they opted to go for the 5 pointers, with kicks for lineouts.

Carlow did win their lineouts and went for mauls. However on each occasions Mullingar`s defence kept them out. With TC marshalling the defence our outhalf Stuart, was ably assisted by a resolute pair of centres in Alan Brabazon and Anto McGivney. Wingers Eoghan Moore and Aaron Glennon, allied with Daire Conway at full back were solid in defence as well as a real danger when they had ball in hand. It was in defence of one the mauls that Stuart Flynn injured his ankle and had to go off. With Donal McGovern coming on at centre, Anto moved to the wing and Aaron Glennon from wing to scrum half and TC moving to outhalf. However with such a change in our backs, there was no change in our strong defence and while Carlow spent most of that 10 minutes in the Mullingar 22, try as they could they could not breach our defence. In the 38th minute Carlow looked like they finally might get in for a try however strong Mullingar defence once more denied them as we managed to hold them up over the line.

Carlow kick off for the 2nd half and Mullingar`s Alan Brabazon broke out of our 22, passing to Daire Conway who continued up field before kicking into the Carlow 22. Daire and Eoghan first to tackle the Carlow player who fielded the ball. Mullingar had started the 2nd half as they had done the first and it was apparent that Carlow were not going to get anything easy today. Time and time again Darrach Geraghty, Lemeki Vaipulu, Paul Maxwell, Niall Hannon and the young kid Paddy Doran, denied Carlow attacks and turned the ball over. Indeed Paddy Doran belied his tender age with a lot of good carries and tackles and is growing into a key member of the squad. Such was the pressure on the Carlow game that they were making uncharacteristic mistakes. One such being a Carlow penalty on the halfway line, taking a quick pick, Carlow kicked the ball dead, with the result of a scrum to Mullingar back on the half way line, and another Mullingar incursion into the Carlow 22. A feature of the 2nd half was a number of good kicks to touch from TC at the base of our rucks. Daire Conway and Anto McGivney were always dangerous when they got the ball and Alan Brabazon seemed to attract 2 Carlow defenders such was his threat. In the middle of the second half Chris Fox replaced Johnny Moran and Alex Moran replaced Lemeki Vaipulu. Carlow continued to go for lineout and mauls whenever they got a penalty and Mullingar continued to defend the successfully. The first half had 9 minutes of injury time and the second half 8 minutes of injury time. In the last minute of the game Carlow managed to hack the ball from their own half into the Mullingar 22 and in the last play of the game managed to get a try in the corner. The conversion was missed and the final whistle was blown.

So with the 3rd win in a row, Mullingar have moved from 8th to 5th in the league table and hopefully with the form now showing will consolidate their position when the league resumes in January.

The first match of the new year will be away to the league leaders Wicklow. A daunting task but not beyond this squad. Today was really a great team effort as everyone contributed to achieve the result. Our tackling was excellent, tactically we were better all round, but I`m sure TC will be looking to improve on some aspects of our game. While any away win is to be celebrated in a competitive league, maybe we could have scored a few more points and put the game out of Carlow`s reach earlier. So the year end s on a high note and lets more we have more of the same in 2022.