NARROW DEFEAT FOR OUR SENIOR MEN VS BOYNE 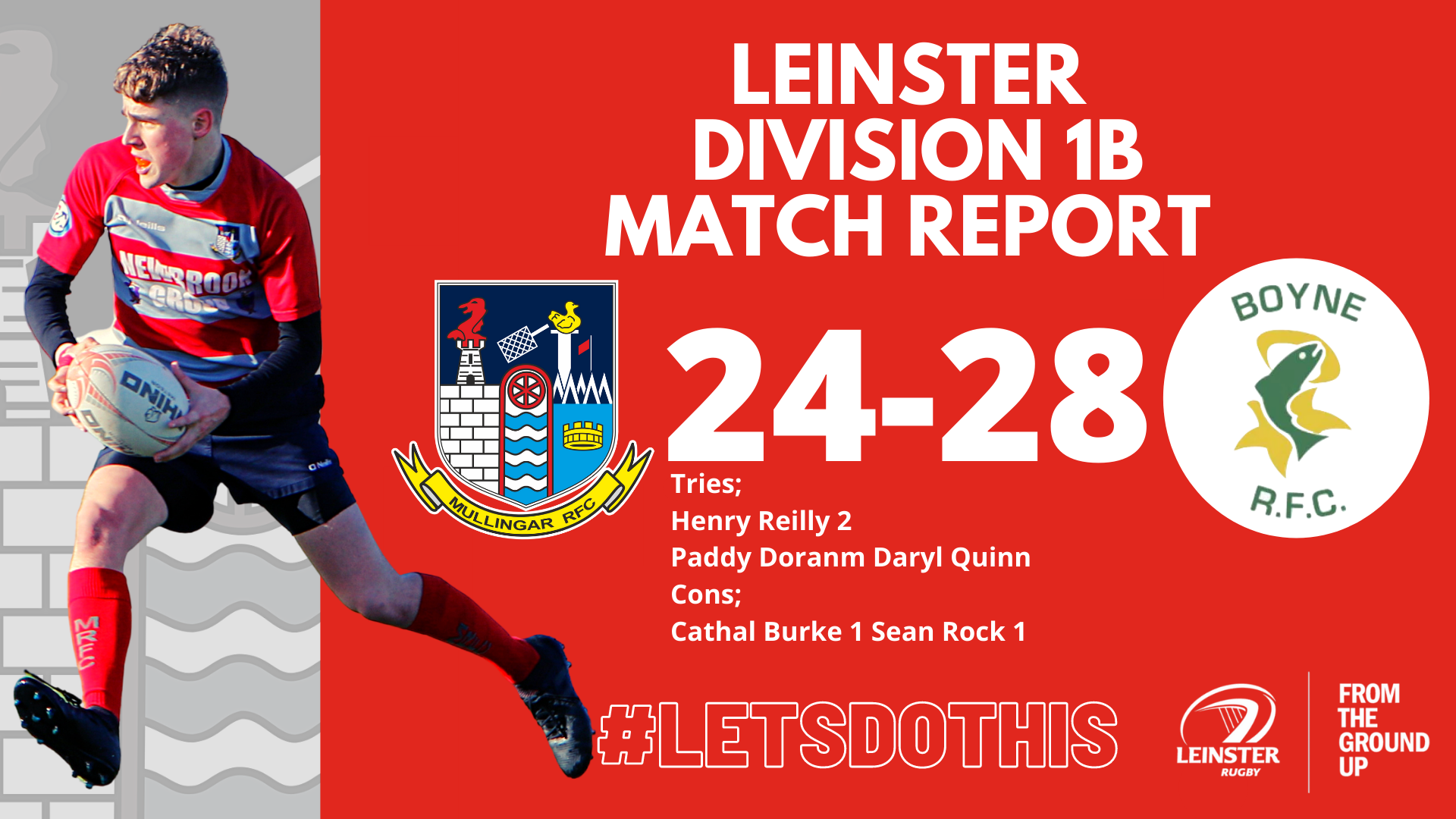 After 3 wins in a row, the visit of 2nd placed Boyne was always going to be a difficult game and so it transpired. Mullingar started well and after only 3 minutes Anto McGivney was quick on his feet after a tackle on the Boyne winger and Mullingar were awarded with a penalty for not releasing. The penalty was just inside the 22, but unfortunately the ball was just wide of the post. Mullingar continued attacking and spent most of the first 10 minutes in the Boyne half. We were awarded a 2nd penalty in the 7th minute. This time the penalty was just inside the 40m and again pretty central, but unfortunately again the ball was wide. Boyne started to get a bit more of the ball, after spending practically all of the first 10 minutes defending around their owns 22. A penalty awarded to Boyne was kicked into the Mullingar 22, about 10m from our line. Good work by our lineout won the ball and we cleared the lines. In the 13th minute a sweeping move by Boyne from a lineout on the Mullingar 40m, resulted in a try for the visitors, much against the run of play. The kick was converted and Boyne were 7-0 up. Our forwards were really up for the game and against a bigger pack; we more than held our own through all aspects of play except for 2 scrums which Boyne dominated in the early stages. Darrach Geraghty, Lemeki Vaipulu were very prominent in carrying to the Boyne defenders. Mullingar did have most of the possession and territory in the first 30 minutes, however the Boyne defence were not giving much away and Mullingar did make a few errors in attack, which resulted in the ball being turned over or a penalty awarded. Mullingar suffered a blow in the 32 minute when Alan Brabazon, who was having a good game had to be replaced due to an ankle injury. David Lynam came on to the wing with Anto McGivney moving to centre position. In the 35th minute Mullingar were awarded a penalty in the Boyne half and kicked to the corner. The lineout was won and the ball recycled a few times and then moved across to the right wing where Henry Reilly got in for a try, which went unconverted to reduce the deficit to 5-7. Boyne were shortly to increase their lead and were 5-14 up after a slick try by their speedy winger. However Mullingar were quick to respond and the youngest member of the team Paddy Doran got in for Mullingar`s 2nd try which was converted to leave the half time score at 12-14.

The second half got off to a blistering start with Boyne scoring another converted try in the 3rd minute to go 12-21 up. Mullingar were not overawed and through Chris Fox, Ben Glennon, Niall Hannon, Paul Maxwell we had some very strong carries and the youngster Paddy growing into the team nicely. Our half backs of Arthur Brabazon and Thomas Campbell were playing some good football. Cathal Burke and Anto McGivney were tackling hard in the centre, with Anto a danger when he got a bit of space, which was rare as the Boyne defence was quite good. Aaron Glennon had a few dangerous runs and David Lynam with 2 very good catches in the air, were very strong. Sean Rock was his usual sound under the high ball and dangerous in attack, without getting any reward for his work.

Daryl Quinn came on for Niall Hannon in the 50th minute for his first appearance on the 1st team after a long injury rehab. Alex Moran also came on to lend his experience to the final stages. In the 17th minute of the second half Boyne went 12-28 ahead with their 4th converted try. However this Mullingar team were not for giving up and as they had done in the first half kept attacking and were rewarded in the 22nd minute with a try by Henry Reilly. This was a team effort with Mullingar mauling their way to the Boyne line for the try. Again the conversion was missed. With the score now at 17-28 and now into the last 5 minutes Mullingar need something special to get something out of the game and so in the 76 minute Mullingar were awarded another penalty and again kicked to touch. With the lineout won another maul was set up and again Mullingar crept forward and again managed to cross the Boyne line with Daryl Quinn this time getting the touchdown. Sean Rock converted to leave the score at 24-28 in favour of the visitors. This try gave Mullingar 2 points from the game, a 4 try bonus point and 1 for losing by 7 or less. Again we reflect on what might have been after 2 penalty and 2 conversion misses, Boyne not having a single kick at goal during the game. Having lost away and at home by a total of 6 points to the team who are just 1 point behind leaders Wicklow, it says a lot for the work rate of all player and coaches this season.

On a day that was perfect for rugby, slight breeze, dry conditions and a bit of winter sun, our seconds suffered a second defeat in a row and only their 3rd of the season against a team they had beaten away. With only 6 players from the away game starting today, a few injuries has left this squad yet to gel. Boyne got off to a great start with a converted try in the 2nd minute. Mullingar pressed hard in the next few minutes but were undone after a tackle on a Mullingar player as he was about to score resulted in a scrum to Boyne 5m from their line. Boyne managed to run the ball from the scrum and aided by a few missed tackles from Mullingar scored their second try in the 8th minute. Mullingar got a try by Conal Fagan in the 15th minute to reduce the deficit to 5-14. Two further tries for Boyne and a second try for Mullingar by Paul Smith before half time left the half time score at 10-26 in favour of the visitors.

The second half was not as high scoring as the first half with 2 tries to Boyne and a further try by Mullingar`s Sean Cronin left the final score at 15-38. A bit of work needs to be done on tackling and retaining the ball, but we have to acknowledge the vast improvement on previous years seconds team`s results. Lets keep up the work and look forward to Cill Dara away next Sunday.

Our Senior Women play Edenderry in the Midlands league Plate Final in Longford at 13.00 Check out all senior and youth fixtures at www.mullingarrfc.ie and maybe play our Lotto for a chance to win €14,000 this week.