MULLINGAR EDGED OUT IN INJURY TIME AWAY TO CILL DARA 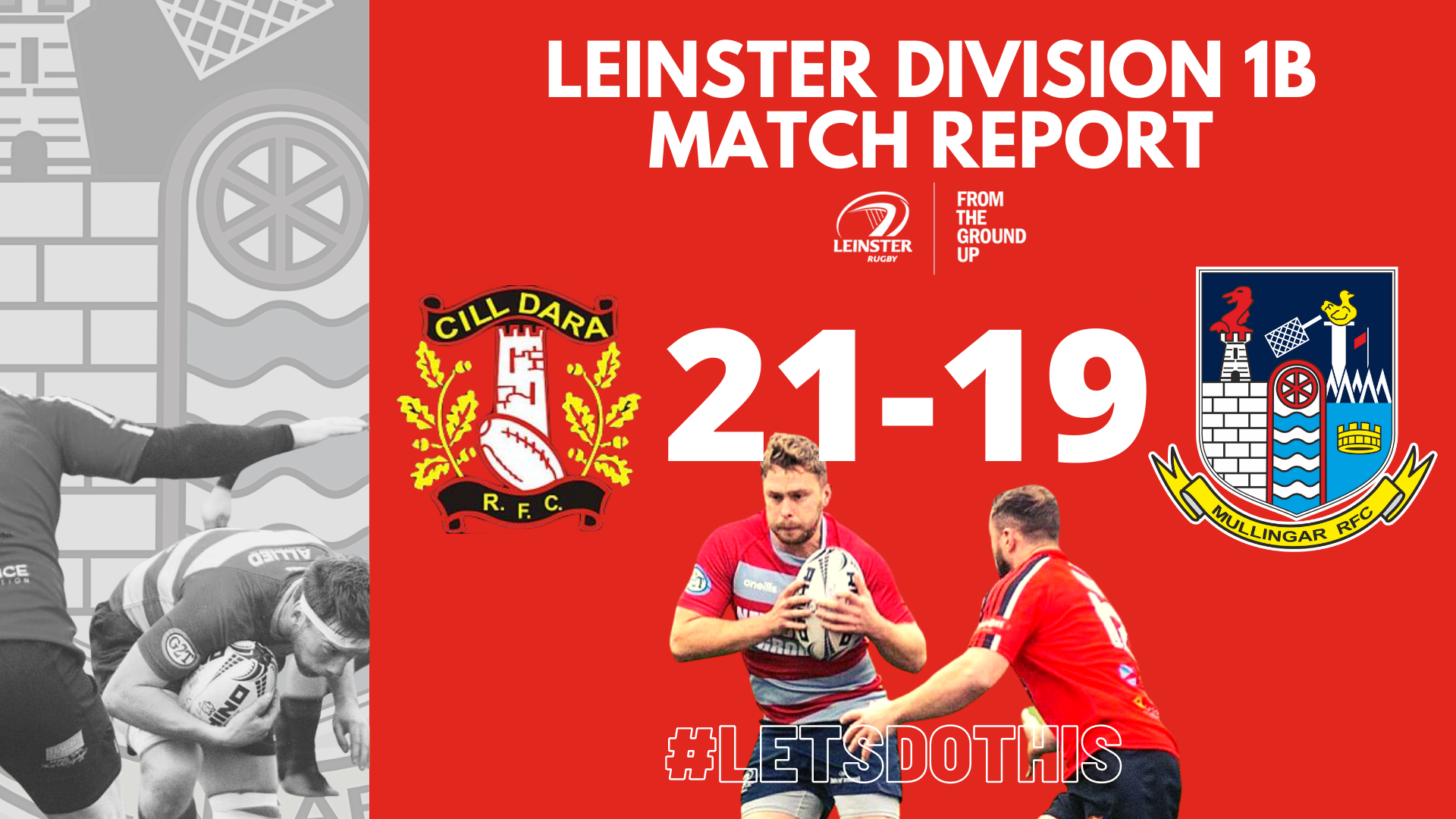 While temperatures were cool in the Curragh Sunday afternoon all other conditions were perfect for rugby, the ground was dry and there was only a slight breeze. Having suffered a narrow loss to Boyne at home the previous week Mullingar travelled hoping for another win to ease their relegation worries. Mullingar had won the reverse fixture earlier in the season by a one point margin so they knew that they were in for a difficult encounter. However, they started brightly and applied the early pressure in the Cill Dara 22 but the came away without a score as the conceded a penalty and allowed Cill Dara an easy exit.

Cill Dara could have taken the lead as they took their turn to apply pressure in the Mullingar 22 and it looked like they were going to score in the corner but a last ditch tackle from David Lynam held them out but the referee judged the tackle to be high and sent Lynam to the bin for 10 minutes. Mullingar held out and then a clean line break by captain Paul Maxwell took play down the field where he linked with Anthony McGivney who found Aaron Glennon on his shoulder and Glennon scampered over to get the first try of the game. Sean Rock added the two points from the kicking tee.

Mullingar had the bit between their teeth and they turned down a kickable penalty to go to the corner, they mauled the ball over the line and it was Paul Maxwell who got up last from the bundle of bodies to claim the try. Sean Rock narrowly missed the conversion.

Cill Dara regrouped at the 20 minute water break and came back strongly into the game, with their back line picking some good lines to take play deep into Mullingar territory forcing Mullingar into several infringements. The referee eventually lost patience and sent the Darach Geraghty to the bin for a 10 minute rest. This time Cill Dara were able to take advantage of their numerical advantage to cross the line and make the score 12-5. Mullingar almost scored again before half time after a fine break by Anthony McGivney but he could not find the final pass to David Lynam.

With Darach Geraghty returning to the fray Mullingar responded which prompted another fine break by Paul Maxwell, this time he didn’t need any help and he outstripped the chasing defence to score under the posts. Sean Rock slotted the conversion to make the score 19-10. Cill Dara did not fade from the game though they scored a penalty and a try to make the score 19-18 going into the last few minutes.

Mullingar had a kickable penalty to stretch their lead to 22-18 but they turned it down to kick to the corner. The referee judged the throw in to be crooked and this let Cill Dara off the hook and denied Mullingar a possible four try bonus point. With only one point in the game both teams were playing at a frantic pace and Cill Dara managed to win a kickable penalty which they slotted over to the take the win with the final kick of the game.

This result leaves Mullingar tied on points with Tullow and Longford with one of them likely to face a relegation play off. Mullingar have next week off which is welcome as it will give time for a few injured players to return before they face bottom placed Clondalkin at home before travelling to Longford and then Wicklow.