MULLINGAR BOUNCE BACK WITH AN EMPHATIC WIN 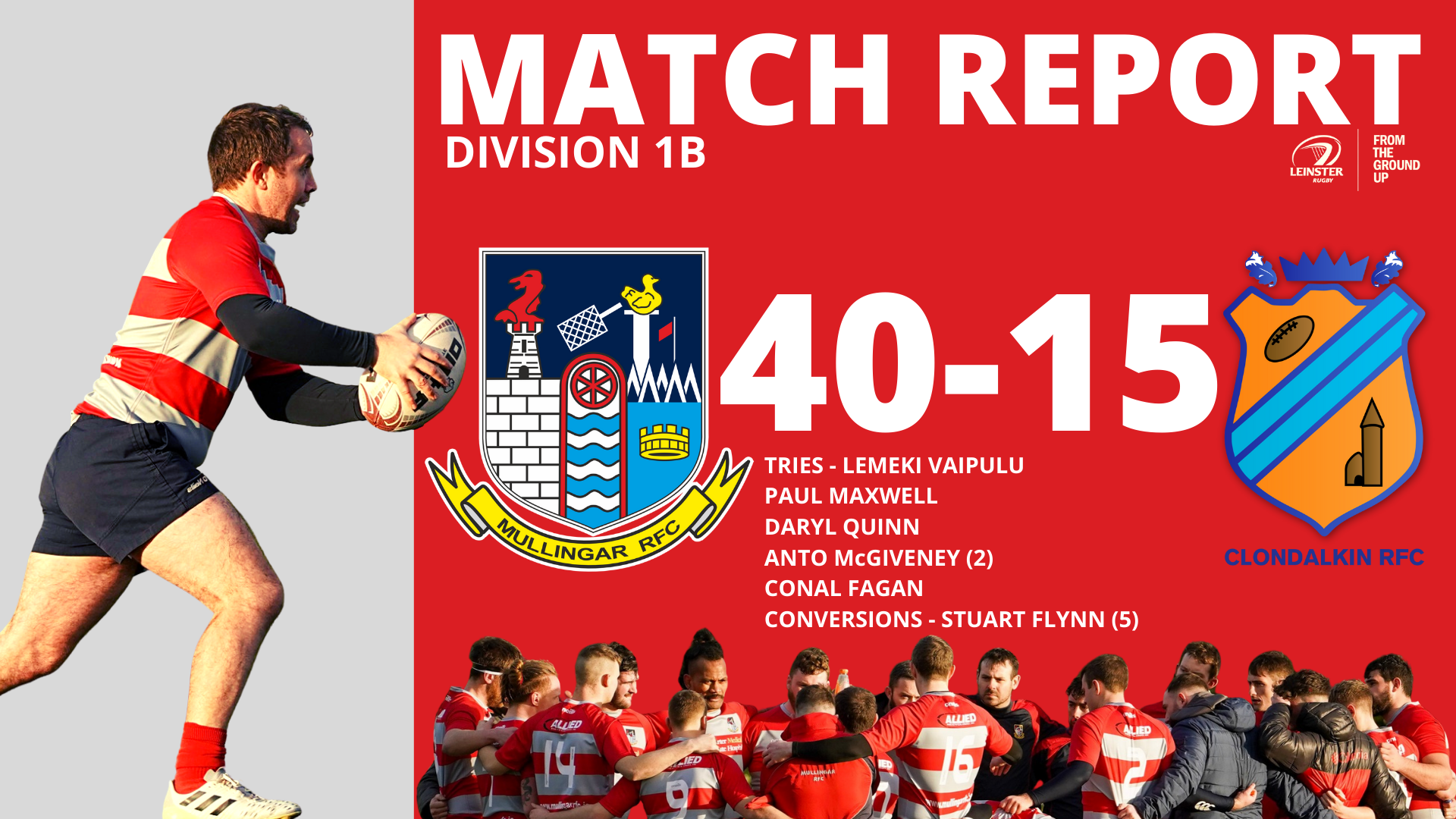 Mullingar got back on the winning trail at home on Sunday with a bonus try effort against the bottom team Clondalkin. Mullingar got off to a great start with a try by Lemeki Vaipulu in the 4th minute which was converted by Stuart Flynn. The conditions were dry and Mullingar played with a strong wind behind them in the first half. Mullingar got their second try in the 7th minute after the forwards had made a number of strong carries and Paul Maxwell got the final pass to run in the try, again converted by Stuart. The first half was played mainly in the Clondalkin half, as any time they got into the Mullingar half, Stuart used the wind to good affect and knocked them back with good well placed kicks. Mullingar`s forwards were dominating the game and this was evident in the 21st minute when some more strong play by our forwards led to Daryl Quinn crossing for our 3rd try and again Stuart added the extra 2 points to put Mullingar 21-0 up. Mullingar should have been awarded another try just before half time, when after a lineout 5m from the Clondalkin line, the forwards made a number of carries and Johnny Moran touched down, only for the referee to be unsited as he deemed the ball to be held up. However 21-0 at the break was a good lead.

Against the wind in the second half, Mullingar had to be more careful and so they were with some good running and our backs came into the game more. Anthony McGivney who had been dangerous with ball in hand all through the game got our 4th and bonus winning try in the 50th minute, which Stuart again converted. Mullingar dominated all aspects of the game from the front row of Ben Glennon, Conal Fagan and Johnny Moran. The lineout worked well especially as in such windy conditions, it’s not as easy to get the ball in straight. Conal Fagan making his debut for the first team had a good day in both scrums and lineouts and indeed around the field. Daryl Quinn had his first start of the season and with second row partner Darach Geraghty kept the Clondalkin defence busy. Our back row of Lemeki, Maxi and Niall Hannon, while contributing 2 tries were very prominent all during the game. Mullingar were well marshalled from the half backs with TC dictating the plays and Stuart Flynn using his boot to good effect. Centres Cathal Burke and Anto with the wings Eoghan Moore and Aaron Glennon, were always a treat and our last line of defence in the firm hands of Daire Conway. After Mullingar had gone 28-0 up Clondalkin upped their game a bit as they were now confirmed as relegated, being as they would have needed to win with a bonus point to have had any chance of staying in Division 1B and this was something Mullingar were not going to give them on Sunday. Clondalkin got in for 2 tries in the 55th and 63rd minute, both of which were unconverted to bring the score back to 28-10. However Mullingar weren’t going to let the game slip and in the 75th minute Conal Fagan marked his first start with our 5th try and Stuart again added the conversion. Clondalkin`s dropped off restart was fielded by Anthony McGivney and he promptly weaved his way through the Clondalkin defence to score our 6th and final try. Stuart`s conversion attempt hit the post thus denying him a perfect kicking record for the day. Clondalkin managed a late try in the 80th minute to leave the score at 40-15.Allof the subs got some game time today and made a contribution to the team effort. Next Sunday we head to Longford for the 2nd last league game and another big game against local rivals.