BRILLIANT LAST QUARTER SEES OUR SECONDS ADVANCE IN THE CUP 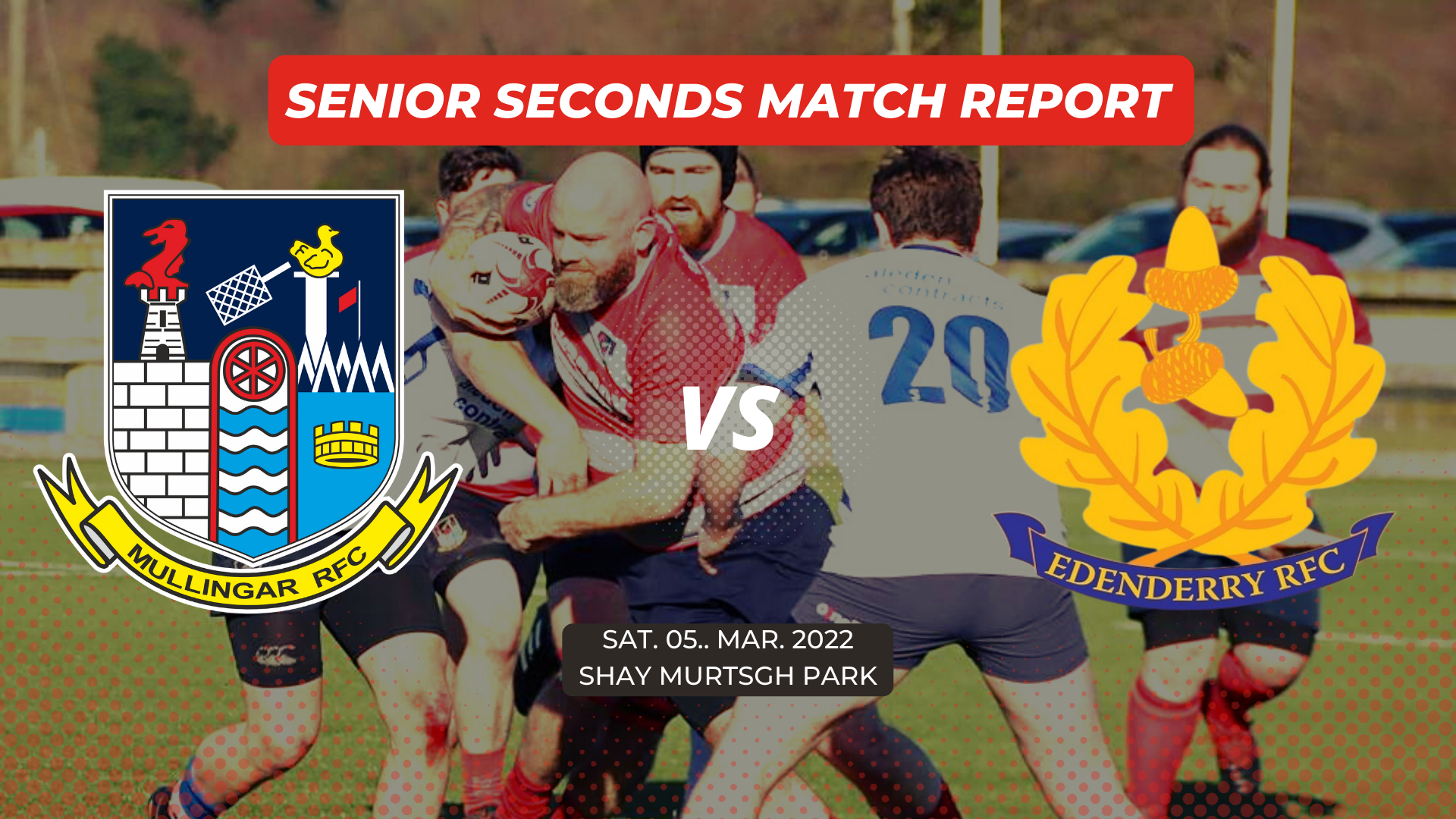 This season’s version of the Provincial Town Seconds Cup saw Mullingar drawn to play local rivals, Edenderry in Shay Murtagh Park. Spring was definitely in the air as conditions were warm and bright at kick off. Mullingar captain, Killian McNay, set out his stall from the kick off as he caught the kick and carried the ball to the Edenderry defence shaking off some would be attackers before he was eventually brought down, several phases later outhalf, James Kerrigan, put Daragh Lambe through a gap in midfield. Lambe made his way into the Edenderry 22 and he managed to find fullback, Conor Hayden, who dotted down to seal the perfect start. Hayden converted his own try to make the score 7-0.

From the resultant kick off Mullingar overplayed in their own half and some errors led to a turnover. Having obtained some possession Edenderry looked to put together some phases but Mullingar back row, Cillian Kavanagh, stripped the ball in the tackle and with the Edenderry fullback in the attacking line he had a clear run to the line, he pinned his ears back and managed to make the 60 metres to the try line before any Edenderry defenders could close him down. The score was now 12-0.

However Edenderry were not going to go down without a fight and through some better play and Mullingar indiscipline they started to apply some pressure and eventually crashed over in the corner to make the score 12-5. Mullingar didn’t panic though, shortly after the kick off Mullingar were awarded a penalty which Conor Hayden kicked into the Edenderry 22. Mullingar executed their lineout well and after a good carry by Danny Gilleran and a quick ruck out-half James Kerrigan looked to have got over for Mullingar’s third try but the referee adjudged it to be held up and Edenderry were able to clear their line with a goal line dropout and they managed to win a scrum just inside Mullingar’s half. Off the scrum the Edenderry outhalf was able to find a hole in the Mullingar cover defence and scampered over to score under the posts which he duly converted to make the score 12-12.

Mullingar attempted to re-establish their lead before half time and some good play brought a penalty in the Edenderry 22 which they tapped and passed to Killian McNay who charged for the line and he looked to have scored but the referee again deemed the Mullingar player to be held up. There was no time remaining for the goal line drop out as the referee blew the whistle for half time.

The start of the second half was a tense affair with neither team able to build enough sustained pressure to break the deadlock. Eventually 15 minutes from full time Edenderry were awarded a penalty in front of the posts and they kicked the penalty to get their noses in front for the first time in the match. From the kick off Edenderry were able to obtain possession and they managed to kick deep into the Mullingar half and found touch to pin Mullingar back their own half. A mistake from Edenderry awarded Mullingar a scrum in their 22 and a nice move put No. 8 cum centre Sean Cronin into space and he showed the Edenderry defence a clean pair of heels to go all the way to the try line. Conor Hayden converted to make the score 19-15.

With some fresh legs off the bench Mullingar didn’t look to hang onto their lead, some quality phases with carries from Conor Hayden and Martin Egan forced Edenderry to concede a penalty in the 22 which Conor Hayden kicked to push the score out to 22-15.

The movement of Sean Cronin to the centre yielded more dividends when he broke the line again and made his way into the Edenderry half, after a quick ruck the ball was moved to Conor Hayden who cantered in to score under the posts. He converted to give Mullingar a commanding 29-15 lead with about 5 minutes to go. Edenderry played with renewed vigour and from the kick off they secured the ball and carried hard at the Mullingar line but their defence held firm and eventually a loose pass went to ground which Jordie Williams picked up and showed good pace and strength to bring play up to half way where he linked with Cillian Kavanagh who found winger Jamie Daly. Jamie showed some good footwork to evade several Edenderry defenders and then found James Kerrigan who was running a good support line. James crossed the line to get the final score of the game to make it 34-15 in what was a well contested cup match. Captain Killian McNay celebrates his birthday on Sunday and this cup win made the perfect birthday present.