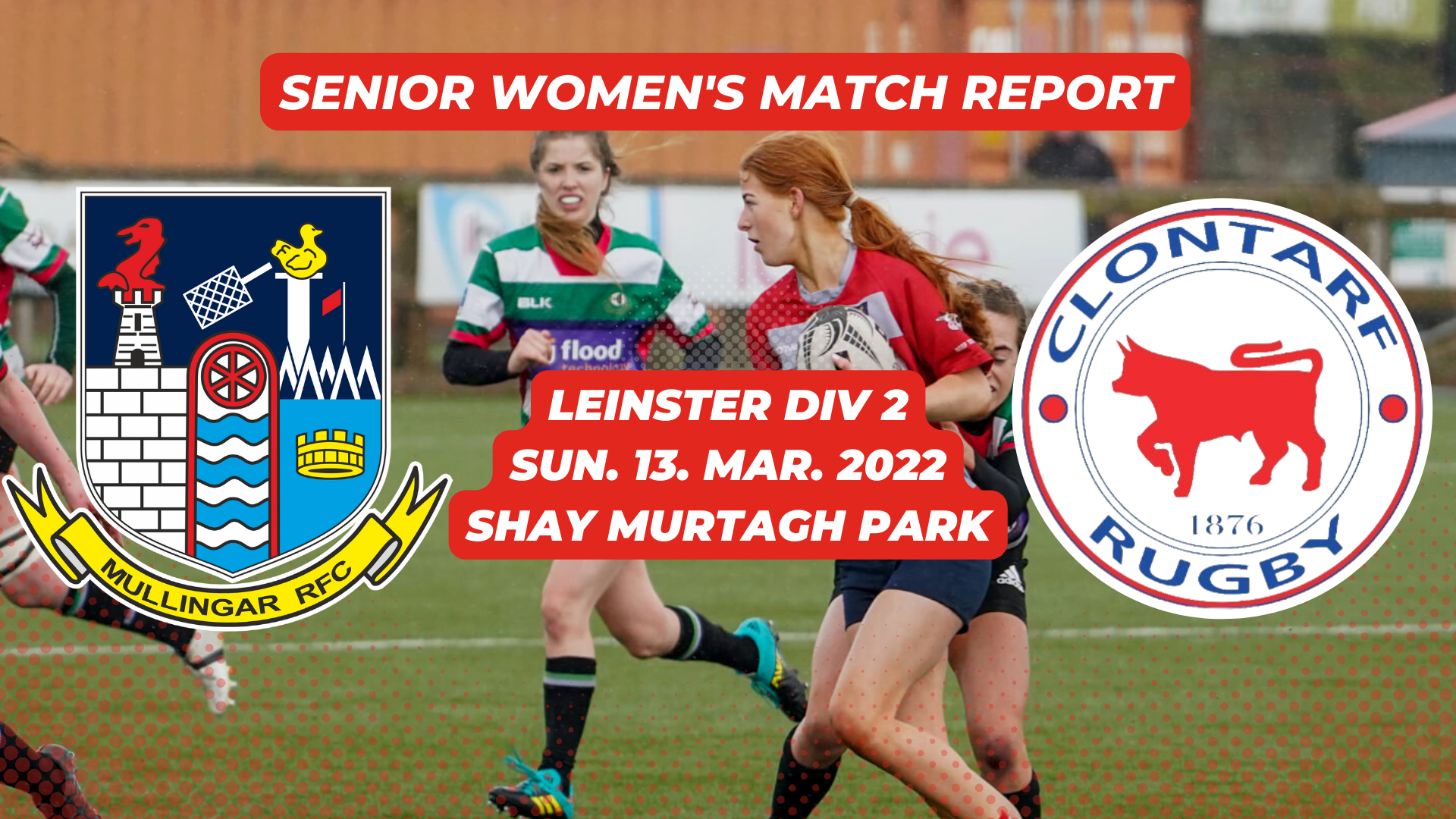 A bright a sunny start awaited Mullingar's Women's team and Clontarf at Shay Murtagh Park on Sunday. Deep in their hearts Mullingar knew they had a win in them and silently hoped this would be the day luck was on their side with the added bonus of double header points up for grabs.

Within minutes of kick off they had scores on the board. The trusted hands of Gemma Faulkner saw her score a fast paced try right under the posts, as always the reliable boot of Foxe converted. The Mullingar support were out of their seats with excitement. Moments later Captain Eadaoin Liddy used her relentless drive and determination to drive through Clontarf's defences. Foxe converted easily. The ever-reliable Clodagh O Brien capitalised on a lapse of concentration in Clontarf's defence to prove her importance on the Mullingar panel.

Again the golden boot of Foxe was on target. Young Faulkner broke through two tackles wasn’t held and then even after a wayward Clontarf foot slowed her progress the quick thinking quick feet and intense drive pushed her into open space where she scored an impressive try. Again Foxe converted.

Today was a day off firsts, Sophie Treanor scored her first try whipping through defenders to touch down in the corner. A tricky angle denied Foxe a conversion. Minutes later Treanor decided she’d go two for two and scored again right between the posts. Foxe converted. Mullingar's hands and support running enabled the breaks and strong forceful tackles prevented any Clontarf breaks.

Clontarf were lucky with some high tackles not to have been punished. 33minutes in and they finally found the try line. 35 mins into the game and Mullingar held a 40-7 lead. Could this be the result we all knew they had in them could the efforts to rebuild finally be paying off?

Sadly in the second half Clodagh O’Brien suffered a nasty cut on her leg and had to come off, a huge loss for Mullingar., but a negative turned into a massive positive when young Kara Mulcahy made her senior debut.  Not long on the pitch and she awarded the senior belief in her with a try between the posts. The Mullingar supporters were hopping with excitement. Foxe again found the conversion sweet spot. But the tries were not only for the youngest players on the pitch, the Mullingar stalwart  Ciara Wynne was rewarded for all her work with a try. The heifer resolve, commitment and resilience was finally paying off.

The women showed some great skill and impressive support play. The women every week put their hearts and souls into their games and today was an impressive game to watch. The Flood and O’Brien sisters each gave a masterclass in tackle technique. Mullingar's front row proved too much for Clontarf who went to uncontested scrums, visually Clontarf looked like worthy combatants but Lou Hargadon, Tracey Finerty, Judy Dowling and Niamh Gough combined their vast experience to put a clear stamp on the Mullingar defensive line. Mullingar were unfortunate to lose out on two tries held up on the line. Foxe was denied a try but Kara Mulcahy decided she too would go two for two. Foxe's boot was on fire and again she converted. Not to be out done she then decided to add her name to the try list and to top it off with yet another conversion.

Throughout the game Susie Burzawa thwarted any attempts to break the Mullingar line anticipating any change in direction and consistently making strong tackles and pushing back any advances a real workhorse in the middle of the park. Orla Cleere our recent rugby convert has shown some outstanding drives and ability to read the game, sadly a cramp 15 minutes into the second half ended her contribution today but gave Rebecca Forde an opportunity to become involved in a face paced demanding game. Every girl had the respect of the small crowd with most audibly enthusiastic when they saw the efforts paying off.

Today dividends finally paid off each player putting their all in and presenting a thoroughly exciting game to watch. Todays efforts create a very promising future, one the girls deserve to enjoy.