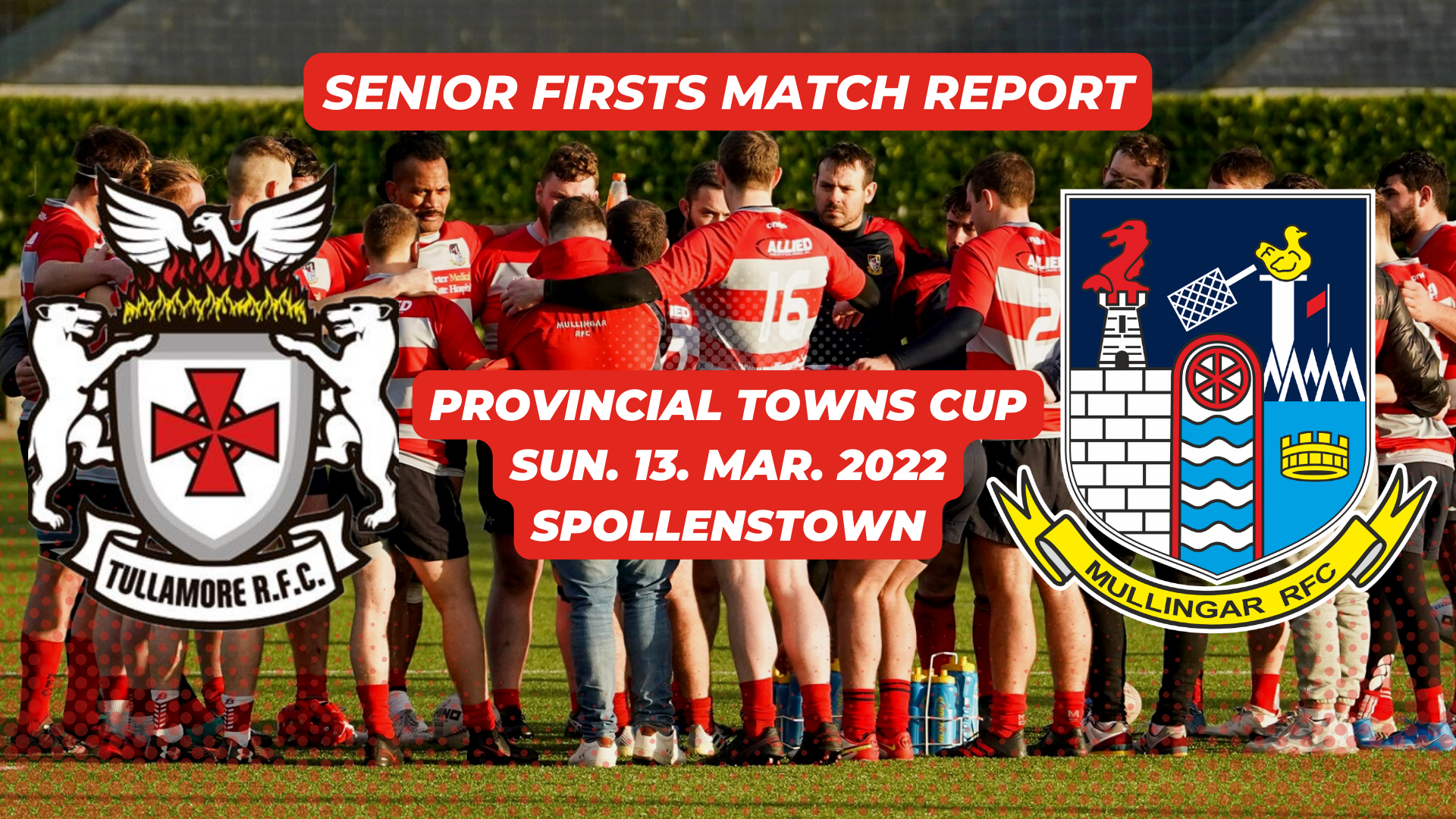 After a stormy night the sun was shining in Spollanstown as Mullingar took to the field to face their neighbours, Tullamore, in the 2nd Round of the Provincial Towns Cup. Due to some fixture congestion the match also doubled up as the Midland League Final so there was an air of anticipation as both sets of spectators gathered in advance of the match.

Tullamore settled into the game first and made a foray into the Mullingar half before a knock on brought the first scrum of the game. The Mullingar pack earned an early psychological edge by winning a scrum penalty, they kicked to touch and won the lineout to allow Lemeki Vaipulu carry the ball to the Tullamore defence and he made significant inroads. With the Tullamore defence back pedalling outhalf Stuart Flynn set his outside backs free. Under pressure Tullamore conceded another penalty which Flynn kicked into the 22. Mullingar won clean ball at the lineout and this time they elected to maul and were making progress towards the line when the ball was released to captain, Paul Maxwell, who carried hard at the line but the Tullamore defence held firm. The referee adjudged Tullamore’s efforts to be illegal and awarded a penalty to Mullingar which Stuart Flynn slotted over the bar for the first score of the game.

From the kick off Lemeki claimed the ball and set up a platform for Stuart Flynn to kick deep into the Tullamore half and into touch. Tullamore failed to throw the ball straight into the lineout which gave Mullingar the put in to the scrum. After some good carries from the Mullingar forwards, Tullamore conceded another penalty and this time Flynn turned down the three points on offer and kicked into the corner. The Mullingar pack won the lineout and mauled the ball close to the line but couldn’t get over, the ball was recycled and after several surges at the try line, Alex Moran crossed under the sticks to leave Flynn with a simple conversion to make the score 10-0.

From the next kick off Mullingar were unable to successfully exit as outhalf Flynn kicked the ball straight into touch to give Tullamore field position in the Mullingar half. Tullamore won the lineout and after several phases Mullingar conceded a penalty which Tullamore elected to kick at the posts. The ball dropped short and Mullingar cleared their lines with Sean Rock kicking the ball back, a good kick chase allowed Mullingar to regain possession and this time Stuart Flynn judged the wind perfectly to kick the ball over the head of the Tullamore winger and into touch to earn a 50-22. Mullingar mauled the ball again and moved the ball deep into the Tullamore 22 before releasing the ball to the Mullingar backs, Anthony McGivney was held up short which allowed the Mullingar pack to take over again with good carries from second row, Daryl Quinn and No. 8 Paddy Doran and they looked like they were going to cross for another try put the referee awarded a penalty to Tullamore because a Mullingar player lost their feet in the ruck. This proved to be a turning point in the game as a try here would have given Mullingar a 17-0 lead but Tullamore were able to clear their lines and work their way into the game.

A scrum penalty afforded Tullamore a shot at the posts which they duly slotted over to make the score 10-3. There then followed a long passage of play with play ebbing and flowing both ways before a loose kick allowed the Tullamore outhalf to make a break up the middle of the pitch and pass to his winger who scored in the corner. The score was now 10-8 to Mullingar. Stuart Flynn kicked a perfect restart to bounce the ball into touch a metre short of the try line but the touch judge deemed the ball to have gone into touch in goal which meant a scrum for Tullamore on the half way line. This allowed Tullamore entry in the Mullingar half and they kicked another penalty on the stroke of half time to take a 11-10 lead into the half-time break.

Despite strong words in the Mullingar huddle at half time a mix up on the kick off meant a knock on gave Tullamore a scrum in the Mullingar 22. This put Mullingar under pressure and only a knock on just short of the line allowed Mullingar to clear their lines. At this point Mullingar captain, Paul Maxwell, had to leave the pitch with an injury with David Lynam being introduced as his replacement. Tullamore continued to apply the pressure and they were deep in the Mullingar 22 again but a jackal turnover by Daryl Quinn forced a penalty. From the resultant lineout, second row, Darach Geraghty suffered an injury and had to be replaced by Luke Finegan. A yellow card for full-back Sean Rock for back chat to the referee reduced Mullingar to 14 men for 10 minutes and everything seemed to be going against Mullingar. Then came a hammer blow, a clever grubber in behind the Mullingar defence created a difficult situation for Mullingar winger, David Lynam, and he was beaten to the bobbling ball by the chasing Tullamore winger who dotted down to make the score 16-10 to Tullamore.

However Mullingar did not panic and they hit the reset button and went back to what was working for them in the first 20 minutes of the match. They forced consecutive penalties from Tullamore and worked their way up the pitch to find themselves 5 metres from the Tullamore try line and it looked like Ben Glennon had crashed over for a try under the posts but the referee deemed the ball to be held up. As bodies were picking themselves up from the ground words were exchanged and there was some handbags but after consulting his assistants the referee warranted it serious enough to award a yellow card to both a Tullamore man and Ben Glennon – he also awarded Tullamore a penalty which allowed them to clear their lines. But Mullingar kept coming and a nice passage of play with Conall Fagan, Paddy Doran and Anthony McGivney featuring prominently found Eoghan Moore in space on the left wing to cross for Mullingar’s second try. Stuart Flynn was not able to add the conversion due to a strong wind, the score was now 16-15 to Tullamore.

From the kick off Tullamore kicked the ball out on the full which meant Mullingar had a scrum on the half way line, there was definitely a momentum swing underway. From the scrum, debutant scrum-half Dan O’Connor, who had a fine game, picked and raced up the right side of the pitch to bring play to the Tullamore 22. Another carry from Paddy Doran and then Mullingar moved the ball to the left to find Daryl Quinn who used all his experience to dummy the Tullamore defence and reach for the line to give Mullingar a 20-16 lead. Mullingar threatened to run riot but another yellow card, this time for Daryl Quinn, again for back talk to the referee, halted their momentum and made for a tense last few minutes. But Mullingar used their experience to close out the game and ensure that they were in the hat for the next to round of the cup and claim the Glennon Memorial Trophy.

It has been a long time since Mullingar reached the Provincial Towns Cup quarter final, in fact you have to go all the way back to 2008 to find the last time Mullingar progressed this far, on that occasion they lost 35-3 to Cill Dara RFC. And all roads lead to Cill Dara RFC next Sunday at 3.00pm as Mullingar face DSLP in a Leinster League relegation play off – all support greatly appreciated. They will then face Clondalkin in the cup quarter final on Sunday 27th March in Shay Murtagh Park.