SENSATIONAL MULLINGAR TURN ON THE STYLE AGAINST DUNDALK 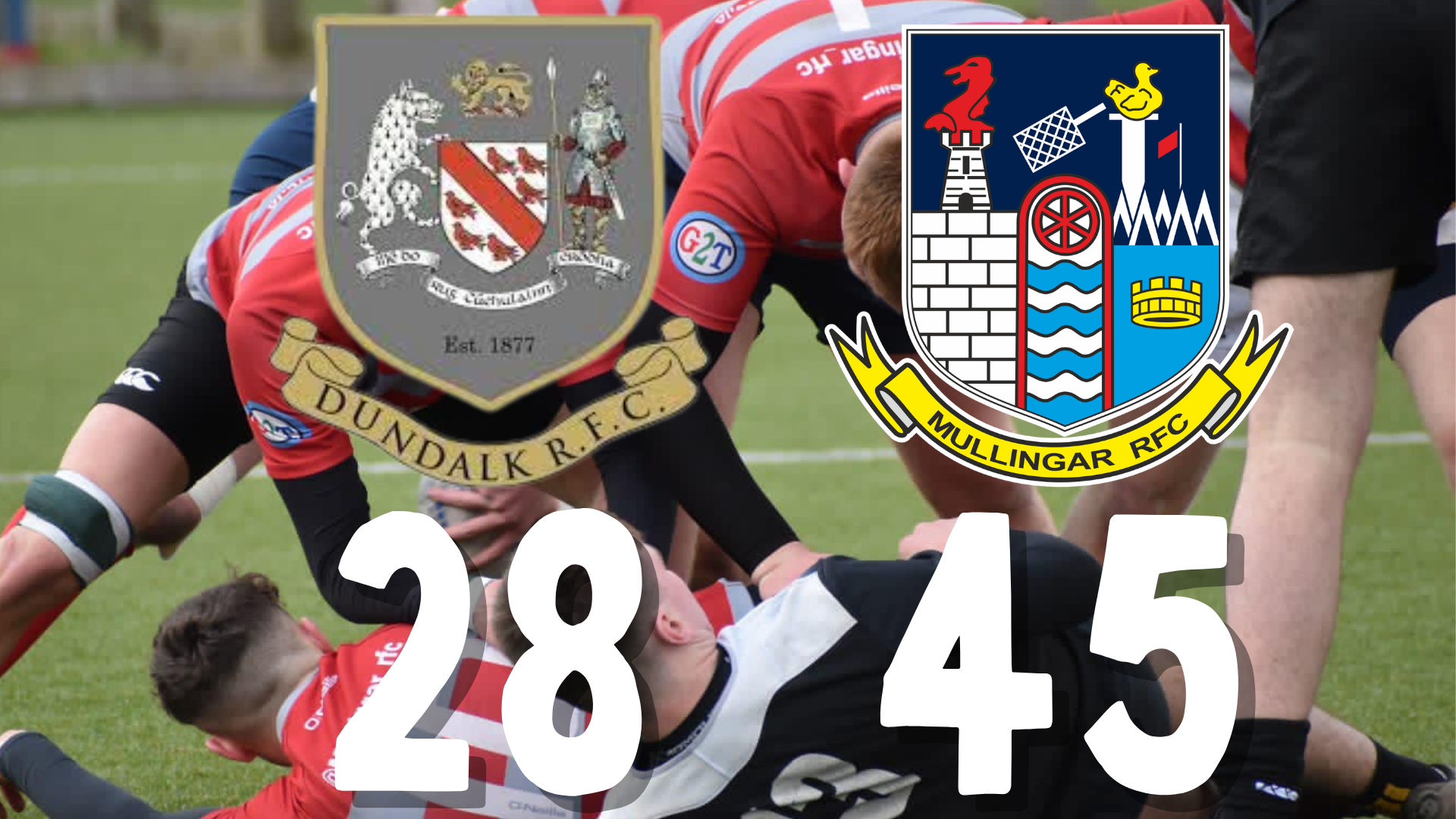 Following on from weeks 27-25 win over neighbours Longford, we had the long journey to the North East for the game against Dundalk. It`s been a good few years since we player Dundalk at senior level as they had spent a few years in the AIL and owing to their relegation last year from Div 1A, we now were to renew acquaintances. Last week Dundalk had a good away win against title favourites Wicklow so it was more in hope that we travelled than expectation. Mullingar got off to a great start and after some good play by the forwards the ball was moved to the wing where David Manning powered his way into the Dundalk goal area and has the foresight to carry the ball about 20 metres nearer the posts to make the conversion easier for Rangi, who duly obliged to make it 0-7. Some good play by Dundalk brought play into the Mullingar 22 where they were awarded a penalty to reduce the lead to 3-7. However it was Mullingar who were dominating most of the play and the Mullingar backline were making breaks and when needed good tackles. A good move up the left wing by Eoghan Moore who made good ground and offloaded to Paul Maxwell to score Mullingar`s2nd try to put the score at 3-12. Dundalk hit back with a try of their own, to reduce the deficit to 8-12. Mullingar soon increased their lead again after a drive into the Dundalk 22. The referee awarded Mullingar a penalty and Daryl Quinn took a quick tap and powered over for Mullingar`s 3rd try after 25 minutes of the first half and a score of 8-19. Dare were we to think of a 4 try bonus and a win away. However Dundalk were to hit back with a second try to reduce their deficit to 13-19. Mullingar however were not easing up on their pressure and a second try by David Manning who was a storming game in general with his tackles and running. A further penalty from Dundalk brought the score to 16-24 in favour of Mullingar, just as the half time whistle came. Mullingar`s back row of Niall Hannon, Paul Maxwell and Paddy Doran had been dominating the loose play ably assisted by second rows of Daryl Quinn and Alan Naughton. The starting front row of Donal McGovern and Johnny Moran with Brian Reidy in the middle more than held their own. Darragh Lambe and Sean Cronin came on for Johnny Moran and Niall Hannon followed by early in the second half David Lynam replacing Cathal Burke who had an injury. Cathal having played his best game in a Mullingar shirt for a while, which can also be said of Arthur Brabazon, putting in a busy shift at scrum half. Dundalk upped their play in the 2nd half and reduced the lead to 23-24, but every time Dundalk scored Mullingar seemed to again raise their game and that 1 point deficit would be the nearest they would come to Mullingar for the rest of the game.  A number of rucks brought play into the Dundalk 22 and Paul Maxwell powered over the line, however the referee being on the wrong side did not see the grounding and brought play back for a Mullingar penalty on the 5 m line. Daryl Quinn took the penalty and after a couple of carries by Mullingar Maxi got over again, this time with no doubt and now the lead was back to 8 points. Chris Fox and Johnny Moran with Conal Fagan were on to finish out the game and continue the good work of the forwards in general. Our 6th try was definitely the pick of the day as Dundalk were pressing hard and attacking in the Mullingar 22. However a turnover allowed Mullingar initially take the ball on for a few rucks and then moved the ball to the wing, back in to the middle and a few minutes later we were in the Mullingar 22 with Anto McGivney making the final break and seemingly with the line at his mercy passed to David Manning to go in for his Hat Trick of tries, (Maxi crossing for 3 but only 2 awarded does not count). A fitting end to David`s work for the day. The try fest wasn’t finished as Dundalk came back for a 4th try to give them a 4 try bonus point. Mullingar finished strongly and had the final try from Rangi as he had also done in the final minutes of the Longford game to leave him with a try and 5 conversions. Every single player today contributed to this win from the reliable Sean Rock at full back to the front row.

Next Week`s fixtures; No Senior games