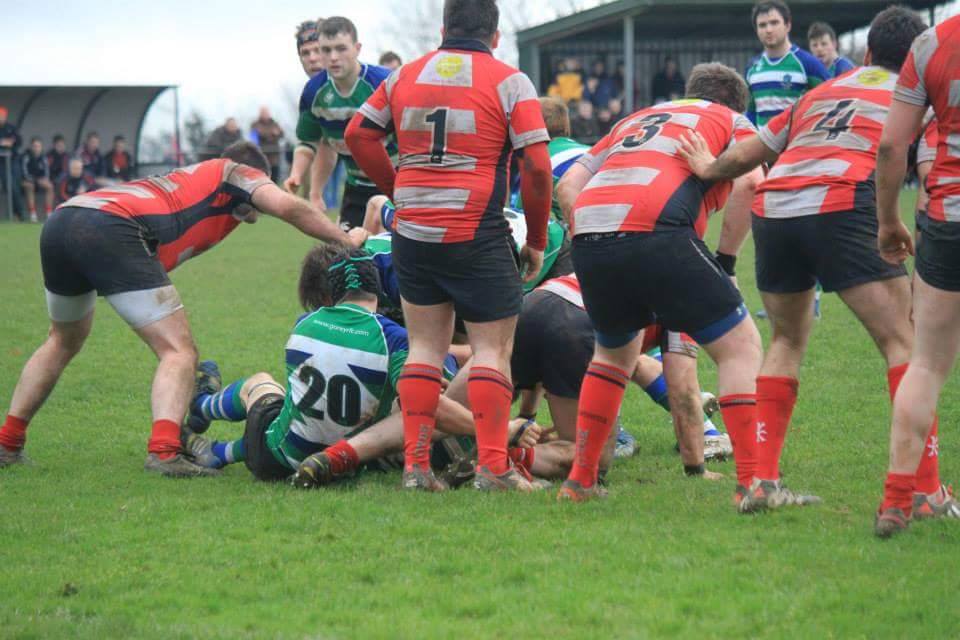 By Finian Coghlan
Four inches. The width of a fist. After nearly an hour and a half of
breathless, scintillating cup rugby it was just the width of the crossbar
that ultimately separated these two teams of Trojans at Coolattin Park in
Gorey on Sunday afternoon when just one of the home sideâs three
conversions bounced over off the bar.
Mullingar came with a cool intensity and well-drilled game plan, and led
all the way until the 71st minute, which left the best part of 1,000
squeaky bums on the home touchline, before Gorey broke the visiting hearts.
The game was played at a ridiculous pace which saw Jack, Brabazon and
Gantly lead the way in auditioning for the Imperial Japanese air force,
such was their contemptuous disregard for the integrity of their own faces.
Up front the attrition was even worse, and the injuries to Mullingarâs
three named props led to uncontested scrums for the final five minutes of
this pulsating contest.
However, such was the supremacy of the Mullingar pack up til then, this
scenario actually favoured the hosts in closing out, which they managed
with excruciating efficiency.
Mullingar brought a great hunger early doors and their pressure and guile
gave Butler two kickables in the first 14 minutes which he slotted cooly
for a 6-0 lead.
Sensibly, Mullingar did not rest on these laurels, and earned another two
in the ensuing 15 minutes, but both were pulled and Gorey were still in
strike distance.
This they took advantage of in the 33rd minute in what was their first
meaningful foray into Mullingarâs 22.
A silly penalty concession allowed the hosts to go for the corner, and just
six phases later they managed to force their way over for an opening
unconverted try to leave the halftime score at 6-5.
Unsurprisingly, Gorey brought an added intensity to the opening exchanges
but the defence was ferocious and stalwart.
Five minutes in it looked like Cormac Dunne had snaffled an intercept off
the back of a Gorey scrum in their own 22, but the ref called him back for
a hint of over-anticipation.
Gorey were warned and rattled, and with the home crowd finding voice, began
to thunder into Mullingar territory.
Half time sub Andrew Coade exercised the first rescue mission in a
two-on-one, and bundled their ball carrier into touch only metres out.
Mullingar girded and cleared again, but still they came.
The green rub came in the 54th minute, when Gorey ran right from the
halfway line with what looked like a two man overlap.
However, they had not factored for the Campesability of Coade who stuck out
an intercept paw on the pass destined for the overlappers and he was off.
Knowing his superior zippyness, the Mullingar bench was celebrating as soon
as he crossed the halfway line, and all of a sudden, the visitors were now
a very relieving eight points clear.
Fair play to Gorey, however, but they refused to lie down and their
endeavours were rewarded in the 63rd minute when a crossfield kick was
collected and deposited in the corner, despite a hint of the covering Coade
being interfered with by a third man.
To rub further salt, the Gorey kicker landed the conversion via that cross
bar, and it was now back to a one point game with all hands on deck.
Straight from the re-start, though, Gorey conceded a soft penalty and
Butler once again extended the breathing space to four points with just 15
minutes remaining.
Now we were into cup football, and there was hardly an unscathed fingernail
across the grounds as divisionally superior Gorey scrabbled for their pride.
However, Mullingar just couldnât seem to get their hands on any meaningful
ball, as the tide began to turn.
Breakthrough was finally achieved in the 71st minute with Mullingar
stretched all over the park, and they ran the killer score into the right
hand corner to go 17-16 up.
Now it was Mullingarâs turn to not lie down, and though they lost their
talismanic biffer-in-chief Blair with a neck injury that subsequently saw
him hospitalised for observation, they rallied back into Gorey territory
for one last go.
With seven minutes remaining they conceded a long range kickable, but the
distance was just beyond the boot of Butler, and Gorey exhaled collectively.
This was their last fright and they learnt from the lesson. Despite
Mullingarâs best efforts, the home side managed to keep meaningful
possession from them for the remaining fraught minutes and earn their place
in the second round hat.
Other results
The Mullingar ladies earned a very creditable 3-3 draw away to Edenderry â
the only team to have beaten them all year â and are now just two points
off the top of Leinster Division 1 with a game in hand and two to play
which leaves their promotion possibilities very much in their own hands.
Tries: Andrew Coade.
Pens: Butler 3
Cons: Butler
Team: 1. Darren âDazâ Brady, 2. Davy OâReilly , 3 Ciaran O'Donoghue, 4.
Ritchie Pyke, 5. Darryl Quinn , 6. Paul Maxwell , 7. Cormac Dunne, 8.
Samuel Blair, 9. Arthur Brabazon, 10. Conor Jack , 11. Ronan Wallace, 12.
Alan Brabazon, 13. Eoghan Gantly, 14. Henry Reilly, 15. Johnny Butler. Subs
used: Nigel Mills, Ryan Tighe, Niall Hannon, Andrew Coade, Alex Moran.
Top try scorers 25.1.15: Andrew Coade (12),Olive Butler (10) , Matthew
Coade, Sam Blair (8), Paul Maxwell (6) Louise Kelly, Johnny Butler (5)
Stacy Boland, RyanTighe (4), Diarmuid Raleigh, Ronan Wallace, Conor Jack
(3), Adam Kerroum, Davy OâReilly, Richie Pyke, Darren Brady, Nigel Mills,
Henry Reilly (2), Darech Geraghty, Cormac Dunne, Luke Peppard, Eoghan
Gantly, Alan Brabazon, Arthur Brabazon, Niall Hannon.
Tries for: 70, Against :24.