Heifer heartbreak in Tullow as title goes to Edenderry 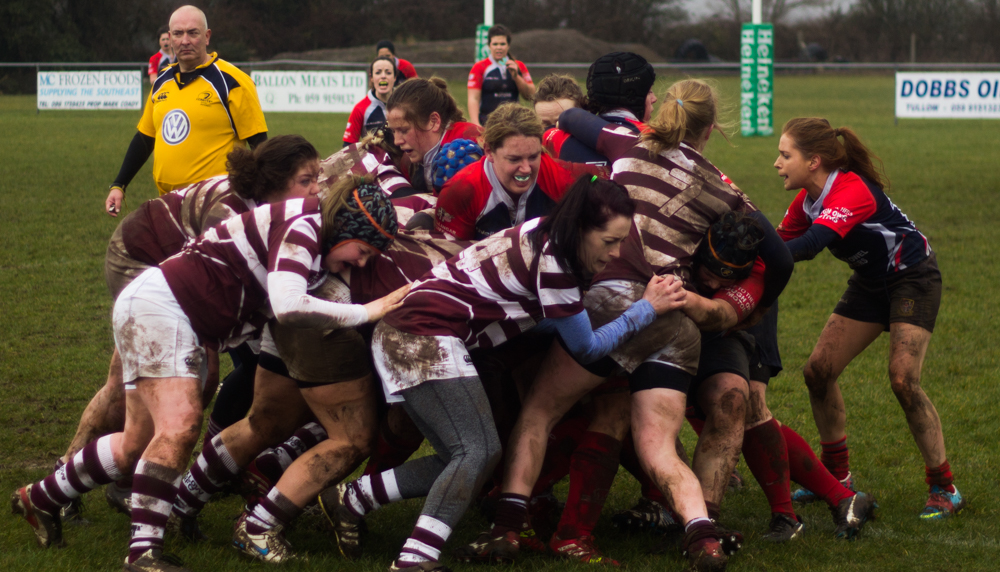 SUNDAY 22nd MARCH
TULLOW 6 MRFC 3
By Finian Coghlan
Unpleasant and all as Loserville is, they women of Mullingar have been here
before, and though there was some weeping and gnashing of frustrated teeth
in the immediate aftermath of this cruellest of defeats, the unity and
solidarity of the herd as witnessed in the post mortem gives great succour
for the future.
Yes, Mullingar women will have woken up this morning and realised that they
are not the Leinster champions, and that will smart, but the beauty of
their divisional system means they do not have to stew for a year to have
another dig at their maroon and white nemeses, but get another crack at
them on Sunday week in the league semi-final in Cullion.
Mullingar knew on the way down how tough this game was going to be as
Tullow needed a result to pip Clondalkin for the last semi-final place, but
lordy, was this game hell in a hand basket, and the casualty count and
number of walking wounded bore fair testament to this.
Taking a leaf from the murder book of Lions and Ireland flanker and
touchline prowler Sean OâBrien, Tullow tackled like their lives depended on
it and this, coupled with the completion jitters brought by Mullingar,
meant the uphill struggle was made quite the bit steeper.
Tullow came to the game like dervishes and were 3-0 up in the first five
minutes, and looked like they were the only team on the paddock in the
opening exchanges.
However, with Crosby, Rattigan, Layde and Boland on hard yard duty
Mullingar began to consolidate, if not shine.
It took 25 minutes for Mullingar to put something meaningful together,
when skipper Crilly put a speculative kick in behind for the speedy Burke
to chase. She showed strong hands to take it and looked like she could have
gone the distance only to be hauled down with a high tackle.
This was as threatening as Mullingar got in the first half, and though
their defence was adequate, they have more game but just didnât seem to
have brought it.
Still, it was just the single score that separated them at the break, and
Davy Miller could exercise his waggy finger in front of a collection of
hung heads.
Maybe it was now having the breeze behind them, or maybe Millerâs
mellifluousness, but somehow the Heifers finally turned up for the second
half to give their hosts a taste of their own medicine.
Within four minutes they got Louise Kelly loose on the right wing, and
though caught, the following rumble posse won Mullingar their first
kickable penalty which unfortunately did not trouble the refâs pencil.
With a mind to stay up there, Mullingar kept the pressure up through
stirling work from Layde and Boland in what was now resembling an
attritional war.
Both Katie Layde and Sinead Holmes sacrificed their faces on the altar of
effort in a bid to keep their team in the hunt and in the Tullow 22
Seven minutes in Tullow attempted a clearance to touch which was expertly
gathered by the sure paws of Teenie Burke, and she set off down the wing
only to be viciously clotheslined into touch.
Showing a flash of her glorious kryptonite even before the ref had whistled
in her favour, Burke rose with her dragon nostrils flared, and it took the
restraining hug of coach Miller to keep her from taking on the entire
Tullow bench. Sean OâBrien included.
This dander now affected her entire herd, and they now played like they
knew how to.
It took 20 minutes, but eventually the pressure paid off and Ellen Tait
equalised with a well-earned penalty, and the game now hung on the tightest
of tenterhooks.
Six minutes later, Tullow managed to get into the Mullingar 22 for the
first time in the second half, and disasterously, won a kickable penalty
which they slotted for the lead.
Two minutes later in what looked like the most innocuous challenge of the
day, brave hooker Adrienne Andrews was knocked unconscious and the game
stopped for 15 minutes to allow her tweety-birds evaporate.
One little bonus of the incident was that Sean OâBrien ran for the
stretcher and was standing over her when she came to. âHowaya Sean, at
least I recognise you,â she says, with a twinkle and all around exhaled.
Mullingar came back to the remaining 12 minutes of the match with a greater
fire, and knowing the Tullow defence would be nigh impossible to breach,
went for the kickânâchase in behind.
On three occasions â twice with Louise and once with Teenie â the try line
looked like it was breached only for them to be pipped in the chases by
accursed maroon and white shirts.
Try as they might they couldnât breach the proud Tullow line, and as a
subsequence, conceded the Leinster Division 1 title to Edenderry.
As referred to earlier, Their season is not yet over, as they get another
crack at Tullow in the league semi-final on Sunday, March 8, with the
winner to play Edenderry for the silverware in Donnybrook on March 28.
Other news
The 1st XV are not out again until also March 8, in a double-header with
the women, however actual fun and games will be held in the clubhouse this
Friday evening from 8pm with the hosting of the clubâs second comedy night.
Tickets are 15 euro (students 10), and are available on the door.