J3'S DOMINATE TO TAKE ANDERSON CUP TITLE IN SOME STYLE 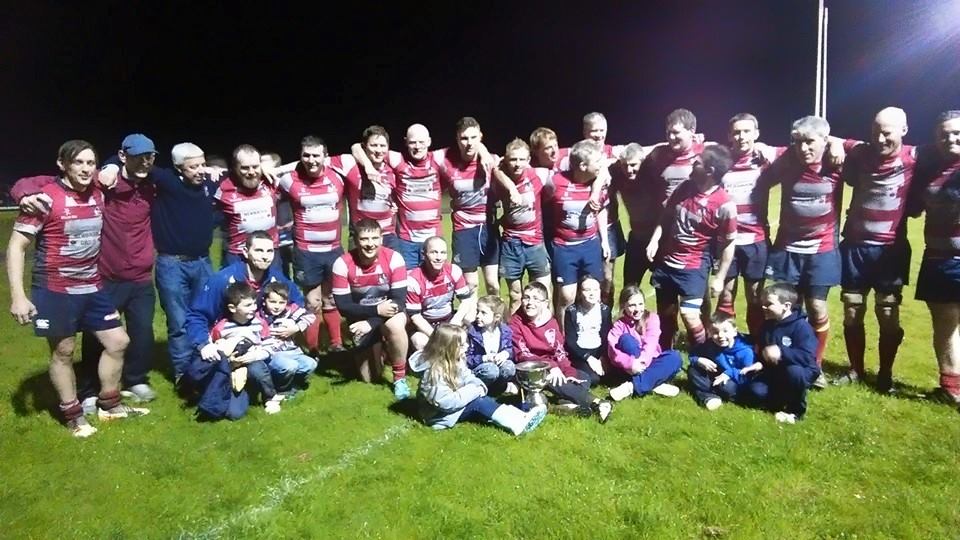 A feast of rugby was served up by Ray Murphy and his team on Friday evening at Shay Murtagh Park, Cullion to kick start a wonderful weekend for the club in mighty style. With no less than six past club captains in the team, and an average age in their high thirties; they displayed all the rugby knowledge needed to take a deserved Cup Final victory and deliver a highly entertaining evening for those lucky enough to have attended.

Mullingar started very well. For the first five minutes they barged into the Naas team with intent, but very good tackling from Naas set the tone for a physically bruising contest. Then good work across the backline presented Alan Mangan with an overlap, he passed to Peter Hall who offloaded to Brian Murphy who just squeezed in for a try in the left corner six minutes into the game. Roger OâCallaghan struck the conversion well but it drifted just wide.

Naas responded and were awarded a penalty which was converted to narrow the lead to two points and the score remained 5 â 3 for the next 25 minutes. Naas had a younger back line who looked to create space, but there was no way through the strong Mullingar defence with big hits from Swanson, OâCallaghan, Gibson and Deering in particular. Brian Murphy gave a master class in kicking for ground which pushed the Naas back three deeper. David Miller showed some real pace and made considerable ground to clear Naas pressure, but neither side could break through strong defence.

Then Naas were awarded a scrum about ten yards out and the front row of Clogher, Martin and Farrell managed to win the ball against the head. Ray murphy broke from the scrum and charged through the Naas defence to score a try which OâCallaghan converted to leave the score at 12-3. To make it better, some good hands gave Miller the extra yard he needed, and he streaked over in injury time in the right corner to stretch the half time lead to 17-3.

The talk at half time was all about getting the next score and Mullingar started the second half very well. Young Sean Ennis replaced Hewitt. Alan Kelly took a good pass from Deering and broke from outhalf with a step and feint to make serious ground and found the supporting Murphy on a great line to canter in from the 25. With OâCallaghan adding the extras, the lead was 24 â 3 with five minutes gone.

But Naas were not dead and buried and began a long ten minutes of possession and territory.  Strong defence held out, but a penalty was conceded from a very kickable position but was missed. Then the Naas outhalf dropped a goal to bring it back to 24 -6 ten minutes into the half. Despite one supreme run from their captain, Mullingar were being outplayed and Naas then put everything they had into attack. They ran the ball left, then back to a strong maul in the centre and when they released the ball left, Mullingar simply had insufficient numbers in defence and Naas scored a simple overlap try. The conversion made it 24-13. With the lead narrowed. Mullingar rolled up the sleeves and decided to take the ball on in the forwards. Farrell and Pearson led the way and then a maul got trundling and made fully twenty five yards before leading to yet another Ray Murphy try from close in for his hat trick and the score that left the lead at 31 â 13 after an excellent OâCallaghan conversion. Team Coach Andy Yeoman made a series of changes with Sinnott for Deering (who returned but was then yellow carded), Jimmy Geoghegan for Martin, Alan Keena for Clogher (who became a Dad on Wednesday!) and Gerry Daly for Alan Mangan. The game was up and Mullingar now looked threatening every time they attacked. Kelly made space yet again, and sent Brian Murphy galloping through the Naas defence for his second of the night to stretch the lead to 36-13 with ten minutes to go. David Miller nearly touched down with Brian Murphy outside him on the right, but when the ball was worked left, Gerry Daly was able to get over and add a bit of gloss for the final score of 41-13.

This was a wonderful evening as the âold headsâ produced a really great team effort. Very few if any tackles were missed, and many were big hits. The bodies were put on the line and an Anderson Cup was won in style with seven tries, and all well scored from good rugby. Well done all.