IT'S EARLY DAY'S, NEVERTHELESS MULLINGAR GO TOP OF THE TABLE 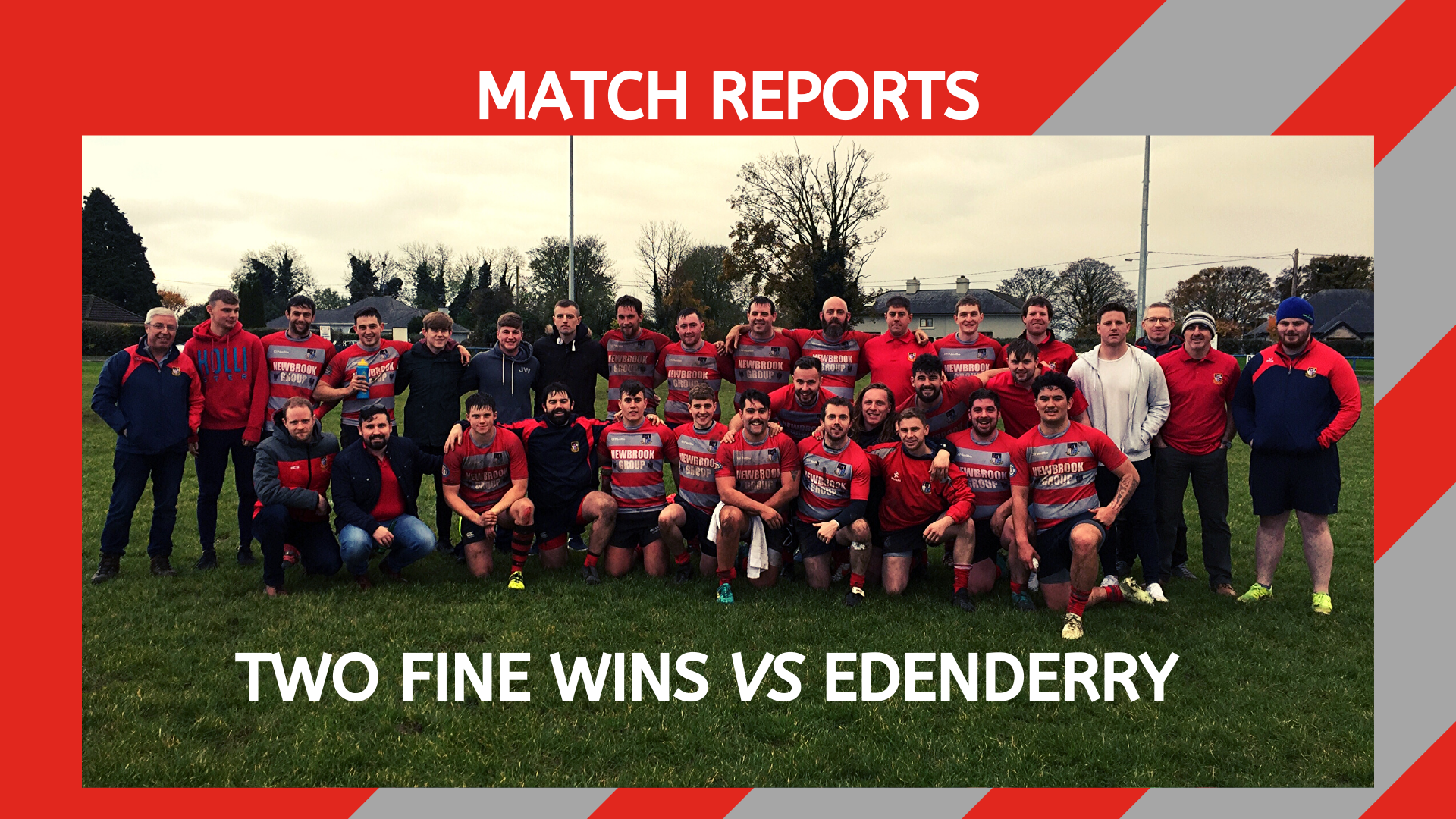 Mullingar moved into first place of Division 2A of the Leinster League with an eight try win away to Edenderry.  The weather just held on a damp Sunday afternoon so it was a good playing surface and Mullingar played some fine running rugby throughout. Results elsewhere mean that Mullingar face the next two matches against strong opposition in Newbridge (away) and Coolmine (home) which will tell a lot about how this tightly fought division will finish at the end of the season. With 4 wins from 5, only point difference separates Coolmine from Mullingar.

Mullingar started well and created a 12 point lead from good structured rugby in the first quarter. Arthur Brabazon looked the part with zippy distribution from good quality possession. The scrums were solid and control in the lineouts meant that Mullingar created good initial possession. Then phases were developed well with Mitchell Miller and Donal McGovern bringing the ball forward and releasing the outside backs at the right time.

After 6 minutes, phases right and then left created space for David Lynam to crash over for a five point lead. Further Mullingar pressure led to a Lemeki Vaipula try at the posts after good passing from Brabazon, which was converted by Miller. Brabazon, although playing especially well, was replaced by Thomas Campbell as he was injured. Then heading into the third quarter, Mullingar had a lineout close to the line, and Brian Reidy worked the space for Aleksa Mitic to get over the line in the left corner for the teams third try and a 19 nil lead following an excellent Miller conversion.

Edenderry for their part, carried the ball with purpose, but were met with staunch defence. The home team had their purple patch and coach Eric Miller saw his forwards run through phases for an unconverted try just before half time to leave the half time score a deserved 19 5 lead for the visitors.

Eoghan Moore played at outside centre and his pace and eye for a gap caused plenty of trouble for the Edenderry defence. With good possession continuing, strong scrummaging from Fox and Moran, great support play from captain on the day Daryl Quinn and big hits from Maxwell and Vaipula; Mullingar imposed their game throughout the third quarter.  Good attacking play saw Edenderry pressed and Miller saw a gap close to the line to touch down for the bonus point try, which he duly converted to make it 25 – 5 on 47 minutes.

This prompted Edenderry to apply considerable pressure and they again looked to build phases close to Mullingars line. However, strong Mullingar defence caused a knock on which was gathered well by Sean Rock. The young full back saw space and supporting players to his right and he took off from close to his own line. He released Moore in the Mullingar 22 and the speedster raced through the slightest of gaps to sprint all the way to the line. It was a hard score for Edenderry to take and pushed the score to 31 5.

Killian McNay had replaced the injured Vaipula, with Geraghty moving to number 8, and it was NcNay who added the next try, converted by Miller to make it 38 – 5 as we entered the third quarter. Kevin Smith replaced Chris Fox, who had a huge shift against the big Edenderry pack in the absence of club captain Brady. Cathal Burke replaced Rock and Cormac Dunne came on to close out the game. Miller raced away along the left flank, choosing his line from a good pass and he nearly outpaced the defence but somehow lost balance as the line approached. Lynam supported well but could not hold the offload from the prone Miller.

However, this was only a precursor to the next score, as Lynam scored his second try of the game with five minutes remaining making it 43 – 5. Then on the stroke of full time, Moore made another dash from deep in Mullingar territory. This time the cover managed to haul him down, but a good offload saw Geraghty clear to race fully 30 yards to get the last try. Miller converted well to make the final score 50 points to 5. As it turns out with unexpected results elsewhere; Mullingar now top the division after 5 games played.  Well done to all concerned.

Mullingar came out winners in a tight encounter against local rivals away to Edenderry on Sunday. Edenderry started the brighter and with the hill advantage on a heavy pitch, dominated the first 20 minutes of the game. Their domination paid off with Mullingar not protecting the side of a ruck and the Edenderry scrumhalf picked up and nipped in under the posts for the opening score to go 7-0 up. Mullingar began to fight back, but a few errors and wrong decisions kept Mullingar in their own half for long periods. Edenderry were next to score and with a 12-0 lead were looking good to dominate through their forwards. However Mullingar began to get a foothold and with Edenderry giving away a number of penalties at the breakdown, it was inevitable that the referee would issue a yellow to one of the home side after one too many penalties. 10 minutes before half time Mullingar had a penalty kick to get them off the mark. The kick hit one of the posts and came back, however Craig Swanson`s experience had him following the kick and he gathered the rebound and raced in for Mullingar`s opening try, which was not converted. The score remained at 12-5 till half time. Shortly after scoring Craig went off injured to be ably replaced by Shane Raleigh

Mullingar started the second half a lot better than they did the first half and put a lot of pressure on the Edenderry defence. A second Mullingar try came from Bobby Gonoud after a lot of good play from the Mullingar forwards. The try went unconverted but now the pressure was on the home side with the score at 12-10. A bit of sloppy play by Mullingar allowed another Edenderry try, which looked an easy conversion. Fortunately for Mullingar the conversion was missed, but the home side now lead 17-10. Mullingar upped their game and spread the ball a bit faster and began to run more at the Edenderry back and made a lot of ground. Another few infringements by Edenderry resulted in another yellow card to the home side. From a penalty about 25m from the Edenderry line Alan Naughton ran hard at Edenderry and broke a few tackles to score under the posts. The try was converted to now level the scores at 17-17. Now heading into the last 10 minutes of the game Mullingar did a lot of work to try and achieve the winning score and it eventually came with a try in the last minute of play by Arron Glennon to put Mullingar 22-17 ahead. The conversion was missed but it didn’t matter at that stage. To come away from Edenderry with a win from a very tight and hard fought game was a good lift for the Mullingar side.

Next match is away v Newbridge