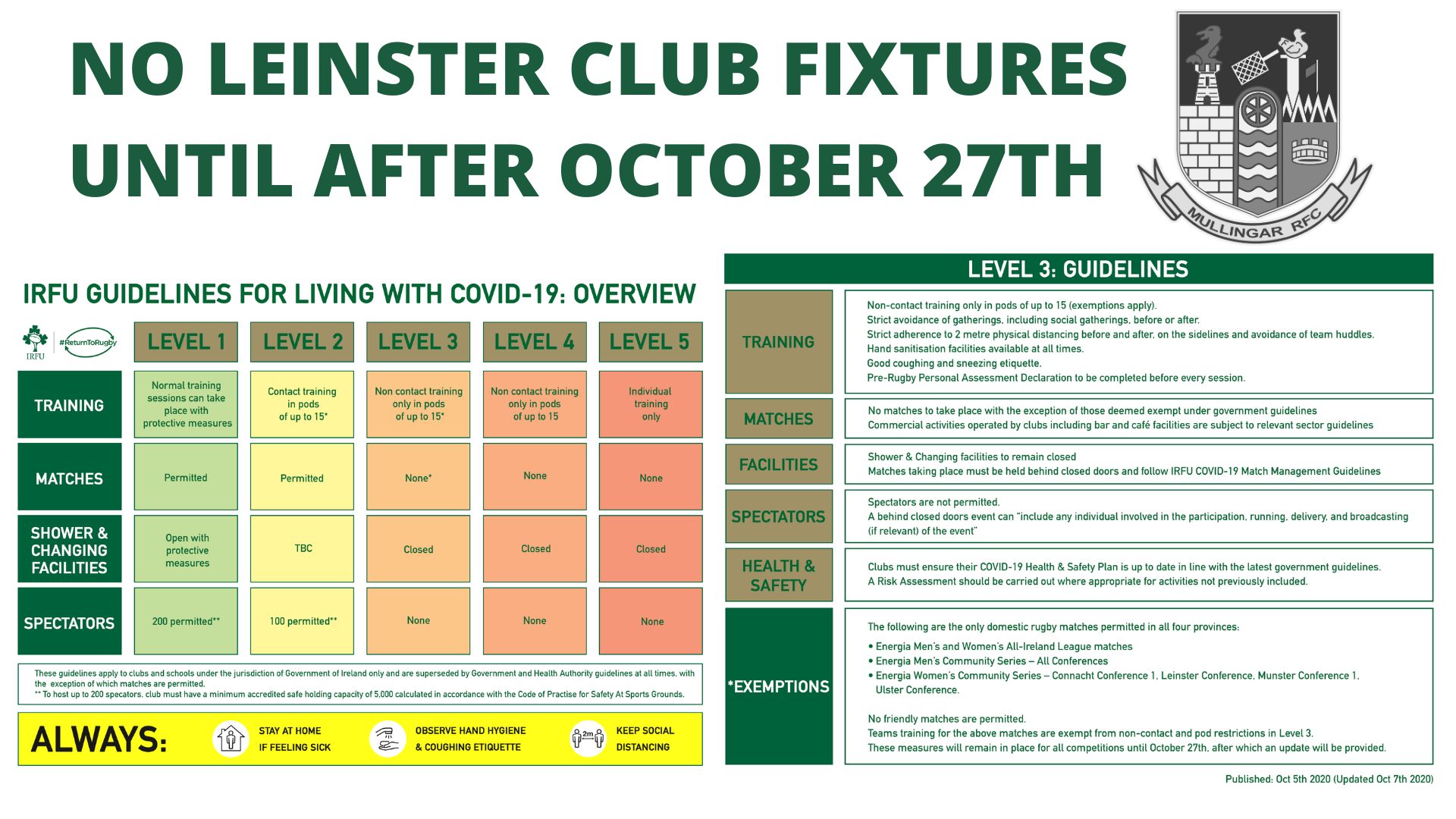 "The Leinster Rugby Competitions Committee met this afternoon in the wake of the IRFU decision outlined below, and will be meeting again over the coming days to formulate a revised plan and schedule for club rugby after 27th October"

So, just to reiterate there will be no Leinster Branch club rugby until after 27th October

The IRFU Rugby Committee have voted unanimously to reduce the number of games permitted in all four provinces.

The decision has been made based on the latest medical, public health and government advice where appropriate from the Government of Ireland and the Northern Ireland Executive.

The following are the only domestic rugby matches permitted in all four provinces.

The Energia Community Series was first announced in July as a competition to allow senior adult clubs play only localised games as a means of mitigating the possible transmission of COVID-19.

No other adult or underage fixtures including competitive and friendly matches are permitted.

Rugby training at all levels of the game may continue with protective measures in place, as per government guidelines.

The committee wish to clarify that the following matches are also no longer permitted in Level 3.

These measures will remain in place for all competitions until October 27th, after which an update will be provided.

“I want to recognise the huge amount of work undertaken to bring about the return of grass roots rugby in all four provinces.

“All clubs remain open for training and their role as a hub for health and wellbeing has perhaps never been more important. It’s also important we keep amateur rugby to the fore and the Energia Community Series will continue as a modified version of the All-Ireland League.

“The fact remains that COVID-19 is still with us in the wider community and the government message is clear – we need to reduce travel and reduce our contacts. For rugby, reducing the amount of games is a disappointing but necessary way of doing this.

“Finally, I’d like to thank your club for playing its part in keeping us all safe. Please continue to demonstrate the safe behaviours that allowed rugby to return this year and ensure your COVID-19 Health & Safety Plan is up to date.“

We will announce OUR REVISED TRAINING SCHEDULE for a return to pod training this week and Saturday for Youths and Minis shortly.