MULLINGAR'S RETURN TO DIVISION 1B SHOWS PROMISE DESPITE DEFEAT 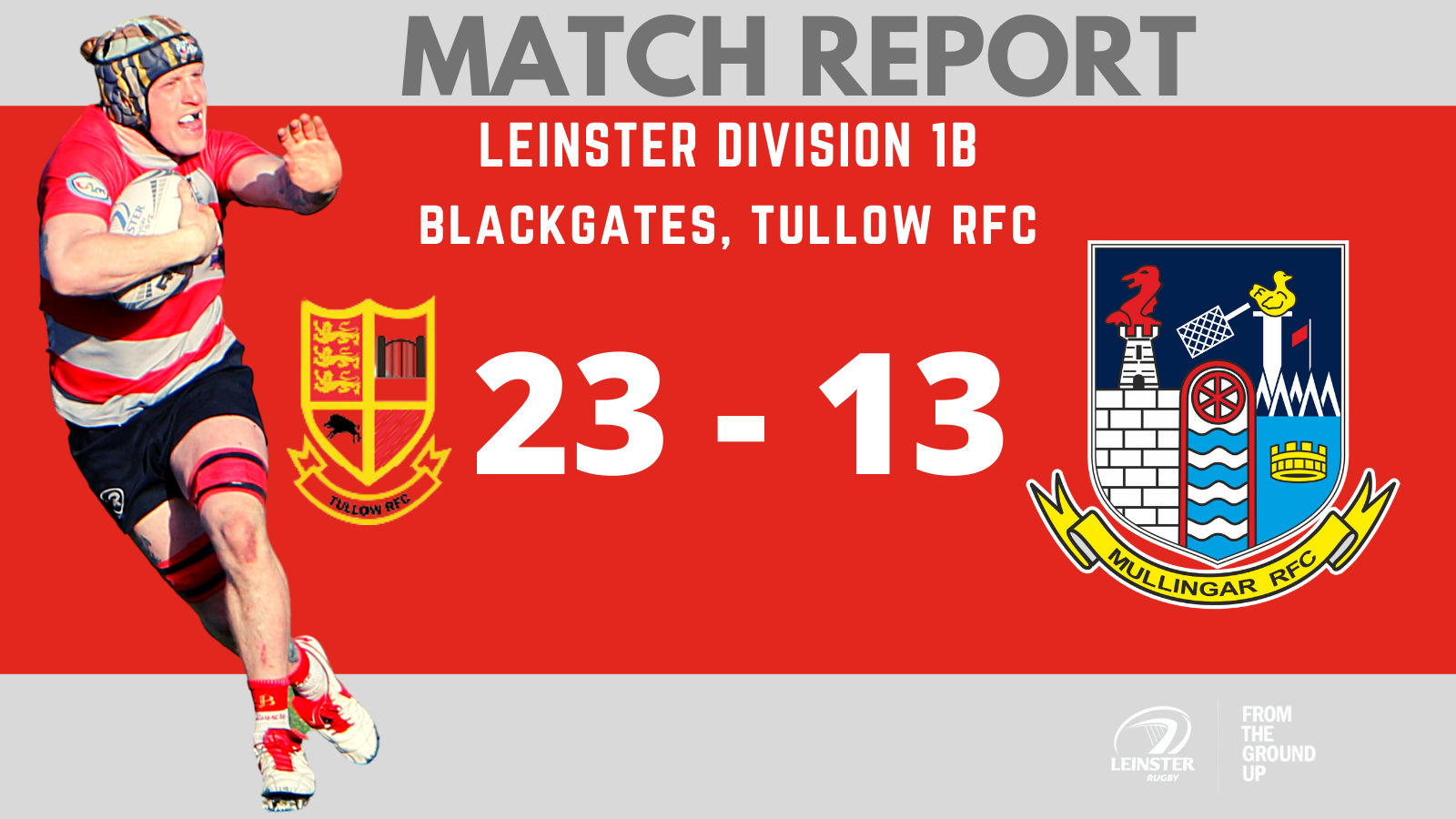 After a false start last year due to Covid restrictions, Mullingar got a do-over as they started their Leinster League campaign away to Tullow. Mullingar retained much of the squad from their promotion winning season in 2019/20, the only notable loss was outhalf Mitchell Millar who is now playing in Australia on the fringes of professional team Western Force however Mullingar were also missing club stalwart Daryl Quinn with an long term injury.

The game was played on Tullow’s new artificial pitch and the weather conditions were warm and sunny, perfect for some running rugby and Mullingar made the most of the conditions in the early stage of the game. Some slick passing found Eoghan Moore in space who showed plenty of pace and strength and at one stage it looked like he might go the whole way to the try line but some scramble defence from Tullow stopped him short but they were under pressure and conceded a penalty which Stuart Flynn kicked to give Mullingar a 3-0 lead. From the kick off Mullingar conceded a penalty which Tullow kicked to the corner and from the ensuing play Mullingar conceded another penalty which Tullow kicked to level up the score.

Mullingar kicked off again and Tullow exited well to force Mullingar back into their half and another penalty allowed Tullow to take the lead 6-3. Several minutes later Tullow made use of the new 50-22 rule to establish field position in the Mullingar 22 and despite tough defending from Mullingar, Tullow eventually crashed over to make the score 13-3. An injury to the influential Tullow number 8 allowed Mullingar to take control of the game and they earned another kickable penalty which unfortunately came back off the upright. An injury to prop Jonathan Moran forced him to withdraw from the match to be replaced by Chris Fox. However, Mullingar continued to exert pressure and Alan Brabazon made a burst for the line but unfortunately the referee got in the way. From the resulting scrum the referee awarded Tullow a free kick for a crooked feed into the scrum which seemed a very tough call. Tullow kicked the ball dead and the referee brought the half to a conclusion.

Shortly after half time, the Tullow second row found a gap in midfield and scored under the post for a try that seemed to surprise even the Tullow second row. An injury to captain, Darren Brady, forced him to withdraw with brought Alex Mitic into the game and forced starting hooker, Kevin Smith, to tighthead prop which unbalanced the Mullingar scrum and Tullow capitalised by forcing a number of scrum penalties. It look bleak at the stage for Mullingar but there is a strong team spirit in the Mullingar squad and a big hit from Paul Maxwell on the Tullow outhalf gave the Mullingar men the lift to go looking from something from the game. They upped the intensity of their play and took the game to Tullow and with 20 minutes to go they earned a kickable penalty and despite shouts to kick to the corner the leaders in the squad did not panic and Stuart Flynn kicked the penalty to make the score 20-6.

Luke Finegan entered the fray in place of Conor Glennon and TC Campbell replaced Arthur Brabazon as Mullingar increased the pressure, a fine clearing kick from Stuart Flynn in the Mullingar 22 brought play to the Tullow 22 and from the resulting field position Mullingar managed to force a turnover and Alan Brabazon showed all his class to dot down under the posts. Stuart Flynn added the 2 points to make the score 20-13. Mullingar sensed the game was there for the taking but Tullow, winners of the Towns Cup in recent years, showed all their experience to slow the game down and force Mullingar to play from their own half. Eventually, desperate to regain possession of the ball, Mullingar conceded a penalty which the Tullow out-half slotted to make the final score 23-13 and deny Mullingar a losing bonus point.

Overall this was a game that Mullingar definitely deserved something from and will give them focus as they Carlow next week at home at 3.00pm.