U14 GIRLS WIN THE CUP AND U13 BOYS ACCOMPLISH UNIQUE DOUBLE 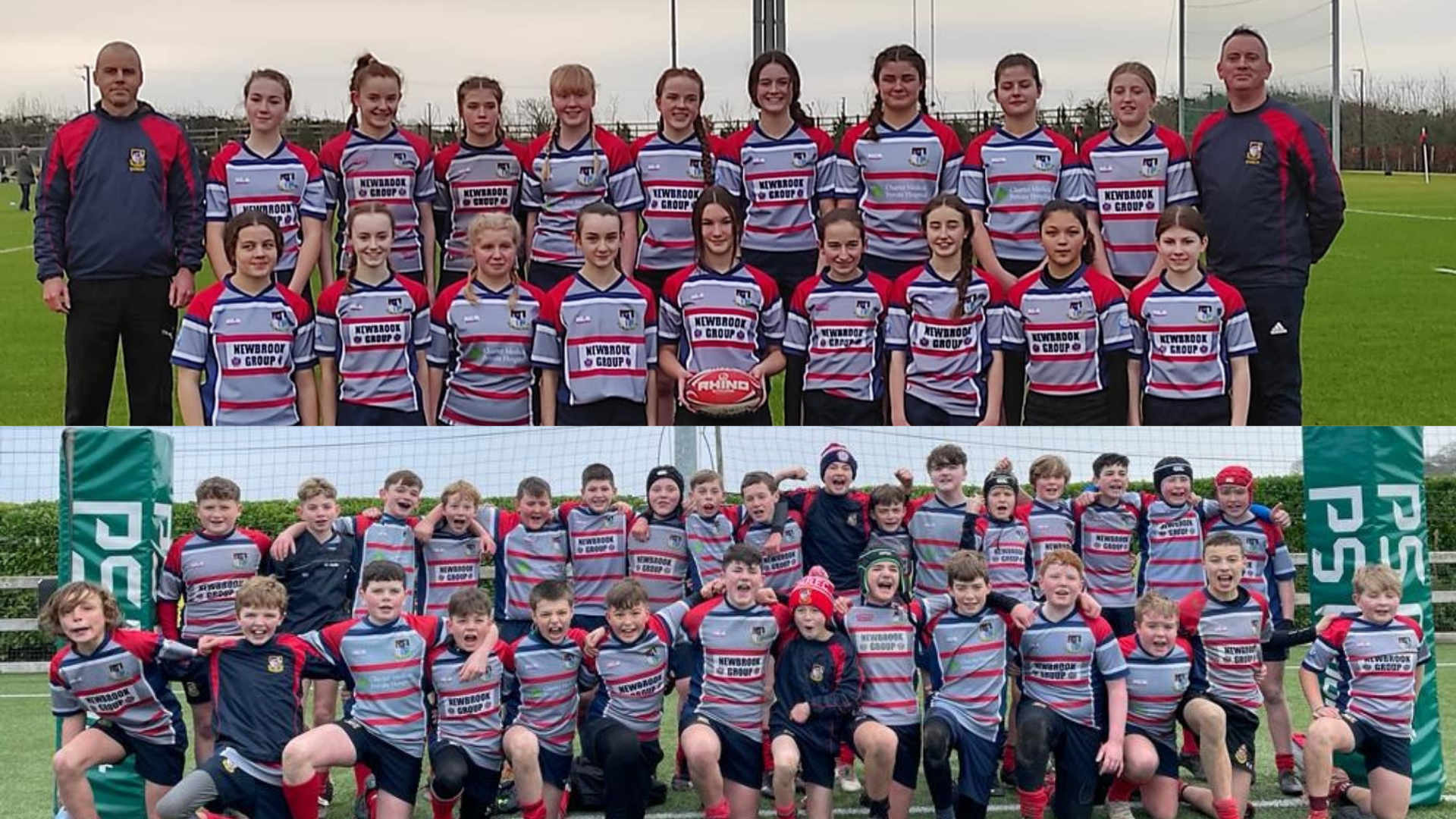 Mullingar under 14s Girls (blue squad) brought home MRFCs first major piece of silverware of the season on Saturday morning. Carlow IT was the splendid venue for the Leinster under 14, 16 and 18 girls cup and plate finals. In what’s been a tough few week for women’s rugby in Ireland it was heartening to see hundreds of supporters and 12 fully committed teams of girls playing some great rugby on the day.

Mullingar’s route to the final included a first-round bye then strong victories over Dundalk, Greystones and Barnhall in the semi final. In the final the girls were facing the Sharks, a team from Dublin made up of players from 3 big senior rugby clubs: Terenure, Suttonians and Old Belvedere. It’s testament to the strength and hard work being put into the development of girl’s rugby in Mullingar that while many clubs need to amalgamate with neighbours to field underage girls teams our cup winning blue squad is one of two under 14 teams being fielded by Mullingar this season.

Conditions in Carlow on a crisp winter’s morning were perfect for the open running rugby the girls love to play. After a nervy opening 5 minutes which saw a couple of uncharacteristic handing errors Mullingar soon settled into the rhythm they planned and trained for. Quick ball from scrum half Cliona McGinley and strong carries in tight began to wear down the sharks defence and gaps soon appeared. Orlagh O’Brien was first to capitalise on a spilled ball, then sprinting through to open the scoring and settle the nerves of the large Mullingar support in attendance.

Five minutes later Mullingar were back in possession and working through the phases again, a flowing move out wide saw speedster Ruby Kelly get round her opposing winger and fly in under the posts.

A feature of Mullingar play at this point was the hard work from the pack, aggressive clear out at the ruck with players willing to make themselves available to make the hard yards with ball in hand. Katie McGrath, Eabha O’Mahoney and Muireann Foy were relentless up front. When the Sharks could get some possession Mullingar’s defence continually pinned them back with Cait Clerk and Millie Corrigan tigerish all day in the tackle.

The hard running Charlotte Butler -Clyne was next to cross the whitewash. Working her way through the Sharks fringe defence and powering through a gap that didn’t look open, to score Mullingar’s third.

Shortly after another period of sustained pressure saw Mullingar again build the phases. With Grainne Cleary deftly pulling all the strings at outhalf. O’Brien was put through for her second try of the day. With centre partnership Orla Rijsken and Caitlin Bastic continually creating time, space and delivering the key pass to release players outside them it wasn’t long till Jayne Charles got in on the scoring act, running one of her trademark lines off her captains shoulder to split the sharks defence wide open and score again under the posts.

Unfortunately for the Sharks Mullingar’s finishers came on at half time and were in no mood for taking the foot of their throat! Caoimhe Burke and Abigal Molloy stepped up the intensity and work rate and Mullingar seemed to find another gear. Butler- Clyne powered through for her second before McGinley sniped through following great work from Orla Collins and Anne Reynolds.

Jessica Briody came on at scrum half and again Mullingar seemed to up the tempo, working the ball left and right building phases before releasing strike runners and keeping the score board ticking over. Orlagh O’Brien was soon barrelling over for her hat-trick. Then Briody fielded the resulting restart and accelerated through a small gap in the sharks defence to run the ball straight back under the posts and score Mullingar’s 9th. Rijsken converted to take her tally for the day to five conversions with Cleary chipping one in too.

An uncharacteristic period of indiscipline allowed the Sharks work their way into Mullingar territory for the first time in the second half and dot down for a roundly applauded second try of the game. True to form the Sharks try only seemed to annoy the Mullingar girls who flew back into attack in the closing minutes. Collins was at the end of a well worked move to get a well deserved try and close out the scoring.

The final whistle sounded, and the celebrations began. A hugely impressive 69 – 12 win for Mullingar. In her victory speech Cleary thanked the opposition, the officials and paid a special tribute to her own teammates and the special bond they have. The nucleus of the team have been together since they formed Mullingar’s first under 8 girls squad seven years ago and have been superbly coached all the way up by Mark Corrigan and Willie Bastic.

After the match the sharks team coach commented on the exceptionally high bar being set by this group of Mullingar players and while very disappointed for their own girls they were in awe of the standard of rugby they had come up against. If this group can stay together and continue to work as hard as they have done over the last few months expect to see them take home many more honours in the seasons ahead.

Following on from Saturday's momentous U14 Girls Leinster Cup Title, our U13 Boys Squads completed a unique double, both finishing undefeated and in position one and two in this year`s Midland League competition with nothing but the colour blue or red between them. This is a fantastic and wonderful reflection of the Youths section within our Club. Our congratulations to all our boys, coaches and parents involved in this incredible accomplishment.