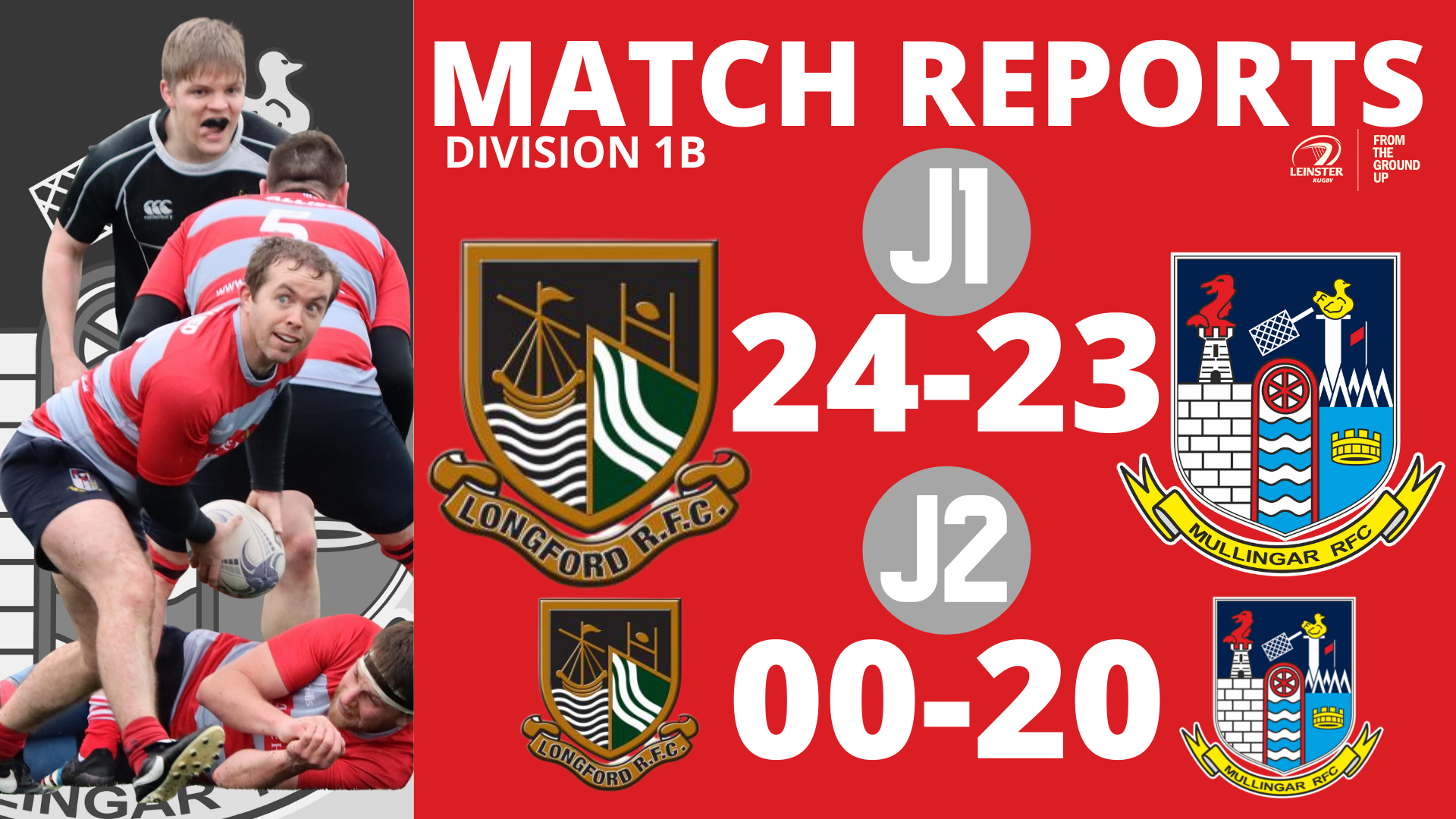 After last week`s good win, we had the local derby away to Longford and the matter of vital league points and position at stake. It was always going to be a tight affair as was the game in Mullingar last November which we won 25-11. Last Sundays game turned out to be a much closer game but this time Longford prevailed by the slenderest margin. Mullingar have been on the losing side in 4 very tight games by a total of 9(4,2,2,1) points and on the winning side in 2 tight games by 4 and 1 points. Very tight margins indeed and hopefully after next Sundays last league game, we won`t be regretting not having kept ahead in one of those games.

Sunday`s game wad a hectic start with both sides scoring a try each, Longford going into the lead with a converted try. Mullingar`s replied with a try coming from Conal Fagan, after a penalty was kicked to the corner and Mullingar mauled over the line, with Longford`s lead cut to 7-5. A second Longford try came in the 15th minute after a long period of pressure in the Mullingar 22. Mullingar responded with some good attacking play which yielded a penalty scored by Stuart Flynn to reduce Longford`s lead to 14-8. More Mullingar pressure reduced the lead to just 3 points with another Stuart Flynn penalty to leave Longford 14-11 which remained until half time.

The home side again stretched their lead again with another try to go 21-11 ahead. Mullingar fought hard to get back on to the score board and with 15 minutes left sustained pressure from Mullingar resulted in a try by Daryl Quinn converted by Stuart Flynn and a yellow card to Longford for repeated infringements. At 3 points behind Mullingar fought hard for territory and were unlucky not to score another try as the ball was knocked on after a number of pick and goes on the Longford line. With 6 minutes left the pressure told on Longford as Mullingar got in for a try in the corned scored by James Kerrigan to go ahead by 2 points as the conversion was missed. So with 6 minutes left and Longford restored to 15 players it was still all to fight for. Mullingar gave away a penalty while attacking just outside the Longford 22 and from this Longford managed to get into the Mullingar 22 and after a number of plays, Mullingar seemed to be holding out only to concede a penalty just on the stroke of full time. Longford duly kicked the penalty and garnered the 4 match points, with Mullingar getting 1 losing bonus point. With Tullow winning away to Carlow yesterday, they move above us in the table, while we stay ahead of Longford by 2 points. Mullingar are away to 2nd placed Wicklow next Sunday, with Wicklow still in contention to win the league should Boyne lose. Longford are away to Cill Dara next Sunday. While Clondalkin are relegated, the team finishing 2nd last will go into a playoff with the team finishing 2nd in the league below and hopefully we will stay out of that position.

Mullingar seconds travelled to Longford with the aim of achieving a double victory over our local rivals and maintaining 2nd place in Leinster2nd league. They achieved both of those aims and kept a clean sheet in the process. While Mullingar had a comfortable win it was not an easy one and they had to fight hard for all of their points. The game was played on Longford`s lower pitch which was quite heavy going and suited the Longford pack more. While Mullingar had most of the possession in the opening period, Longford tackling kept them at bay and it wasn’t until the 15 minute when a penalty from Ross Tormey opened the scoring. Mullingar maintained pressure and in the 25th minute a strong run by Darragh Lambe from between half way and the 22, broke through several Longford tackles to score the opening try. It was duly converted by Ross Tormey to put Mullingar 10-0 up, which remained until half time.

The second half had Mullingar again enjoying most of the possession and territory, but with the heavy going, a greasy ball, a number of passes were knocked on. Another factor was the pitch being narrowed by 5metres due to ongoing renovations on the pitch, kept it all a bit tighter. However Mullingar got a 2nd try in the 15th minute of the2wnd half after Luke Finnegan pounced on a Longford error just short of their line to score and put Mullingar 15-0 up.

Mullingar kept up the pressure and in the last play of the game Luke Finnegan the 3rd try and Mullingar ended up 20-0 winners. Special mention to Sean Cronin who stood in to the outhalf position, having never played or practiced there and acquitted himself well for the 80 minutes