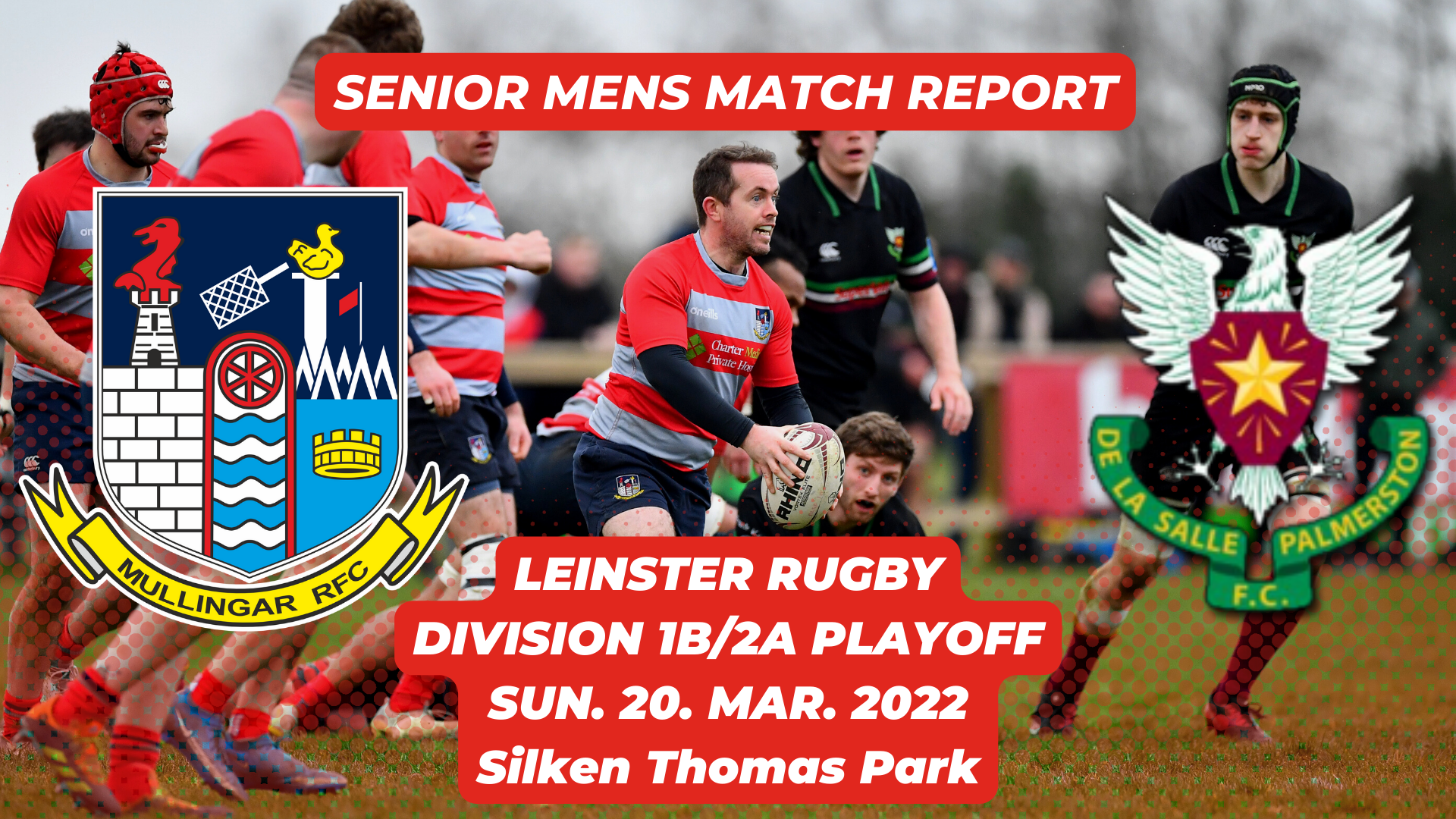 The last time Mullingar played a De La sale team was in the 2016 Harry Gale cup Final (U20s) and that time Mullingar overwhelmed the Dublin side. On Sunday facing into this game with Mullingar having had 2 hard games on the last two Sundays and a number of player out injured, the feeling was that this would be a close game and so it transpired for most of the game but with Mullingar pulling away as it came to the final 10 minutes. Maybe the hard fought wins in the last two weeks had made Mullingar a little more battle hardened for a vital game and indeed it was remarked on by a De La Salle coach after the game that it was Mullingar`s physicality that they could not match. De La Salle started the game in very determined mood and from the start attacked Mullingar as if they wanted to get the game over as quickly as possible. In the 7th minute De La Salle broke through Mullingar`s defence and scored a try which was converted to give them a 7-0 lead. Mullingar were on the defence for most of the first 20 minutes and spent most of that time in their own half. However the De La Salle lead was reduced by a penalty in the 20th minute by Sean Rock. The Mullingar backline of Stuart Flynn at outhalf was able assisted by Anto McGivney and Alan Brabazon, who was playing his first game since December last and it didn’t look like he had been away at all as he fitted back into his normal 12 jersey seamlessly. Both of the wings Aaron Glennon and Eoghan Moore had more to do as the good pitch and dry conditions made it easier to move the ball and with De La Salle kicking for territory quite a lot in the game both wingers and full back Sean Rock saw a lot more of the ball from opposition kicking than normal. It was from one of the De La Salle kicks that were dealt with properly that De La Salle increased their lead in the 25th minute from a penalty to go 10-3 up. Mullingar were starting to get more into the game through hard carries by our forwards, with the front row working very hard. It was unfortunate to lose Chris Fox to an injury in the 10 minute of the game, but he was ably replaced by Ben Glennon. In the first half De La Salle lineouts were working well and they had a couple of steals from Mullingar lineouts also as they were making use of their taller players and due to an injury in the pre match warmup Mullingar`s lifting was not as effective as it normally is. While the De La Salle lineout might have been working well it was Mullingar`s backline that was showing the more inventiveness and as the crisp service from TC at scrumhalf grew we were looking that bit more dangerous when we got good ball. However it was via the forwards that Mullingar got the next score. It came from a lineout in the 35th minute and a few drives later, Conall Fagan got over the line for his third try in 4 games. The try was not converted but with the score not at 10-8 in favour of De La Salle, it did not look so daunting for Mullingar. With the half time whistle came a chance to regroup and sort out the second half strategy.

Mullingar started the second half well and just 3 minutes in took the lead with a try from Paddy Doran, which was converted by Sean Rock to go into ahead 15-10. Mullingar`s 2nd row pairing of Daryl Quinn and Luke Finnegan together with the back row of Lemeki Viapulu, Paul Maxwell and Paddy Doran were starting to really dominate their opponents and some of the hard tackles on the De La Salle players resulted in their physio being quite active. From a kick by the De La Salle fullback in his own half into the Mullingar 22 and a lineout win, De La Salle the De La Salle out half kicked a speculative kick to the far corner and Mullingar`s in-goal area. A bit of confusion about which of the 2 Mullingar players would go for the ball allowed the De La Salle winger pounce on the ball for a try, which went unconverted to put the score now at 15-15.

However that score only galvanised Mullingar and from that point we seemed to move with greater determination and the tackles increased in intensity. Mullingar got back into the lead in the 73rd minute with a penalty from Sean Rock. When the penalty was awarded by the referee there was a minute or so of injury time as 3 De La Salle were treated for knocks. At 18-15 Mullingar didn’t try to close out the game but again went on the attack and a try by Anto McGivney put the score at 23-15. Now De La Salle needed to score twice to get back into the lead and they tried as best they could but some determined defence by Mullingar repelled any attack. In the 80 minute and the last play being called by the referee De La Salle attempted one more attack and moved the ball along the Mullingar 22. However a very alert Aaron Glennon read their intentions and intercepted to run the 80 metres to the De La Salle goalposts for Mullingar final try. A joyous celebration greeted Aaron after his try and the final play of the day was the conversion. The conversion was taken by Lemeki Viapulu to round off a 30-15 win and a good day for the Club.

Now it`s down to the Towns Cup Quarter final next Sunday against Clondalkin at home with the kick off at 3.00

(Enniscorthy go through on tries scored)