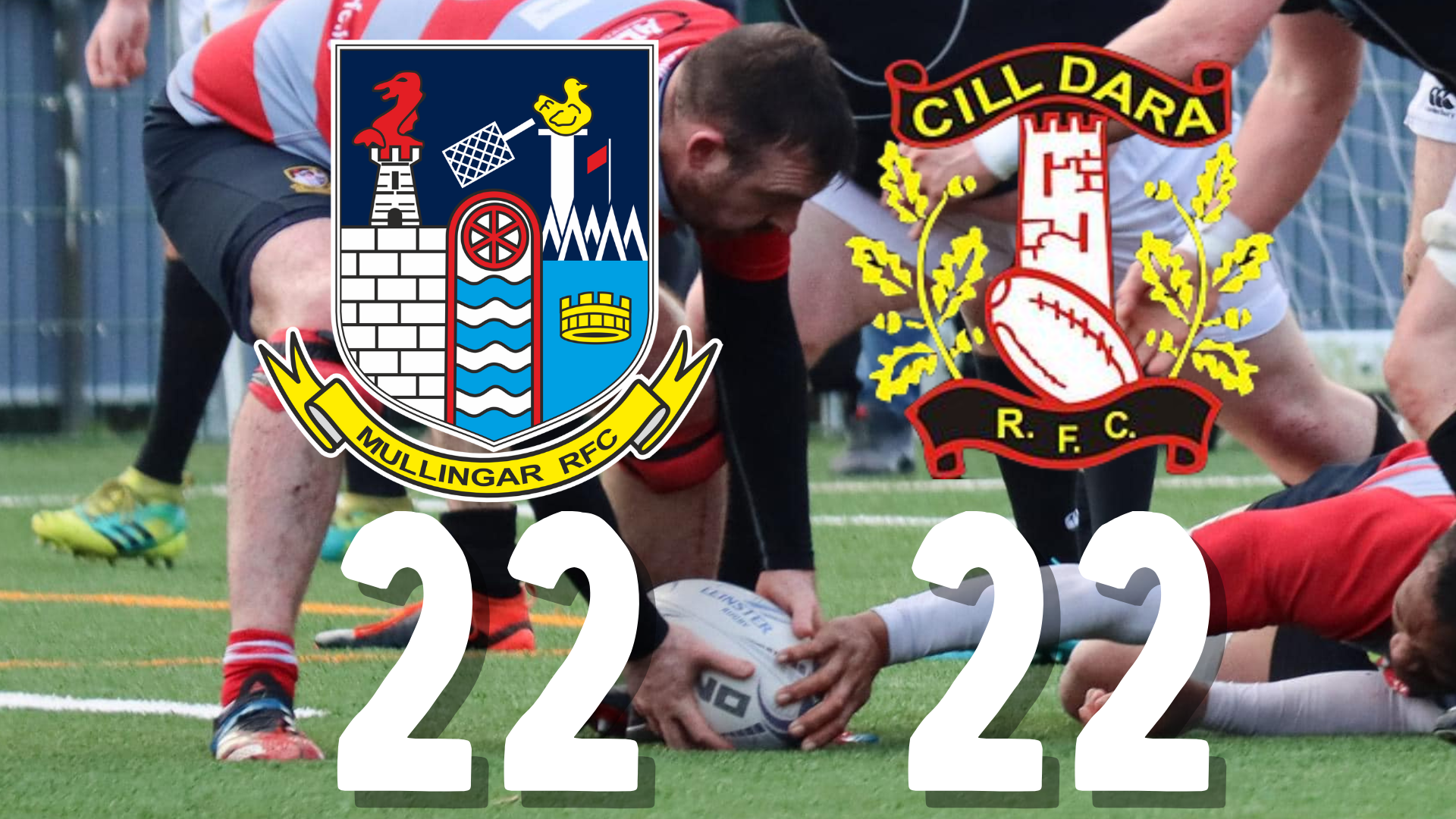 Mullingar ended this game with 3 points (Draw2 +4 try bonus), bringing their total for the last 3 games of 13 league points from a max possible of 15. Whether it was 2 points missed or 3 points gained will be debated as both sides had chances to win. Mullingar got off to a blistering start with a try by Paul Maxwell in the 3rd minute after he broke a tackle in his own half , chipped ahead and scored in the corner, the conversion being missed. In the 5th min Mullingar had a second try after good backline work and Anthony McGivney touched down again in the corner for a 10-0 lead. The next 20 minutes were scoreless with Cill Dara pressing hard but the Mullingar defence was solid. A few chances came to Mullingar but unfortunately weren`t taken. In the 27th minute there was a Yellow card for a Cill Dara player followed 3 minutes later with a Yellow card for a Mullingar player. Some good play by the visitors resulted in a try which they converted to leave the score at 10-7. However Mullingar got back on the scoreboard with a second try by Paul Maxwell, which again went unconverted to put the score at 15-7 which remained until half time. Soon after the resumption of play a deft grubber by Rangi and quick reaction by Alan Brabazon gave Mullingar a 4th try bonus point. At 22-7 it was looking good for Mullingar but a few errors crept in and Cill Dara kept up the battle for points. A penalty for the visitors reduced the score to 22-10. This penalty was followed 6 minutes later with another penalty for Cill Dara. This penalty hit the post and was knocked on by Mullingar. Failing to react quickly left a Cill Dara player coming in fast to try and touch down. He was put off with a nudge by a Mullingar player, however the referee deemed it illegal and awarded a penalty try to Cill Dara with the Mullingar player receiving a yellow card. At 22-17 the game was now up for grabs and for the next 10 minutes had an extra man. A 3rd try for Cill Dara, with the conversion missed left the score at 22-22. The final 10 minutes were frantic with both side attempting to get the additional score to get that win, however none came and the game ended in the 80th minute. A Cill Dara player unfortunately had a leg break in the final play of the day and we wish him well with the recovery.

Congratulations to our U 18s player Jack Boyan, who Captained the Ireland U18s team to beat Italy by 43-10 in Rome last Saturday. Jack was joined in the Irish team by Paidi Farrell, Darragh Brennan from Tullamore and Sam Mills on the bench from Longford. Well done and best wishes for the remaining games this season.

Leinsyer Lge U 14s Boys League; Mullingar Vs Kilkenny Away

Leinster Lg U 18s Girls League Mullingar Vs Portdara Away