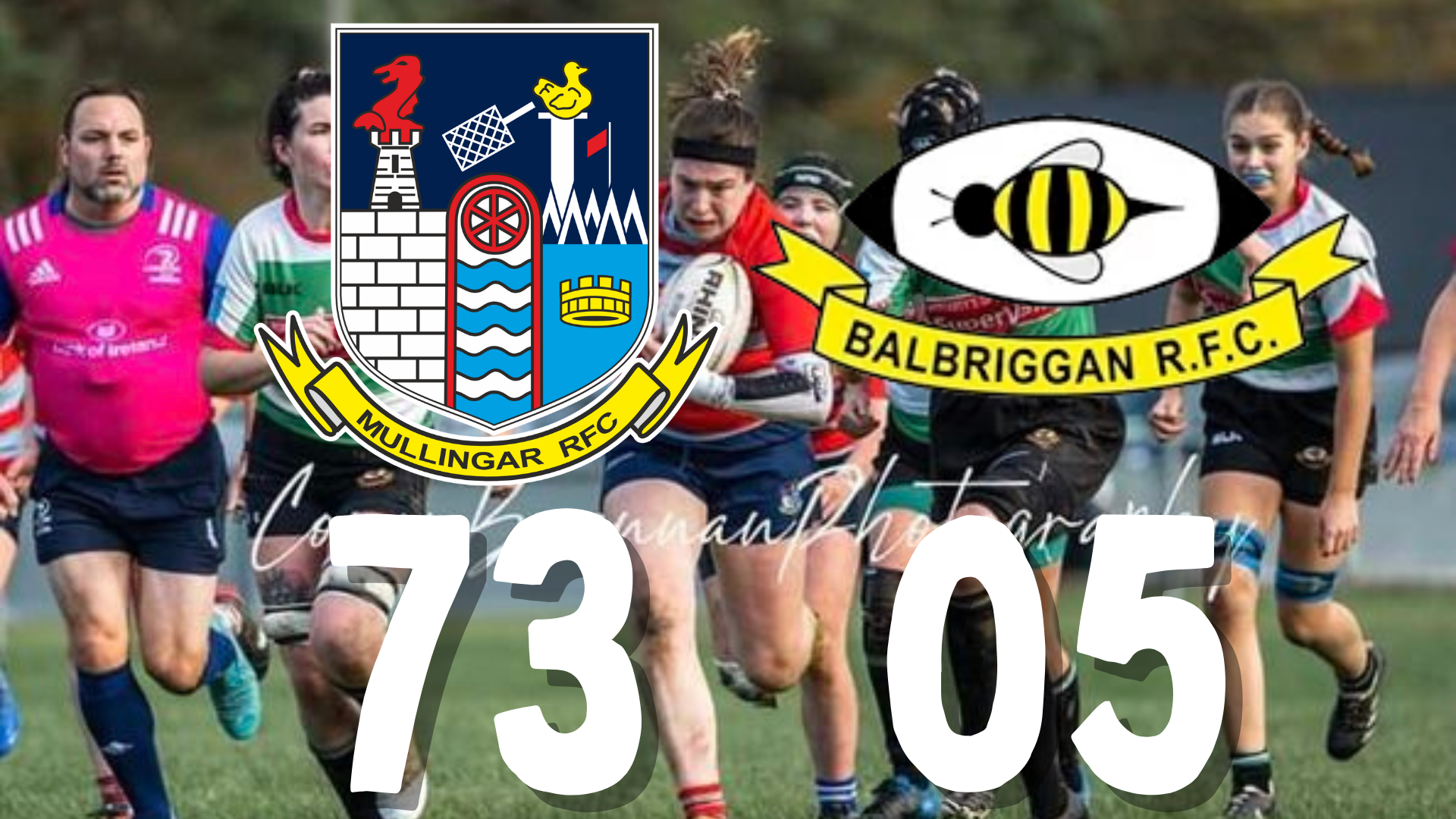 Shay Murtagh Park hosted a great day of female rugby this Sunday 06-11-22. Our minis were out in force in an almost preamble for the senior women. Luck we hoped would match the preparation and dedication the squad have exemplified over the last few weeks. Off the back of an impressive win over Naas Kieron and the girls were set for another battle, this time with home ground advantage. Ballbrigan and Mullingar have had an interesting tet a tet over the years with the former often besting the midlands women.

With a full squad and fire in their bellies the heifers set off to a flying start with a fantastic score from our trusted 15 Ciara Wynne. To top it off our power house with the mildest touch Ciara Foxe popped it over for an early lead. Balbriggan bracing themselves after the shock threw everything they had in an attempt to slow the Mullingar advance. However young Falkner decided she wasn’t going to get cold on the wing and fired in with a speedy try, Foxe again popping it over. Mullingars central combination of Aine Hayden, Ciara Fox and captain Clodagh O’Brien, showed almost telepathic accuracy with loops and lines that had the home crowd up on their tippy toes in anticipation of more points on the board. Mullingar would not disappoint with a Hayden try for good measure. The tight angle bested our kicker. But to make amends she not long after powered through with a try of her own, then to add insult to injury Foxey popped another over. Now with a 26 point lead Ballbrigan decided to do what they do best and push with all their might up the pitch, a maul got them on the board but no conversion.

Now in full swing the game presented with many ooohhh and ahhhhhh moments as Balbriggan tried to come back with the mighty forward drive they are well known for. However our backs speed and determination just proved too wiley as Robyn O’Brien kicked her heels up and added on other score to the board. No conversion. As Balbriggan pushed hard against our pack Kara Mulcahy refused to give them an inch relentless punishment was meted out as she not only closed down many a well orchestrated line break she decided she too would show what a powerful 8 is capable of and placed  another try to the list. The safe hands of Niamh Gough ensured that  Ballbrigans unrelenting drive through the centre did not disrupt Mullingars game plan. Kieron Sloyan in his gentle but direct request from the girls to be “Rootless and relentless and to turn our home ground into a fortress” did not fall on deaf ears, Ciara Wynne, Gemma Faulkner, Kara Mulcahy put ball after ball behind the oppositions try line.

Shay Murtagh park now had 3 senior games on the go, not to be distracted the heifers kept up the attack which seen the final two tries ensure Wynne got her hat trick and Makayla Mc Cormack not to see our props hard work overshadowed bullied her way over to finish up the game 73-5.

This exiting development within the squad will hopefully move Mullingar to once again being a team to watch out for, here’s to continued growth and progression and a fantastic start to a herd rebuild.

Our ever energetic Susie Burzawa earned player of the game.