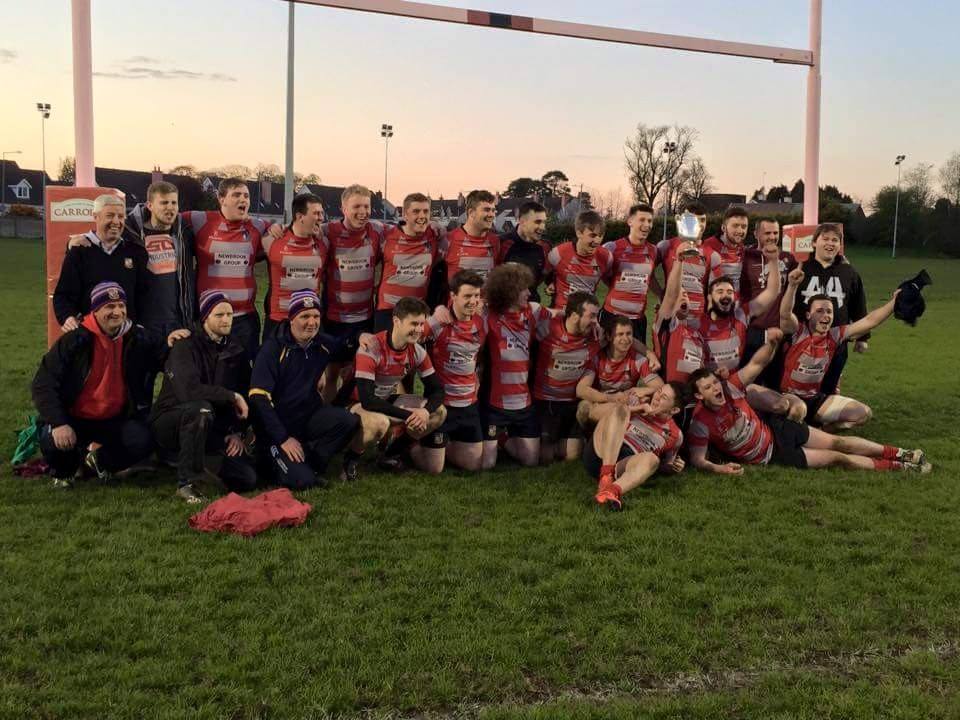 Mullingarâs highly impressive next generation turned on all the style in
the second half to retain the Harry Gale Cup in breathtaking fashion in
Tullamore on Saturday evening, and in doing so brought home an
unprecedented 4th trophy in the space of 23 hours after the 3rds, 17s and
women had shown them the way.
With a line-out that contained nine lads with first team experience,
Mullingar were odds-on favourites against a scratch Portarlington/Cill Dara
outfit, however the amalgamation kept the holders very honest for the
opening 50 minutes until the flood gates were found.
Opening encounters were very lively and PCD had not come to make up numbers.
After a miss each, Wally opened the account with a 9th minute penalty, but
this was cancelled out after 22 minutes, as Mullingar were made to work.
It took them another 10 minutes to find the gap and begin the win when
Wally, Liddy and Coade got a first meaningful gallop to win a penalty which
was put down the left line.
From the line-out OâReilly and Ennis punched through the PCD line to make a
bit of room for the dancing feet of Wallace to cross for the first try.
They even managed to frighten Mullingar honest just before the break when a
chip over the Mullingar back line looked to have undone them, only for the
deadball line to rescue the Mullingar cause and see them to the citrus 8-3
up.
Sean Og had the necessary words at halftime, and Mullingar came out much
fireier.
Again, OâReilly, Liddy and Hannon looked to make the damage holes and the
next score would have come earlier but for Dara Conwayâs rubber chest.
No matter. In just the 6th minute a huge Liddy hit forced a turnover, and
Wally kicked deep into PCD territory and they could only hack it into
safety.
From the line-out OâReilly took it on and the recycle from the left line
was fast, finding Coade at full tilt for him to knife through like he does
so well.
Six minutes later, after a poor PCD clearance, Mullingar ran back to the
line but were held. However, from the back of the ensuing scrum skipper
Hannon backed himself from 5m and was not going to be stopped.
Mullingar now looked like having goes for fun, and the dander was well up.
In the 18th minute Leahy found the next exploitable hole before feeding
Wallace on the break, who made his last play of the game feeding Ian
McGovern for Mullingarâs fourth try before then making his way to the x-ray
department.
Even without their playmaker, it now became open season as the PCD heads
began to droop.
From the re-start the Coade delivery system â fresh from a stint on the
Leinster Junior bench earlier that day â cantered in for his second, and a
32-3 lead.
Cathal Burke then became the next Mullingar player to exploit the ever
increasing holes as Mullingar began to run riot.
Again, straight from the re-start, Hannon showed the captainâs way and
burst through the PCD line before feeding Dara Conway for his turn to click
over the scoreboard.
Fair play to PCD, though, as it would have been very easy to lie down, they
pushed a dozing Mullingar all the way and got a consolation late score with
a well-placed crossfield kick.
Irked a tad, Mullingar had one arrow left in the quiver to fire, and in the
last minute man-of-the-match Davy OâReilly danced in for a very deserved
score, and let the final score a very healthy 49-10.
Team: 1. Aidan Leahy, 2. Kevin Smith, 3. Edward Nally, 4. Conor Glennon, 5.
Jack Mills, 6. Sean Ennis, 7. Davy OâReilly, 8. Niall Hannon (c), 9. Arthur
Brabazon, 10. Ronan Wallace, 11. Eoin King, 12. Cathal Burke, 13. Donal
Liddy, 14. Shane Raleigh, 15. Alan OâDonoghue. Subs used: Andrew Coade, Ian
McGovern, Dara Conway, Cillian Kavanagh, Ciaran McGuinness, Shane Brazil.
Scorers;
Tries: Wallace, Coade 2,Hannon, McGovern, Burke, Conway, OâReilly
Cons: Wallace, McGovern, King,
Pen: Wallace